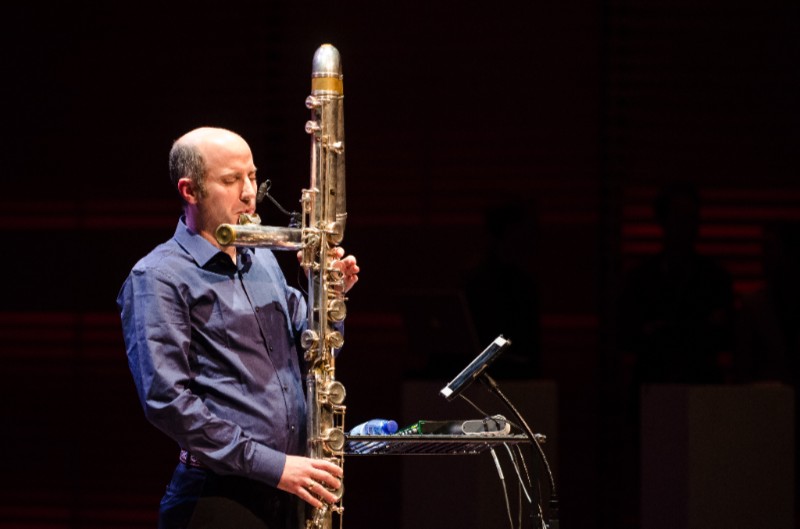 Opening the concert, McGowan improvised on Lee Morgan’s tune The Sidewinder. Emphasizing the funky ostinato bass line and adding surprising leaps into the instrument’s difficult third octave, McGowan showed off the percussive possibilities of his chosen instrument. He also gutturally sang along through his frenetic imaginings. His penchant for swiping chromatic ascents and ending with airy harmonics showed off how this instrument — requiring so much more air and so many more breaths — can be the medium for great musicianship.

Composer and pianist HyeKyung Lee joined McGowan for the world premiere of her Rustle. Focusing on mainly diatonic, repeated cells and constant shifts of texture, the work successfully paints the frenetic feeling of trees being buffeted by wind. Although McGowan prefaced the work with a comment about how hard it is to stay together during its syncopated and persistent busyness, their precise and energetic performance ended exactly together to great effect.

The first of four McGowan pieces featured piccoloist Mary Kay Fink in an industrial soundscape. Workshop’s five short movements run continuously, each focusing on a different set of sounds that the piccolo mimics and elaborates upon. Playing with admirable precision and imagination, Fink formed sirens and pneumatic sounds into various ostinati that jumped back and forth in a fractured yet organized manner.

McGowan pulled out his C flute to play his Cleveland Times with Charnofsky on piano. His precise glissandi and beautifully phrased melodies showed his equal skill on this much smaller flute. Charnofsky played the lustrous clusters and chords confidently.

Showing off his doctoral research, McGowan performed a playful, rhythmic, spoken-syllable piece called Cycle Games where he interacted with a pre-recorded version of himself on his iPad. Both McGowans spat out precise and complex rhythmic syllables in ever more energetic streams and loops. 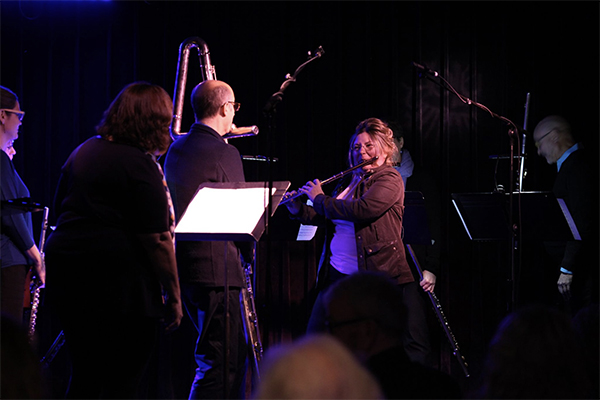 To end the evening, McGowan was joined by fellow flutists Fink, Jane Berkner, Kyra Kester, George Pope, Linda White, and Brandy Hudelson for the aptly titled In the Land of Cheese. McGowan and company began with a Mancini-esque cool jazz opener, took a turn through Ravelian impressionism, and ended with a silly, rousing finale. The performers were clearly having fun, bringing McGowan’s musical visit to Akron to a delightful close.

END_OF_DOCUMENT_TOKEN_TO_BE_REPLACED

The strings-only work by Berg has made relatively frequent appearances on the Orchestra’s programs. In 2021, the musicians recorded it for the In Focus series, and it appeared again on last year’s European tour. Friday’s rendition maintained the group’s characteristic light and effortless playing, each section blending as much as possible to echo the work’s original form as a string quartet. At fifteen minutes total, the piece is quite short, but the dense encoded musical meanings require some extra-attentive listening. Splitting up the three movements ensured that each one could be appreciated on its own. END_OF_DOCUMENT_TOKEN_TO_BE_REPLACED