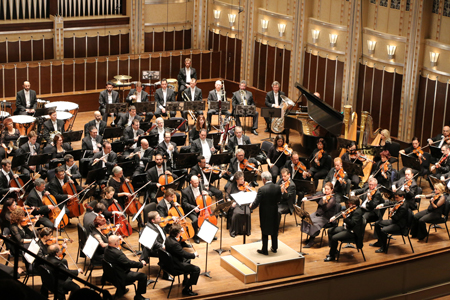 On Monday evening, November 15, the Israel Philharmonic Orchestra played Severance Hall for the first time since 2004. The concert also marked the Severance Hall debut for Zubin Mehta, world-renowned conductor and the Orchestra’s music director since 1991.

Founded by esteemed Jewish Polish violin virtuoso Bronisław Huberman in 1936, the Israel Philharmonic fulfilled his vision “to unite the desire of the country for an orchestra with the desire of the Jewish musicians for a country.” As the Nazis gained power, he struggled to rescue nearly a thousand Jewish musicians and their families from Axis nations and in so doing created the Palestine Philharmonic, the Orchestra’s name prior to the 1948 establishment of the state of Israel. With nationhood came the current name.

During Leonard Bernstein’s stewardship of over 43 years (1947-1990), the Israel Philharmonic emerged as a world-class ensemble. On Monday, the orchestra played with consummate skill and elegance. The strings were incredibly unified in intonation, timbre, and ensemble, performing with a subtlety and grace rare in a large ensemble. Four of the string players performed on “Violins of Hope” instruments rescued from the Holocaust. Woodwinds, brass, and percussion played equally well, with flutes, oboes, English horn, bassoons and French horns emerging as most remarkable.

Though it was truly a program of highlights, Antonín Dvořák’s Symphony No. 9 (“from the New World”) showed itself to be the most substantial composition, both in length and in content. It is among Dvořák’s greatest works.

In 1892 the composer moved from Europe to New York City to undertake the directorship of the National Conservatory of Music at the request of its founder, Mrs. Jeanette M. Thurber. He was enticed by a salary offer many times what he was receiving at the Prague Conservatory, and soon immersed himself in Native American music and African American spirituals, joining Thurber as an advocate for a “new American music.” After first considering an opera based on Longfellow’s poem, Song of Hiawatha, he soon decided to compose a symphony instead, completing it in eight months. Wisely composing in his own European style, he nevertheless imbued the work with pentatonic elements he associated with the new world.

Mehta shaped the performance beautifully. In the first movement, Adagio – Allegro molto, the soft, slow Beethoven-like introduction percolated with excitement as it foreshadowed the main theme in e-minor that soon emerged in the beautiful French horns. The second theme, a rustic but poignantly modal Czech country dance first appeared in the flute accompanied by lovely counterpoint in oboe and clarinet. A G major, pentatonic melody hinting at the Spiritual, Swing Low, Sweet Chariot appeared as a delicate American contrast. There were especially gorgeous solos in flute, French horn, and trumpet. The movement’s intricate stylistic mélange was made to seem inevitable in this wonderful rendition.

Equally exquisite was the second movement, Largo. The first English horn solo by Merrill Greenberg was stunningly attractive, as were the solos by oboe, clarinet, and bassoon that followed. The latter took place near the end of the first large section that closed with a beautifully in-tune woodwind chord. Two more glorious English horn solos punctuated the form, with wonderful string passages presaging the first, and the contrasting theme with oboe solo and woodwinds on the melody — supported by string pizzicatos — preceding the second. A final intense interruption and dissolution in the trombones suddenly reprised the opening theme of the first movement. Solos by the concertmaster and principal cellist, followed first by a full string statement, and thereafter by the brass choir, made for a lovely conclusion.

The delightful third movement, Scherzo: Molto vivace, looked to Longfellow’s Song of Hiawatha for its inspiration, but had its roots in rollicking Czech dances. The contrasting Trio was in the major, and, as in the Largo, was interrupted by another first-movement opening theme restatement in the French horn.

The Finale, Allegro con fuoco, seemed almost overwhelmed by a succession of first theme recurrences from the preceding movements. A scintillating clarinet solo charmed listeners before the reprises, and another brilliant tapestry of solos and full orchestra passages enlivened the powerful close.

The concert opened with Georgian émigré Josef Bardanashvili’s symphonic poem, Journey to the End of the Millennium, based upon his opera of the same name. Bardanashvilli settled in Israel in 1995, and has had great success writing 40 film scores, 50 theater productions, three operas and two rock operas.

Though Journey was a single movement composition lasting 25 minutes, the time passed quickly because of the composer’s skillful orchestration and because of his interesting, two-part structural plan. The piece centered on the story of the second wife in the opera. The first part followed the woman’s life backwards from her deathbed. Important events of her life passed before her eyes.

A powerful rhythmic section ensued with additional material in the slapstick and second violins. Thin passages with violin solo, piano, and oboe alternated with fiercely loud unison passages for the full group. Near the end, the texture became a mass of sound that was answered by chimes. A viola solo returned, followed by other principal string solos. In the midst of the excitement a percussionist carrying a djembe-like drum walked to the front stage left of the ensemble, placed the drum between his legs and played an energetic rapid solo followed by a final solo viola glissando.

The first half of the concert ended with Maurice Ravel’s La Valse, the shortest of the three works on the program. Ravel began the piece as a light tribute to the Viennese Waltz, but World War I and Ravel’s military service intervened to curtail his work. The horrors of the war left the composer vacillating between his early fascination with the form and his feelings of repugnance with what had transpired. As the Israel Philharmonic performance developed, the frenetic, almost forced, cheerfulness of the waltz was periodically overwhelmed by undesired dissonances perhaps representing the dark forces of a war filled with barbarous large-scale slaughter. Mehta took great pains in bringing out these frightening contrasts to create a uniquely powerful performance that delineated the incongruous dichotomies of an era.

Mehta chose a wonderful Slavonic Dance for his encore. He and the Orchestra raced through it with remarkable poise and precision, eliciting a standing ovation to close the performance.

Photo courtesy of The Cleveland Orchestra.

You could see the relationship at work on a practical level. Repertoire for two players at the same piano requires a certain choreography. There’s just one of each pedal to share, and the hand crossings left and right — which can be so fun to watch a soloist pull off — get more complicated when another person’s involved. At times, Pompa-Baldi drew a hand away from the keyboard and into his body, making room for Friscioni, and at the close of a few delicate phrases, the two were crouched together over the same final notes at one end of the instrument. END_OF_DOCUMENT_TOKEN_TO_BE_REPLACED

The signature sounds of these famous film scores are not so much John Williams’ invention as allusions to other classical pieces. The foreboding half-step from Jaws, growing more and more furious in the cellos and basses, shares something with Dvořák’s “New World” Symphony and Bartok’s Miraculous Mandarin. END_OF_DOCUMENT_TOKEN_TO_BE_REPLACED

Unlike most concert pianists, who seem to have taken to the keyboard while they were still learning to walk, Kharitonov only began his studies at the age of 16. But he plays with such naturalness and easy virtuosity that you’d never imagine he came late to the party. END_OF_DOCUMENT_TOKEN_TO_BE_REPLACED

Each concert in “Beethoven and Beyond” includes two of LvB’s string quartets with a contemporary work in between, usually by way of contrast, although in her introductory remarks, primo violinist Annie Fullard drew thematic connections between the pizzicati in Beethoven’s “Harp” Quartet and Jessie Montgomery’s Strum. END_OF_DOCUMENT_TOKEN_TO_BE_REPLACED