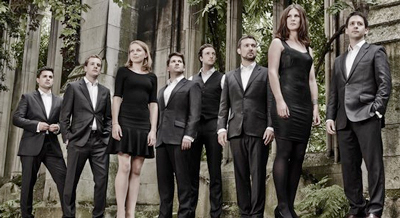 A sizeable crowd turned out to hear VOCES8 at Mary Queen of Peace Church in Old Brooklyn on Sunday afternoon, October 30. The splendid British double quartet rewarded them with a program that could hardly have been more wide-ranging: Purcell and Byrd at one end, and Nat King Cole, Simon & Garfunkel, and Harold Arlen at the other, with Mendelssohn, Palestrina, and folksong arrangements in between — all sung from memory.

Steeped in the British cathedral and university chapel tradition, VOCES8 sing that repertory flawlessly, undaunted by hyper-live acoustics like those of Mary Queen of Peace. The singers revelled in the spiky clashes of Henry Purcell’s I was glad — written for the coronation of James I in 1685 — and managed the contrapuntal lines of William Byrd’s O Lord, Make Thy Servant Elizabeth our Queen and his more madrigalesque Laudibus in Sanctis with masterful transparency.

Rearranging themselves, VOCES8 pitted quartet against quartet in a lovely performance of Benjamin Britten’s double-choir setting of A Hymn to the Virgin, then changed up their sound from British bright to Russian dark for the Ave Maria from Sergei Rachmaninoff’s Vespers. Pairing Felix Mendelssohn’s double chorus “Denn Er hat Seinen Engeln” from Elijah with the German folksong Maria Durch ein Dornwald Ging (in an arrangement by Stefan Claas) was inspired. A brilliant and flexible performance of Giovanni da Palestrina’s Magnificat Primi Toni put a fine button on the first half of the concert.

In a slightly odd aside, VOCES8 tucked in Ralph Vaughan Williams’s O taste and see and Robert Lucas Pearsall’s Lay a Garland into the lighter second half, following them with Kate Busby’s Underneath the Stars, Ben Folds’ The Luckiest, Cole’s Straighten Up and Fly Right, Simon & Garfunkel’s Sound of Silence, and Arlen’s I’ve Got the World on a String.

While British ex-choristers can sometimes sound as though they’re still decked out in cassocks and surplices when they venture into other styles, VOCES8 made an easy and convincing transition into a cappella arrangements of these popular songs. Maintaining the same creamy blend they had demonstrated in Elizabethan music, they let their hair down engagingly for more toe-tapping tunes, introducing just enough swing and change of vocal style to make it all work.

Among the many impressive features of Sunday’s performance was the ease with which each member of the ensemble spoke to the audience. As one singer noted, Justin Bieber had recently been booed off the stage in Manchester for talking too much, and VOCES8 wasn’t going to take that chance. Straight-to-the-point comments, graciously delivered, engaged the audience and only added value to the musical experience.

END_OF_DOCUMENT_TOKEN_TO_BE_REPLACED

Rodgers & Hammerstein’s Cinderella was originally produced for television in 1957 — seven years after the animated Disney film was released — and starred Julie Andrews. According to the Rodgers & Hammerstein website, it was viewed by over 100 million people. END_OF_DOCUMENT_TOKEN_TO_BE_REPLACED

The story line has its origin in an 1855 play and an 1842 farce that Thornton Wilder mined for his 1938 play The Merchant of Yonkers. When that turned out to be a flop, in 1954 Wilder made the crucial decision to re-center the show around the character of the legendary marriage broker Dolly Gallagher Levi and renamed it The Matchmaker. END_OF_DOCUMENT_TOKEN_TO_BE_REPLACED

The Dodero Center for the Performing Arts at the Gilmore Academy in Gates Mills is one feature of an impressive campus. The auditorium is shallow, the stage is deep, and the ensemble played without a shell. Throughout the program, the sound, especially in instruments’ lower registers, tended to disappear. END_OF_DOCUMENT_TOKEN_TO_BE_REPLACED