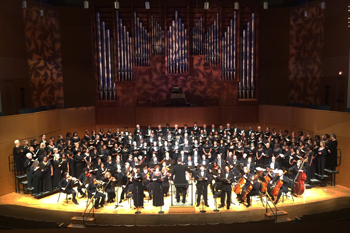 For its twenty-third season, the Western Reserve Chorale, a group of amateur and professional singers under the direction of David Gilson, has scheduled three programs which include an Ohio premiere and the second edition of “For Love of Shakespeare.” The ensemble rehearses on Tuesday evenings at Grace Lutheran Church in Cleveland Heights beginning in September, and welcomes new singers (contact Joanne Poderis at 216.791.0061).

The season will begin with a holiday concert on Sunday, December 7 at 7:00 pm at Grace Lutheran featuring the late British composer Geoffrey Bush’s Christmas Cantata as well as seasonal favorites.

The second program will be dedicated to a single work, Welsh composer Karl Jenkins’s The Peacemakers, an extended work for choir, youth choir and orchestra in the same vein as Jenkins’s The Armed Man: a Mass for Peace. Using words by Mother Teresa, Martin Luther King, Jr., the Dalai Lama, Albert Schweitzer, and Anne Frank, the work memorializes all who have died during armed conflict. Two performances are scheduled: on Friday, March 20 at 7:30 pm at Cedar Hill Baptist Church in Cleveland Heights, and on Sunday, March 22 at 4:00 pm at Mary Queen of Peace Church in Old Brooklyn.

Back to the Bard — For Love of Shakespeare, Act II, will include settings of the Bard of Avon’s plays and poetry from the last four centuries. Venues are still to be announced, but the dates are set for June 7 at 7:00 pm and June 9 at 7:30 pm.

All concerts are free, but a freewill offering will be received at each performance. For more information, visit the Chorale’s website.

END_OF_DOCUMENT_TOKEN_TO_BE_REPLACED

Supported by engagingly, yet simple staging by Cara Consilvio, a well-prepared cast of singers told the archetypal story of Cinderella with charm and flair. Framing the production was  a sparse but colorful set and wonderful lighting by Dave Brooks. END_OF_DOCUMENT_TOKEN_TO_BE_REPLACED