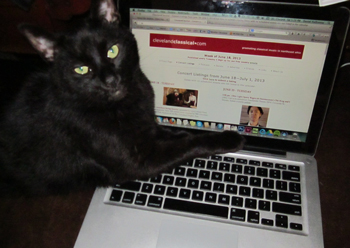 Our editorial team is always looking for fresh writing talent. If you know and love classical music and enjoy putting words on paper (or electrons on a screen), we’d be delighted to hear from you. Let us know something about your background in music, your writing experience, your particular expertise and interests, and tell us if you belong to any performing groups which might present a conflict of interest. We’re especially interested in writers who would like to cover chamber music, choral music, new music, and crossover forms. Please reply by email to the editor, Daniel Hathaway, or the executive editor, Mike Telin. We look forward to talking with you!

END_OF_DOCUMENT_TOKEN_TO_BE_REPLACED

Concerts cancelled in 2020 may have put a brief gap in Ling’s record with the Orchestra (a program every season since 1984-1985), but the ensemble’s former resident conductor more than made up for it Sunday with a performance both commanding and personal. END_OF_DOCUMENT_TOKEN_TO_BE_REPLACED