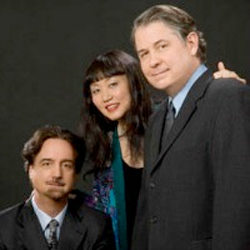 The famous piano trio with no name of its own, consisting of pianist Wu Han, violinist Philip Setzer and cellist David Finckel, will launch the sixty-fifth season of the Cleveland Chamber Music Society at Plymouth Church in Shaker Heights on Tuesday, September 23 at 7:30. The program will include Beethoven’s Trio in G, op. 1, no. 2, Shostakovich’s Trio No. 2 in e, op. 67 & Mendelssohn’s Trio in c, op. 66. A 6:30 pm pre-concert lecture will feature WCLV’s Robert Conrad in a talk entitled “Not Your Father’s Radio Station.”

Interesting relationships connect the three performers. Wu Han and David Finckel are husband and wife as well as partners who run the Music from Menlo chamber music series in California and the Chamber Music Society of Lincoln Center. And until the end of the 2012-2013 season, Finckel and Philip Setzer had played together in the Emerson String Quartet since 1976. Finckel has since set out on his own to pursue other projects, among them, continuing to perform with the Lincoln Center group, which will bring him back to Cleveland for a concert on the CCMS Series on January 13.

ClevelandClassical conducted an extensive interview with all three musicians before their March 23, 2010 appearance on the Society’s series.

The September 23 concert reflects the trio’s 2014-2015 project of performing all of Beethoven’s piano trios, a genre that interested the composer from 1793, when he wrote the three trios of his Opus 1, to 1811, when he completed the “Archduke” Trio in B-flat, op. 97. Dedicated to Prince Carl von Lichnowsky, Opus 1 was unabashedly intended to show off Beethoven’s prowess as a pianist, though by 1793, the string instruments had begun to shake off their role as add-ons (in Haydn’s trios, the keyboard part is clearly predominant). Opus 1, No. 2 in G has been described as one of the composer’s “most serene and least disturbed” compositions, and as a “gentle middle child” between the first and third trios in the set.

As a complete contrast, Han, Setzer and Finckel will follow the Beethoven with the second and last work Dmitri Shostakovich wrote for the genre. His Trio No. 2 in e, was composed in 1944 and dedicated to the composer’s friend, Ivan Sollertinsky, who had suffered a fatal heart attack at the age of 41. Intense, tortured, and technically challenging for all three players, the work ends with a “death march” movement based on a Hebraic-sounding theme the composer later used in his eighth string quartet.

The performance will conclude with Felix Mendelssohn’s c-minor Trio, op. 66, composed in 1845, the year after his violin concerto, and dedicated to Louis Spohr. Part of the finale makes use of a Genevan Psalter tune best known as “The Old Hundredth.” Johannes Brahms mined the piece for material, appropriating the beginning of the Trio’s opening Allegro for the Scherzo of his op. 5, no. 3 piano sonata, and the first theme of the fourth movement finale for the final movement of his third piano quartet, op. 60. The Trio features the kind of Midsummer Night’s Dream scherzo that only Mendelssohn could have written.

The CCMS series continues with performances on October 21 by The Belcea Quartet, on December 2 by The Juilliard String Quartet, on January 13 with the Chamber Music Society of Lincoln Center (Benjamin Beilman & Ani Kavafian, violins, Paul Neubauer & Yura Lee, violins & David Finckel, cello), on February 24 by The Jerusalem Quartet, on March 10 by cellist Steven Isserlis & fortepianist Robert Levin, and on April 21 by tenor Ian Bostridge & pianist Wenwen Duh (music and poetry in observance of the hundredth anniversary of the beginning of World War I),