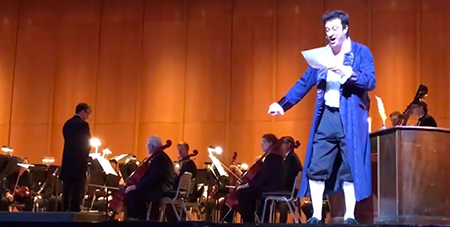 On Saturday, September 29, the Youngstown Symphony opened its 2018-19 season with an all-Mozart concert mixing theatrical, operatic, and symphonic elements. The majority of the evening juxtaposed operatic arias with excerpts from Mozart’s letters, read from stage left by actor James McClellan — costumed as the composer himself.

Conductor Randall Craig Fleischer organized the Amadeus-inspired quotes in a free-form, non-chronological order, and though connections with the arias were tenuous and difficult to fathom, the resulting visual pastiche was lively. With the reduced orchestra located in the rear, the majority of the stage was left to the two singers, soprano Misook Yun and baritone Thomas Scurich, both also in period costumes. Staging was left to the audience’s imagination.

In the medley from The Magic Flute, Scurich’s performance of Der Vogelfänger bin ich ja (“The Bird Catcher Am I”) introduced Papageno’s carefree personality to the audience. The Magic Flute motive, deftly played by principal flute Kathleen Shaffer, adorned the performance.

Most delightful and riveting was the scintillating performance of Papageno’s and Papagena’s patter duet. Costumed in bright colors and wearing red caps, Yun and Scurich balanced each other perfectly, nimbly standing out against the graceful orchestral accompaniment. The well-planned blocking sparkled and kept the stage movement lively, and the singers adroitly timed their kiss to coincide with the last chord.

Selections from The Marriage of Figaro were also enchanting. Figaro’s and Susana’s opening duet, Cinque, dieci, venti, with its charming alternating phrases, was a strong introduction to their characters. In Non piú andrai, Figaro exhorts Cherubino to exchange his foppish clothes for a soldier’s uniform and prepare himself for battle. The tempo was perfect and Scurich exited the stage in full comic march.

Further highlights were the duet and two arias from Don Giovanni. In Là ci darem la mano, the title character tries to seduce the servant girl Zerlina. After Scurich’s long solo recitative, Yun joined him, first in exchanges, and later in entrancing harmony.

Also on the program was the “Jupiter” Symphony. Beautiful flute pairings and gorgeous playing by principal bassoon Mackenzie Brauns highlighted the opening Allegro vivace. The Andante cantabile glowed with fine string playing and charming exchanges between woodwinds and strings. The orchestra showed off excellent dynamic control in the minuet, and clearly put across the movement’s complex chromaticism. In the wondrous finale they raced through the intricate fugue with excellent playing all around.

END_OF_DOCUMENT_TOKEN_TO_BE_REPLACED

The strings-only work by Berg has made relatively frequent appearances on the Orchestra’s programs. In 2021, the musicians recorded it for the In Focus series, and it appeared again on last year’s European tour. Friday’s rendition maintained the group’s characteristic light and effortless playing, each section blending as much as possible to echo the work’s original form as a string quartet. At fifteen minutes total, the piece is quite short, but the dense encoded musical meanings require some extra-attentive listening. Splitting up the three movements ensured that each one could be appreciated on its own. END_OF_DOCUMENT_TOKEN_TO_BE_REPLACED