“Groups like ours appeal to the most adventurous of listeners,” Zeitgeist percussionist Heather Barringer said during a recent Skype conversation. “They’re people who enjoy listening to something that hasn’t been listened to before.”

Beginning on Friday, January 13 at 7:30 pm at Happy Dog at the Euclid Tavern, the St. Paul, Minnesota-based new music ensemble will join forces with Cleveland’s own No Exit for three free concerts featuring experimental music that explores the possibilities of multimedia, improvisation, and electroacoustics.  Performances continue through Sunday. See below for a complete list of programs, times, and locations.

“These concerts are going to be really amazing, and each program is a little different,” No Exit artistic director Timothy Beyer wrote in an email. “These Cleveland concerts are the second leg of our multi-city collaboration. The first part of this season’s ensemble exchange program took place in St. Paul in the fall, and now Zeitgeist will be in Cleveland to return the favor.” The collaboration grew out of the two ensembles’ shared goal to bring greater national visibility to composers and performing artists who make their homes in the Midwest.

Founded in 1977 at Macalester College, Zeitgeist began as a loose collective of seven to ten musicians, but has since evolved into a quartet of two percussionists, a woodwind player, and a pianist.

Heather Barringer, who joined the group in 1990, said that the two groups have been friends since they were first introduced to each other through Cleveland State University composition professor Andrew Rindfleisch. “Andy was aware of our group and brought us to Cleveland many years ago, and that was when we first got to know Tim,” Barringer said. 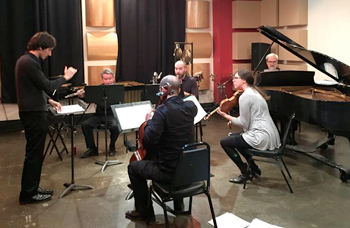 Now in its second year, the collaboration has expanded to include the commissioning of new compositions. “During this series of concerts, No Exit will be performing a work they commissioned from Ann Millikan, a St. Paul composer they met last year,” Barringer said. “For Zeitgeist’s part, we’re going to be playing music by No Exit composers Tim Beyer and James Praznik.”

As the commissioning project grows, Barringer said she hopes they will commission works around shared topics such as the two areas’ relationship to the Great Lakes. “We want to create music that highlights the contrasts and similarities between St. Paul and Cleveland.”

Given that today’s composers are inspired by a such a range of sources, I asked Heather Barringer how she characterizes the music performed by ensembles like Zeitgeist and No Exit. “It is hard to describe, but I usually use the words ‘newly created music.’ There is an incredible amount of musical variety out there — from music that is completely electronic, to music that sounds very pop-oriented, to that which does not stray very far from classical.”

Sunday, January 15 at SPACES in celebration of the Gallery’s grand opening at their new location (2900 Detroit Avenue). Performances will take place throughout the day beginning at 12:00 noon and running until 5:00 pm.
Program:
James Praznik — Almost a New Man
Mark Applebaum — The Metaphysics of Notation
Pat O’Keefe — Hello, Cleveland!
Carei Thomas — Sound Town (I & II) and Snellie
Per Bloland — Shadows of the Electric Moon
Marc Mellits — Black
And perhaps a few surprises…….

With this work, premiered in 1907, Sibelius offered a bold departure from the explosive emotionalism so prevalent in late-Romantic era music. This symphony was a renewed embrace of Classicism’s purity of form and melody, and one that, oddly enough, left many initial audiences of the day somewhat bewildered. END_OF_DOCUMENT_TOKEN_TO_BE_REPLACED

After eating a Po’boy from The Dawg Bowl Cajun food truck, I caught the first half of Brian Culbertson’s show in The Connor Palace Theatre. END_OF_DOCUMENT_TOKEN_TO_BE_REPLACED