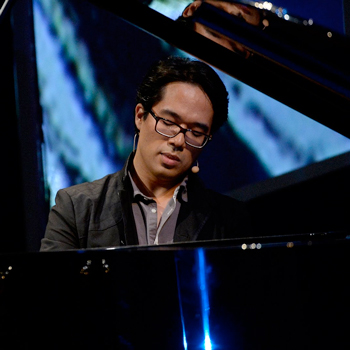 Cleveland’s own Zsolt Bognár will appear on the next Tri-C Classical Piano Series event on Sunday, February 7 at 2:00 pm in Gartner Auditorium at the Cleveland Museum of Art. “This is a program that has been very close to me,” he said in a Skype conversation yesterday. “I’ve performed it a lot privately, but never publicly here in Cleveland. It includes works that I recorded on my debut album.” The concert is free.

That CD, entitled Franz and Franz, highlighting music by Schubert and Liszt, was recorded in Berlin and released in 2013 on the Con Brio label. On Sunday, Bognár will add a set of pieces by Edvard Grieg to round out his program of 19th-century Romantic music.

The pianist will begin with four pieces by Schubert: an Impromptu in A-flat, then the Drei Klavierstücke, D. 946, “a set of three posthumous impromptus never performed during the composer’s lifetime,” he said. “They were found three years after Schubert’s death by Johannes Brahms, who adored them and published them. Recently, they’ve been getting a little more play time. The second impromptu is absolutely my favorite piece ever written. It’s slow and lyrical, with a stormy interlude, then a lyrical ‘song without words’ which is heartbreaking and time-stopping. The third piece is a lively Moravian folk dance that leaves the audience guessing where the downbeats are, because they keep shifting.”

After intermission, Bognár will move on to play a selection from Grieg’s 66 Lyric Pieces. “They’re intimate, domestic ‘album leaves’ not really intended for the concert hall, but they make a connection to some of the Schubert pieces in their conciseness of character. I like to play lesser-known pieces by familiar composers, but I also have to play pieces that are a little more familiar for the audience,” Bognár said.

Liszt comes last. “I’ll play the famous ‘Dante’ sonata, but the bridge that connects it to the rest of the program will be Liszt’s transcription of Schubert’s harrowing song Der Doppelgänger. The ‘Dante’ sonata is one of the ultimate pieces for a pianist. It uses the full resources of the piano, but it’s also an incredible journey for the musician. I’ve been performing it for over twelve years, living and evolving with it. Each year I find something new in the piece. Besides the technical challenges, it’s very difficult to hold it together structurally. There’s a lot going on. I hope that the audience won’t just take away its pyrotechnics, but also appreciate its inner journey and drama, and its moments of repose and reflection.” 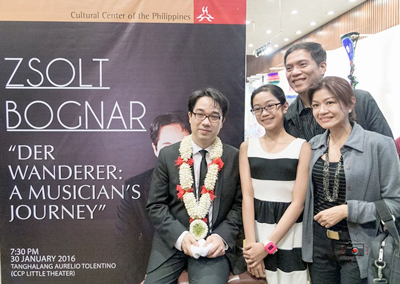 When we spoke, Bognár had just returned from a week-long trip to Manila to play a concert in the recital hall of the Cultural Center of the Philippines. “That was an amazing, totally surreal trip,” he said. “It was the first time I had been there in 23 years, and I connected with roots on my mother’s side of the family I had never explored as an adult. I was amazed by the people and the culture. Manila is so full of life. And the food! It’s all about eating and celebrating and bringing people together.

“The cultural center is the big performance venue that was constructed by Ferdinand and Imelda Marcos in the ‘60s. There were pictures hanging on the walls of all the musical icons I had grown up with, like Van Cliburn and Maria Callas. And the recital brought in so many relatives that I didn’t even know I had.”

On that trip, Zsolt Bognár proved that he’s a dedicated professional for whom ‘the show must go on’ is more than just a motto: he played the recital while suffering from bronchitis. “I was so sick I really didn’t feel like I could do it,” he said, “but I thought to myself, ‘I can’t fly 8,500 miles and not play for my relatives.’ So with a nurse waiting in the wings, I somehow walked myself onstage and said, ‘here goes nothing!’ In the moment of performing, the energy just came to me and I just somehow played. Afterwards, a lovely young women surprised me with a necklace made out of the Philippine national flower. I felt like I was living a dream.”

Bognár’s many local fans will be happy to know he’s recovering nicely and looking forward to Sunday’s performance, which represents his first full-length solo recital in Cleveland in a decade. “The last time was my master’s recital at the Cleveland Institute of Music. This program is the last in a long string of recitals this year. After that, I’m excited about taking some time off to learn new repertoire. There’s great comfort in performing ‘old’ pieces, but one doesn’t always want to rehash the past. I’m getting ready for concerts in Europe this summer — in Germany, Austria, and perhaps a couple of other places.”