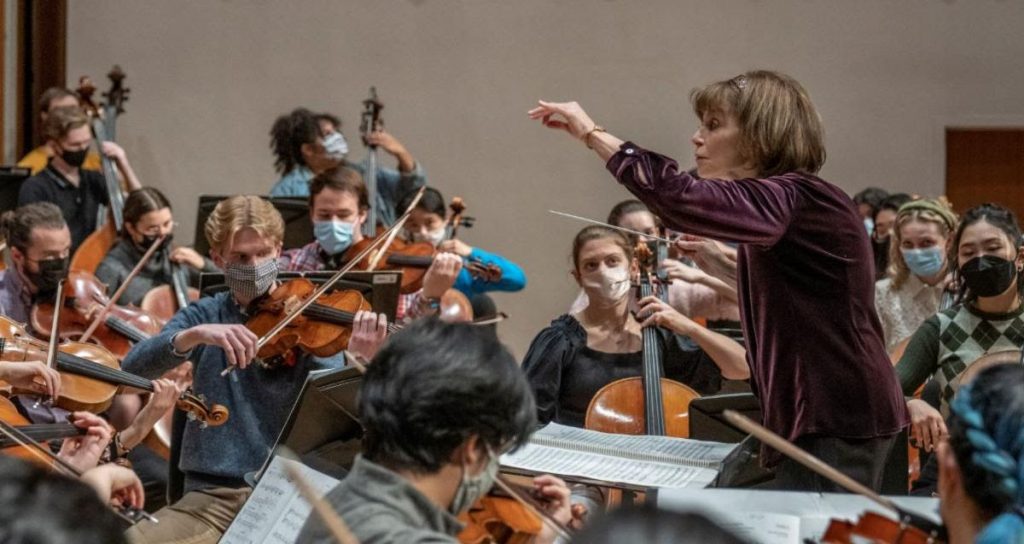 At 7 pm, guest conductor JoAnn Falletta leads the CIM Orchestra and viola soloist Alyssa Warcup in Schnittke’s Viola Concerto and Zemlinski’s The Mermaid, then at 7:30 pm, the Oberlin Orchestra takes the stage for a Fridays@Finney performance of  Gity Razaz’s The Strange Highway, Michael Tilson Thomas’ Street Song for Symphonic Brass & Erwin Schulhoff’s Concerto for String Quartet and Wind Orchestra, Rafael Jiménez conducts. Both concerts are available online as well as attendable in person.

And at 7:30 pm, Maria Schneider joins the Cleveland Jazz Orchestra as guest conductor and composer in a concert featuring selections from her album Data Lords. The performance at the Maltz PAC is free and available as a live stream.

Heads up for Saturday’s Bluewater Chamber Orchestra concert. Head over to the Breen Center at St. Ignatius High School for a 3 pm, one-hour program inspired by Cleveland sights and landmarks. Details in our Concert Listings

On this date in 1828, 31-year-old Austrian composer Franz Schubert died from typhus — even younger than Mozart when he departed this life. Among his late works are the three Opus Posthumous piano sonatas and the “Great” C-Major Symphony. The B-flat Sonata is a personal favorite that I first heard from the fingers of Leonard Shure at the dedication of a new Harvard building back in the 1960s, but fans of Mitsuko Uchida will cherish her performance here.

And the C-Major Symphony is a personal favorite of Cleveland Orchestra music director Franz Welser-Möst, as he notes in a heartfelt statement in this “On a Personal Note” episode on the Orchestra’s Adella streaming platform.

On this date in 1936, the first concert to be preserved on magnetic tape was recorded by Sir Thomas Beecham and the London Philharmonic in the concert hall of the BASF Corporation in Ludwigshaven, Germany. Hostilities followed and the German technology that made tape recording viable only became available worldwide when Allied forces seized machines at the end of World War II.

Read more about the history of analog tape recording here.

And on this date in 1957, Leonard Bernstein was named Music Director of the New York Philharmonic, making him the first American-born and educated conductor named to lead a major American orchestra. His NY Phil career was summed up by Composers Datebook:

He had conducted 939 concerts, more than anyone else in Philharmonic history. He had given 36 world premieres, 14 U.S. premieres, 15 New York City premieres and led more than 40 works never before performed by the orchestra.

At Philharmonic concerts Bernstein conducted Vivaldi, Bach, and Handel, but also Babbitt, Cage, and Ligeti. He led the world premiere performance of the Second Symphony of Charles Ives and included other elder American composers like Carl Ruggles and Wallingford Riegger on Philharmonic programs, as well as works by his contemporaries, Ned Rorem and Lukas Foss, and his own compositions as well.

Bernstein would continue to appear with the New York Philharmonic as its Laureate Conductor, and as a popular guest conductor with major orchestras around the world. His final concerts were with the Boston Symphony at Tanglewood in the summer of 1990. He died in October of that year.

Music director and conductor Daniel Meyer built his playlist around Cleveland themes and scenes. “Exploration CLE” made use of engaging selections from the classical canon and beyond that celebrated “what makes Cleveland so special.” Happily, he and his musicians avoided constructing a visual slide show, choosing to let the music speak for itself. END_OF_DOCUMENT_TOKEN_TO_BE_REPLACED

You could see the relationship at work on a practical level. Repertoire for two players at the same piano requires a certain choreography. There’s just one of each pedal to share, and the hand crossings left and right — which can be so fun to watch a soloist pull off — get more complicated when another person’s involved. At times, Pompa-Baldi drew a hand away from the keyboard and into his body, making room for Friscioni, and at the close of a few delicate phrases, the two were crouched together over the same final notes at one end of the instrument. END_OF_DOCUMENT_TOKEN_TO_BE_REPLACED

The signature sounds of these famous film scores are not so much John Williams’ invention as allusions to other classical pieces. The foreboding half-step from Jaws, growing more and more furious in the cellos and basses, shares something with Dvořák’s “New World” Symphony and Bartok’s Miraculous Mandarin. END_OF_DOCUMENT_TOKEN_TO_BE_REPLACED