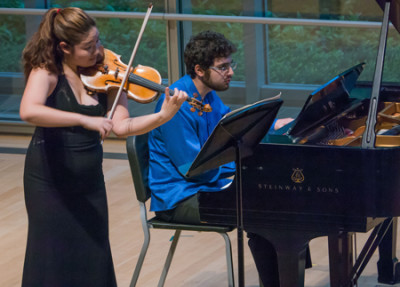 ChamberFest Cleveland added a new spin to the phrase “Something Borrowed, Something Blue” on Saturday, June 27 in Mixon Hall. Although no wedding took place, the program featured music that perfectly marries the classical ethos with jazz and folk idioms. As violinist Jinjoo Cho and pianist Roman Rabinovich prepared to open the concert with Ravel’s Sonata for Violin and Piano, suddenly from offstage, the sounds of the opening clarinet line from Rhapsody in Blue filled the hall.

As Franklin Cohen’s solo ended his last note blended seamlessly into the first note of the Ravel. Throughout the performance, Cho and Rabinovich played with passion and technical prowess. The jazz-inspired second movement, “Blues: Moderato,” was appropriately seductive. Cho tossed off the third movement’s rapid, perpetually moving line with finesse as Rabinovich provided rock-solid support. In a word, their performance was brilliant.

Edgar Meyer’s Amalgamations for Solo Bass is a brief, semi-improvisational work that melds a variety of influences, from classical to jazz to bluegrass to folk. The work is also perfectly suited for a bassist as versatile as Nathan Farrington, who relished in each musical style. 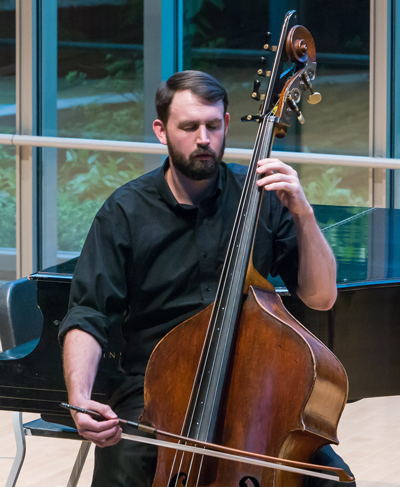 To conclude the first half of the program, Rabinovich brought out the jazzy syncopations of Bartók’s Mikrokosmos, No. 151, with personality and distinction, before joining violinist Yehonatan Berick and clarinetist Franklin Cohen, who were already seated onstage, in the composer’s Contrasts for violin, clarinet and piano. Commissioned by big band clarinetist Benny Goodman, Contrasts is a set of three folk dances — the Hungarian “Verbunkos” (fast/slow/fast) and “Piheno” (slow), and the Bulgarian “Sebes” (fast). From beginning to end, the trio performed the work’s tricky rhythms and wicked technical passages with pinpoint precision. But the performance was not only about great technique; the musical passion that each player brought to his part resulted in an inspired performance. 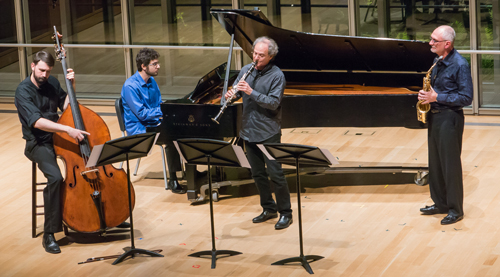 To open the second half, Cohen, Farrington, and Rabinovich were joined by saxophonist Howie Smith for an outstanding performance of Dave Brubeck’s Blue Rondo à la Turk, which was inspired by music Brubeck heard played by Turkish street musicians while on tour. The quartet brought a collective flair to the familiar tune, but this was not a watered-down arrangement, and each player took his own solo during the middle section. Luckily, many in the audience knew how to behave at a jazz concert and applauded each player’s improvised solos. And after all, this festival is all about crossing borders.

Smith and Farrington had the spotlight to themselves during Thelonious Monk’s iconic Round Midnight. Smith, who has been part of Cleveland’s jazz, classical, and experimental music scenes for some time, played with a rich sound and beautiful phrasing. Farrington laid down some impressive bass lines, and as all great bass players do, he anticipated each of Smith’s harmonic shifts with aplomb. This was impressive chamber music playing. 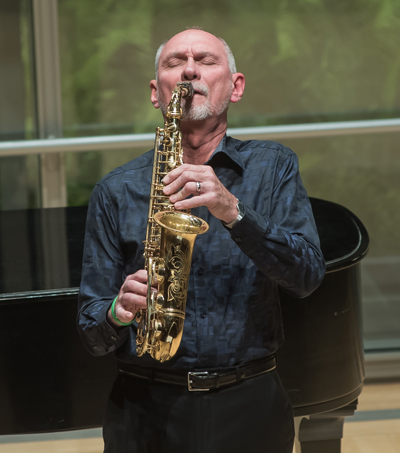 Following some quick furniture moving, the duo piano team of Anna Polonsky and Orion Weiss brought a lively wit to George Gershwin’s two-piano version of An American in Paris. Throughout, the pianists perfectly matched each other’s articulations and phrasing. The syncopated bass lines had the right amount of swagger and supported Gershwin’s melodic depiction of Parisian street scenes with a certain je ne sais quoi. This was a performance that you wanted to simply sit back and enjoy. 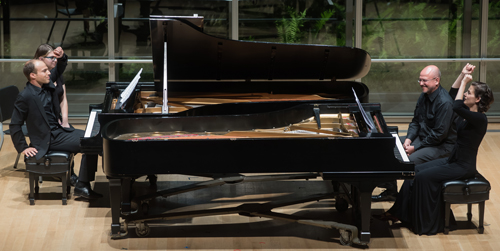 As one piano was removed from the stage and five timpani along with an assortment of other percussion instruments were carried on, Frank Cohen entertained the capacity audience as he recalled the trials and tribulations of having a son who, after abandoning the piano and the cello, decided to take up the drums and later the timpani. Once all was in place, Cohen was joined by his children, violinist Diana and percussionist Alexander, along with pianist Roman Rabinovich, for the US premiere of Dana Wilson’s A Thousand Whirling Dreams. In his composer’s notes, Wilson, a professor at Ithaca College, points out that the work’s title, as well as the movement titles (“To smash this night,” “To break this shadow,” and “Into a thousand lights of sun”), come from the ending of the Langston Hughes poem As I Grow Older.

Written for the Cohens, the piece inventively combines fast scale passages with some jazzy licks in the piano at the beginning of the fast opening movement. During the relaxed middle section, a lyrical clarinet line is played above rhythmic motifs in the violin. But it is Wilson’s canny use of percussion for accents — played on the head as well as the side of the timpani — that adds special spice. 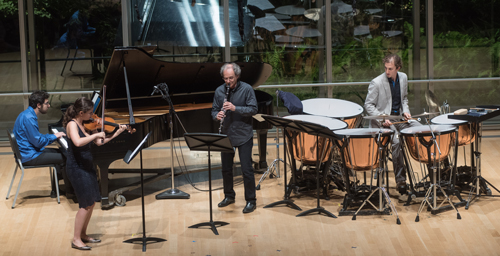 The slow middle movement opens with violin chords, played below a melodic line in the clarinet, that gradually grow in volume. At the apex, chords are accented with the addition of piano and a cymbal roll. Again, Wilson adds color by asking the percussionist to place the cymbal on top of the timpani and to move the pedal up and down, thereby changing the cymbal’s pitch.

Although the two previous movements have a hint of jazz, the concluding fast movement is the jazziest of them all. Midway through, a muted bass line in the piano provides support for a quasi-improvised clarinet line, which gradually builds to a wild race-to-the- finish. The audience immediately showed their appreciation for the new work and the performance with a standing ovation. And with that, “Something Borrowed, Something Blue,” fittingly ended with something new.