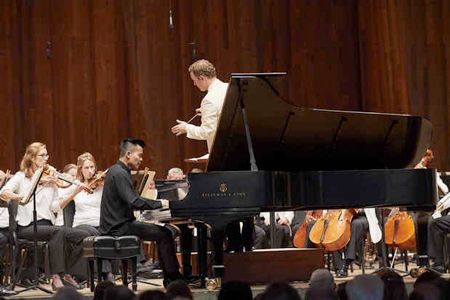 Both English works date from the Edwardian period — before the guns of August 1914 transformed English life forever. Elgar’s 1905 piece was inspired by a tune the composer heard in 1901 on a trip to Cardigan Bay, not so far from his West country homeland. The idea of Vaughan Williams’s symphony sprung from the character of the great city where the Yorkshire-born composer spent most of his life. Different as they are, both pieces share that elegiac quality that suffuses English music.

Put up to the idea by his publisher, Elgar wrote a “devil of a fugue” into the Allegro part of his piece, a challenge The Cleveland Orchestra rose to with enthusiasm. A few blurry passages took nothing away from its cheerful energy.

Mozart’s Concerto in C, No. 21, has been popularized by a 1967 Swedish film that used its Andante movement to underpin the tragic story of a Danish tightrope dancer. The poignancy of that movement, underlined by the triplets that support its slowly unfolding melody, sticks in the memory, even if this isn’t one of Mozart’s most developed slow movements — or, overall, one of the composer’s most inspired concertos.

David Fung, making both his Cleveland Orchestra and Blossom debuts, played the solo part with Apollonian clarity and understatement (sometimes vanishing momentarily into the orchestral texture). His expressive playing in the Andante was everything you could wish for, and the concluding Rondo was charming and buoyant.

The Blossom audience loved Fung’s performance and wouldn’t let him go. He finally returned to the Steinway for a dashing, infectious encore: the Presto from Mozart’s Piano Sonata in F, No. 2.

Back to Britain: Vaughan Williams’s second symphony, written at the suggestion of his friend and fellow composer George Butterworth, received its debut in March of 1914, two years before Butterworth was killed in the Battle of the Somme.

An engaging meld of “absolute” and place-evocative music, the “London” symphony visits a wide range of orchestral textures and emotions from blazing tuttis to solo harp harmonics (playing the Westminster Chimes tune), from the ebullient to the darkly introspective. If it often sounds like movie music, it’s interesting to note that Vaughan Williams influenced Hollywood — not the other way around.

Michael Francis and The Cleveland Orchestra gave the symphony a rich, committed reading, inspiring the hope that others of Ralph Vaughan Williams’s nine symphonies might find their way to the Severance Hall or Blossom stages in the future.

Jackson began the program with a recitation of Langston Hughes’ poem “Helen Keller” — the first of five poems by Hughes that served as interludes between each piece on the first half. END_OF_DOCUMENT_TOKEN_TO_BE_REPLACED

Pianos with pins and tape on strings, a bass drum and tam tam, crotales, Almglocken, and vibes. Microphones were hooked up all around the instruments. The feed was sent to speakers around the room. Lighting designer Nicholas Houfek hung incandescent globes over the arrangement of instruments from thin black wires stretching across the beams. END_OF_DOCUMENT_TOKEN_TO_BE_REPLACED

From the podium, Elim Chan set an ambitious tone for the evening. The rising star conductor, here in her Cleveland Orchestra debut, has a commanding style, and every twist and turn in Saturday’s performance tracked closely with her baton. END_OF_DOCUMENT_TOKEN_TO_BE_REPLACED