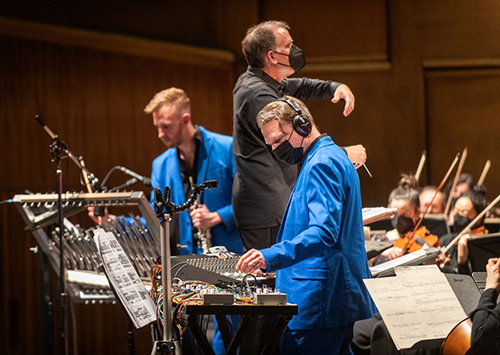 Ever since the pandemic upended concert schedules, the Akron Symphony has used the opportunity to expand its community offerings. The orchestra played a summer series in 2021, “Outside Voices,” the name alluding both to the changed setting — parks across the city — and to new programming — music outside the standard repertoire.

These initiatives continue this season with the group back home at E.J. Thomas Hall. The orchestra is maintaining its longstanding collaborations, like the annual Gospel Meets Symphony concert, but different this year is the sheer variety of local artists and new pieces that are on display.

“It gives us a cool factor we don’t normally have,” music director Christopher Wilkins said from the stage as an introduction to the world premiere on the program last Saturday, March 5.

Confluence, by Jake Gunnar Walsh and Jon Sonnenberg, was the evening’s homegrown experiment. The 20-minute work showcases not just the instruments of the orchestra but an entirely unique set of gadgets the composers brought with them. Onstage as soloists, Sonnenberg operated a switchboard of effects pedals made by Akron-based company EarthQuaker Devices, and Walsh played both oboe and “confluence harp,” a novel instrument specifically created for this performance that involves chimes, piano wire, and mallets.

Sparse passages for solo oboe offered the clearest examples of that layer of technology. Something between a sound engineer and a DJ, Sonnenberg manipulated Walsh’s part, bending pitches, sustaining notes past their releases, and capturing and replaying certain figures. 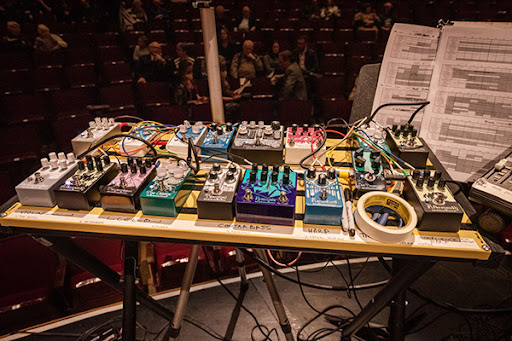 Now apply the process to a full orchestra. Confluence is not so much a piece for solo instruments (a couple of notes on the confluence harp added color more than anything) as a concerto for many players. Extended solos for piccolo, given an extra helping of vibrato, and cello, distorted to electric-guitar levels, showed where effects could enhance symphonic sound.

At other times, the pedals acted as a damper. The music crested in lush, full-ensemble passages that couldn’t ever fully bloom with the digital interference. And in delicate moments — like the tuning of soft high notes in the clarinet — the musicians had to surrender some of their usual control, a collaborative challenge that Wilkins and the Akron Symphony players were more than up for.

The orchestra stayed on mostly new ground for the concert’s second half. William Levi Dawson’s Negro Folk Symphony had its premiere in 1934 but went largely unplayed in the years that followed, and this was a first performance for virtually everyone onstage.

Savvy listeners will recognize elements of the score though. Dawson’s melodies draw on Black spirituals, keeping with Antonín Dvořák’s famous urging that American composers turn to their own folk music for inspiration. Dawson’s second movement opens with an English horn solo, maybe a nod in the direction of the Czech’s composer “New World” Symphony. 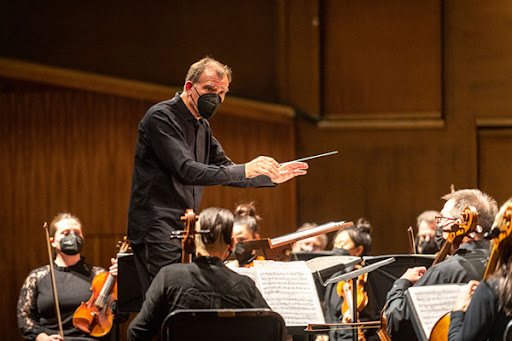 The program tied in a sense of history with its opening selections, too. The “Earthquake” from Haydn’s The Seven Last Words of Christ and the Overture from Beethoven’s The Creatures of Prometheus foreshadowed things to come.

And more Beethoven, the “Turkish March” from The Ruins of Athens, brought out a peculiar instrument, a jangly piece of Janissary percussion — a reminder that bizarre sounds have always been the purview of composers.

Jackson began the program with a recitation of Langston Hughes’ poem “Helen Keller” — the first of five poems by Hughes that served as interludes between each piece on the first half. END_OF_DOCUMENT_TOKEN_TO_BE_REPLACED

Pianos with pins and tape on strings, a bass drum and tam tam, crotales, Almglocken, and vibes. Microphones were hooked up all around the instruments. The feed was sent to speakers around the room. Lighting designer Nicholas Houfek hung incandescent globes over the arrangement of instruments from thin black wires stretching across the beams. END_OF_DOCUMENT_TOKEN_TO_BE_REPLACED

From the podium, Elim Chan set an ambitious tone for the evening. The rising star conductor, here in her Cleveland Orchestra debut, has a commanding style, and every twist and turn in Saturday’s performance tracked closely with her baton. END_OF_DOCUMENT_TOKEN_TO_BE_REPLACED