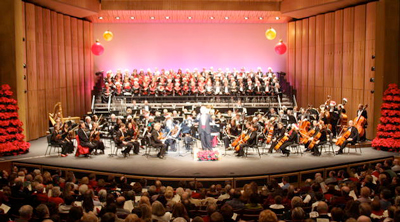 A couple of weeks ago, The Price Is Right host and former Clevelander Drew Carey urged long-suffering Cleveland Browns fans to stop attending (expletive) Browns games and instead go see the (expletive) orchestra. This prompted the Akron Symphony Orchestra to champion the comedian’s cause by offering to exchange a Browns ticket stub for a free ticket to their annual holiday pops concert, “Home for the Holidays,” on Friday, December 11 at E.J. Thomas Hall.

We weren’t told how many football fans took them up on the offer, but the hall was packed for what ASO Music Director Christopher Wilkins described as a “celebration of family and community.” Families were greeted with milk and cookies in the lobby, and one couple dressed in red and white stripes stood up when Wilkins asked who had worn their “jammies” to the concert.

A number of those in attendance were obviously first-time symphony goers, as parents could be overheard explaining, “When they are playing their instruments, you can’t say a word.” Exuberant little voices occasionally forgot that admonishment, but all was easily forgiven. New audiences were being created for orchestra concerts.

The concert began with Three Traditional Carols arranged by Arthur Harris. After a shaky start, balance was achieved between the Akron Symphony Chorus and orchestra. Two movements from Tchaikovsky’s Nutcracker featured Ballet Excel Ohio. Four ballerinas carried flower-bedecked canes and danced on point during “Dance of the Mirlitons.” In “Russian Dance,” three young dancers in Cossack costumes traded clever choreography with a particularly agile female dancer. The Chorus then sang a work celebrating Hanukkah, Light the Candles of Freedom by Justin Wilde.

Wilkins clearly enjoys audience repartee, and he is at his convivial best when conducting a pops concert. He kept a running theme throughout the night, telling us that he was glad the football fans had taken Drew Carey’s advice by “bringing your ticket here, because you ought to get something for it. Here we’ll turn the ‘Factory of Sadness’ into a factory of joy.”

Sustaita remained onstage to conduct the Akron Symphony in Jingle Bells Fantasie by James Lord Pierpont. The piece took the classic melody through a number of scenarios, including what sounded like a speakeasy, a horse race, and a sappily romantic love scene. Conductor and orchestra could not agree on a meter change at one point, marring the end of this clever little arrangement by Carmen Dragon.

In Parade of the Wooden Soldiers by Leon Jessel, we were once again treated to choreography by Ballet Excel Ohio. A line of adroit young dancers in costume displayed the herky-jerky motions of wooden soldiers, in direct contrast to the graceful pirouettes of the cute and expressive solo ballerina.

The Gospel Meets Symphony Choir joined the Chorus on the second half of the program, which opened with two traditional works arranged by David Kempers. Choir Master Jennifer Jones was the soloist in Go Tell it on the Mountain, displaying a strong voice and a formidable sense of pitch and rhythm. The overall effect of the piece was lackluster, though, and the arrangement was rather unimaginative. The same was true of Amen!, but soloist Timothy Williams’s understated yet highly infectious energy gave the ending some much-needed punch. His drawn out, melismatic cadenza solicited warm murmurs and a few soulful shouts of the work’s title.

Three young ladies from The Martell School of Dance came high-stepping onto the stage in their shiny, silver flapper outfits to dance to A Charleston Christmas. Athletic and graceful, with spectacularly high kicks, they transported us to the 1920s with winning choreography by Eric Yetter.

In all, four conductors were listed on the evening’s program. The last to be introduced was an as yet unproven talent, stemming from the tradition of bidding at the annual symphony ball for a chance to try one’s hand at conducting the orchestra. The winning bid came from an ASO board member who tasked his son, Todd Lorenzon, with the job.

The somber, diminutive twelve-year-old, dressed in a dark suit and colorful holiday tie, strode onto the stage and scrambled up onto the podium, ready to lead the group in Leroy Anderson’s famous Sleigh Ride. What followed delightfully amused and impressed the audience. He kept a steady four-beat pattern in his right hand, while deftly signaling dynamics and tossing off cues with his left. Bravo, young Todd!

Beautiful, well-balanced choral singing followed in Adolphe Adam’s O Holy Night. The orchestra then played the obligatory Santa Claus is Coming to Town, and lo and behold, the jolly, red-suited one appeared in the form of a tenor named Daniel J. Doty. After a bit of verbal jousting with Maestro Wilkins, he sang a version of Irving Berlin’s White Christmas — noting that this might be the only one we’ll find in Northeast Ohio this winter.

Flanked on stage by two young tap dancers from the Martell School of Dance in short red dresses and Santa hats, Wilkins asked the audience to stand and sing the closing number, A Holly and Jolly Sing Along. It was hard not to be filled with great glee and hope at the end of a concert brimming with such seasonal cheer and terrific local talent. It left one wondering if enough optimism had been generated to be able to share it with all those poor, sad Browns fans.