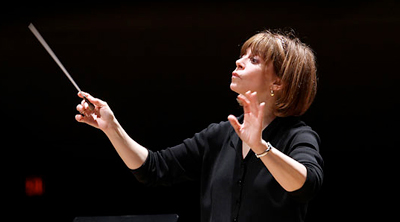 It was a fine evening for wind players at the Akron Symphony concert on Saturday, November 14 at E.J. Thomas Hall. Their distinguished playing lent many-hued colors to Johannes Brahms’s Symphony No. 2 in D, as well as to the second suite from Albert Roussel’s ballet Bacchus and Ariadne. And the program, under the direction of guest conductor JoAnn Falletta, featured the artistry of guest soloist Todd Levy in Aaron Copland’s Clarinet Concerto.

After dedicating the orchestra’s performance of Edward Elgar’s Nimrod to the victims of Friday’s terrorist attacks in Paris, Falletta led a luminous reading of the Roussel suite, which tells part of the Ariadne legend in eight continuous movements. Beginning with Ariadne’s waking from sleep and culminating in a wild, Bacchic dance, Roussel’s evocative score explores orchestra coloration from the muted to the dazzling. The brass — particularly the horn section — were glorious, and Falletta singled out violist Aaron Mossburg, trumpeter Gary Davis, flutist Barbara O’Brien, oboist Cynthia Warren, clarinetist Kristina Jones, and bassoonist Renée Dee for solo bows afterward. 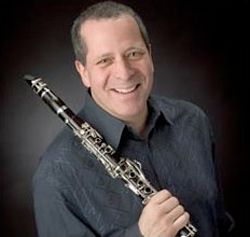 Milwaukee Symphony principal clarinet Todd Levy took the spotlight for the Copland concerto, a work the composer wrote in Rio de Janeiro in 1947 as a musical ambassador to South America — a period when the United States still took an interest in American music south of the Texas border. The concerto, scored for strings, harp, and piano, was a commission from the great Benny Goodman, who successfully toed both sides of the line between Swing and classical music.

Copland said that the piece imbibed some influences from popular music — both of North and South America — and indeed, after an opening movement when the clarinet plays long tones against a wash of sound in the strings, suddenly a slap-bass pizzicato takes the piece in a jazzy direction. Levy played beautifully, tuning high notes perfectly and tossing complicated riffs back and forth with pianist Robert Mollard.

JoAnn Falletta, conducting with a lucid, precise beat, coordinated the piece expertly, drawing generally fine playing from the orchestra, despite some scrappiness in the violin section.

Levy was the recipient of a large bouquet of flowers when he was recalled to the stage, a tribute he immediately regifted to the assistant concertmaster. She seemed surprised, but thrilled.

Falletta’s keen grasp of the score of the Brahms symphony allowed her to shape a finely balanced performance remarkable both for its translucent textures and its thrilling climaxes. Oboist Cynthia Warren and hornist Meghan Guegold made gorgeous solo contributions to the middle movements, and the wind section achieved a wonderful blend throughout. At the end, a second large bouquet of flowers appeared, this time designated for the guest conductor. She deserved it for a job well done.

END_OF_DOCUMENT_TOKEN_TO_BE_REPLACED

Rodgers & Hammerstein’s Cinderella was originally produced for television in 1957 — seven years after the animated Disney film was released — and starred Julie Andrews. According to the Rodgers & Hammerstein website, it was viewed by over 100 million people. END_OF_DOCUMENT_TOKEN_TO_BE_REPLACED

The story line has its origin in an 1855 play and an 1842 farce that Thornton Wilder mined for his 1938 play The Merchant of Yonkers. When that turned out to be a flop, in 1954 Wilder made the crucial decision to re-center the show around the character of the legendary marriage broker Dolly Gallagher Levi and renamed it The Matchmaker. END_OF_DOCUMENT_TOKEN_TO_BE_REPLACED

The Dodero Center for the Performing Arts at the Gilmore Academy in Gates Mills is one feature of an impressive campus. The auditorium is shallow, the stage is deep, and the ensemble played without a shell. Throughout the program, the sound, especially in instruments’ lower registers, tended to disappear. END_OF_DOCUMENT_TOKEN_TO_BE_REPLACED