Not all musicians have experience in that area. Nagy admitted that she herself has struggled with being interviewed in the past, especially when there are time limits involved, like on the radio. “You need to know what it is that you intend to say — what you need to get out.”

But beyond that, there’s another element that’s central to these SalonEra conversations: “We want to keep it friendly and relaxed,” Nagy said. “This is really about creating a space where people can show up as themselves.”

She pointed out that six months into the pandemic, “everybody is in a different situation,” with different comfort levels when it comes to producing their own audio and video, and different struggles with their physical environment and headspace. “You’ve got to meet them where they are and with what’s on their mind.” 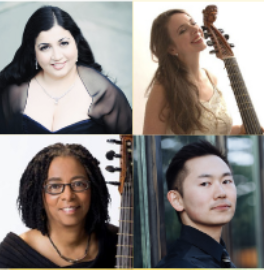 At the time of our conversation last week, Nagy was beginning to weave together all the elements of Episode Four: “Strike The Viol,” which airs on Monday, October 5 at 7:30 pm, and features viola da gambists Arnie Tanimoto, Mélisande Corriveau, and Patricia Neely, as well as soprano Sherezade Panthaki.

“We’re bringing together three viol players who don’t actually know each other, and who in a way are all doing different things,” Nagy said. Still, common threads such as manuscript sources and personal interpretation have emerged. “It turns out that both Arnie and Pat are working from some less well-known manuscript sources that require some decoding.” Another theme: tracing the history of music for the viol.

Tanimoto will perform works by Carl Friedrich Abel — “the last gamba virtuoso of the 18th century,” Nagy said — that represent the twilight period of the instrument. Neely will play a Bohemian prelude “that’s very stylus fantasticus,” and will also address the debate over its authorship. Corriveau will introduce the pardessus de viole and discuss the role that instrument played in the history of women making music. And Panthaki will perform works by Purcell and join in a viol consort song by Byrd.

While episodes of SalonEra have so far alternated between conversation and music, Nagy plans to incorporate different visual elements in these next episodes. “I was talking to Arnie, and I realized, wouldn’t it be great to show this manuscript page when we start discussing interpretation?” Nagy said. 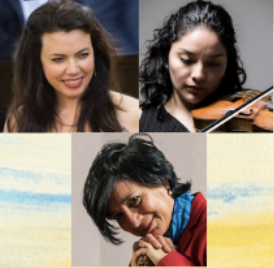 One thread that runs through parts of that episode is an 18th-century manuscript known as the Codex Martínez Compañón, or the Codex Trujillo. That will give Nagy another opportunity to share beautiful visuals: the manuscript includes over 1,400 watercolors which helped to serve as a record of life in the diocese of the Bishop of Trujillo, Peru. 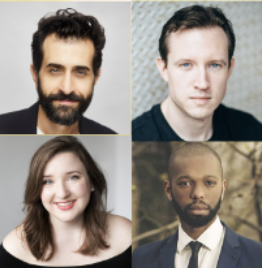 With themes of Halloween and All Saints’ Day, Episode Six (Monday, November 2 at 7:30 pm) will include conversations with Case Western musicologist Francesca Brittan, whose specialties include sonic histories of magic and supernaturalism. “It’s just going to be amazing to talk to her,” Nagy said.

Of course, the many musicians involved in SalonEra are not just names on a page. They’re people who will be interacting — perhaps reconnecting, or maybe getting to know each other for the first time. Not only delivered but created remotely, SalonEra has a special ability to bring people together who might otherwise never have met.

One example came during the making of Episode Three. Having delved deeper and deeper into Indigenous Métis songs over the years, baritone Jonathon Adams had been using materials from ethnomusicologist Lynn Whidden, whose life’s work has been preserving those songs. But they had never connected.

“Jonathon and I had this conversation, and I said, well, would it be interesting to talk to her?” The baritone’s response was an enthusiastic yes. So Nagy found Whidden on Google and reached out — and a few days later, the three of them came together for discussion.

“Now it also becomes the beginning of a relationship for them,” Nagy said. “I think that will be hugely important and productive for Jonathon in terms of expanding that repertoire and getting a deeper understanding of what’s there. So it feels a bit amazing, actually, to have been in a position to enable that.”

You can watch SalonEra on Les Délices’ Facebook page, YouTube channel, and on the series’ website. Tickets are free, with a suggested donation of $10. A live Q&A takes place after the premiere, and the episodes stay available for 48 hours.

END_OF_DOCUMENT_TOKEN_TO_BE_REPLACED

Rodgers & Hammerstein’s Cinderella was originally produced for television in 1957 — seven years after the animated Disney film was released — and starred Julie Andrews. According to the Rodgers & Hammerstein website, it was viewed by over 100 million people. END_OF_DOCUMENT_TOKEN_TO_BE_REPLACED

The story line has its origin in an 1855 play and an 1842 farce that Thornton Wilder mined for his 1938 play The Merchant of Yonkers. When that turned out to be a flop, in 1954 Wilder made the crucial decision to re-center the show around the character of the legendary marriage broker Dolly Gallagher Levi and renamed it The Matchmaker. END_OF_DOCUMENT_TOKEN_TO_BE_REPLACED

The Dodero Center for the Performing Arts at the Gilmore Academy in Gates Mills is one feature of an impressive campus. The auditorium is shallow, the stage is deep, and the ensemble played without a shell. Throughout the program, the sound, especially in instruments’ lower registers, tended to disappear. END_OF_DOCUMENT_TOKEN_TO_BE_REPLACED