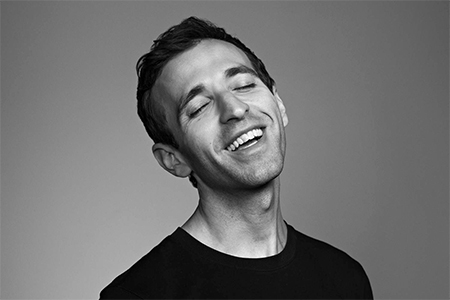 American countertenor Anthony Roth Costanzo and the Quebec-based Baroque orchestra Les Violons du Roy, with their new music director Jonathan Cohen, made a stop at E.J. Thomas Hall at the University of Akron on Tuesday, October 16, in a presentation by Tuesday Musical. The concert included music from their recent album ARC – Glass / Handel, plus a Handel concerto grosso and an excerpt from a Philip Glass symphony.

That unusual juxtaposition of Handel and Glass was not a gimmick. In one of his entertaining spoken commentaries over the course of the evening, Costanzo noted similarities between the composers, comparing Handel’s repetition of snippets of text with Glass’s repetition of musical figures. There is an even more apt characteristic of both composers that Costanzo did not mention: Handel and Glass freely re-used their music in different contexts, rearranging it for the forces currently available to them.

The majority of Glass’s works on this program were arranged especially for Costanzo and Les Violons du Roy by longtime Glass collaborator Michael Riesman with the composer’s blessing. The chamber orchestra (assembled in various groupings) seemed perfect not just for Handel, but also for Glass, whose works depend upon individual virtuosity, precision of ensemble and pitch, and control of instrumental vibrato as ornamentation.

The concert was somewhat daringly organized, with the first half containing the Handel works (four operatic arias and the Concerto grosso in d, Op. 6, No. 10, HWV 328), and the second half devoted to four vocal works by Glass, and the brief first movement from his Symphony No. 3 for string orchestra. Very few, if any, audience members defected out of fear of Glass.

Anthony Roth Costanzo is a brilliant, high-energy performer. He channels that energy into intense performances that are not just musically compelling, but dramatically aware, whether he is a Handelian hero or Glass’s ancient Pharaoh Akhenaten. His voice is strong, from the lower part of his range — in which he has a “tenor-ish” sound — to soprano notes above the treble staff. He is equally comfortable with Handel’s lengthy coloratura in “Rompo i lacci” from Flavio, Re de’ Langobardi, HWV 16 and Glass’s lyrically heroic declamation in the “Hymn” from Akhnaten.

“The Encounter” from 1000 Airplanes on the Roof is a vocalise originally performed by pop star Linda Ronstadt, accompanied by synthesizers. It becomes a different, but equally effective piece when sung and accompanied acoustically. It was also the most elaborate Glass song on the program. “In the Arc of Your Mallet” from Monsters of Grace was reminiscent of Handel’s arias in its mercurial emotions.

Costanzo’s gestures, subtly coordinated in slow-motion, illuminated the meaning of text and music. Even his stage entrance after intermission, to the long instrumental prelude to the Akhnaten “Hymn,” was slow and hypnotic, calculated to get him to center stage just before his vocal entrance.

Costanzo brought swagger of both body and voice to Handel’s “Vivi tiranno” from Rodelinda — an aria that was first sung by the superstar castrato Senesino. Costanzo’s description of castratis’ place in 18th-century Europe and their benefit to noblewomen trapped in unhappy, arranged marriages was hilarious. (For the record, he noted that he had no personal experience along those lines.)

Conductor-harpsichordist Jonathan Cohen had already made a strong impression at his Cleveland Orchestra debut this past August at Severance Hall in music by Mozart and Haydn. His work on this concert was equally impressive. Les Violons du Roy were immaculately prepared and played Glass’s music as if it were second nature.

The “Ouverture” of Handel’s Concerto grosso, Op. 6, No. 10 was precise in the sharply measured passages of the opening. The phrasing in the succeeding Allegro was unexaggerated, with natural emphasis in just the right places. The finale had a delightful “prancing through the garden” feeling, with dainty staccato phrases and solos from oboe and bassoon in dialogue with the strings. It was all perfectly judged.

Tuesday Musical should feel proud for presenting this unusual program, which was a triumph. An extended ovation brought an encore: a melancholy excerpt from Glass’s opera The Fall of the House of Usher. It began with a long harp solo, followed by a bassoon melody. The vocal line was accompanied by radiant string arpeggios, later joined by a horn obbligato. The concert ended on a gentle, soft major chord.

Northeast Ohio’s Les Délices has long been that rarest of beasts: a world-class organization so proud of its region (ours) and repertoire (distinct niches in pre-1800 music) that it never tries to be everything to everyone, paradoxically making a strong case for a broad, curious international following. In the December episode of its SalonEra series, the ensemble embraces its strengths and community to marvelous effect. END_OF_DOCUMENT_TOKEN_TO_BE_REPLACED

END_OF_DOCUMENT_TOKEN_TO_BE_REPLACED

Another I remember fondly is Gian Carlo Menotti’s Amahl and the Night Visitors.  Commissioned by NBC, the one act, made-for-television opera, premiered on December 24, 1951, at the network’s studios in New York’s Rockefeller Center. And now, through the wonders of technology, Cleveland Opera Theater has created a magical new production of the work which is available on demand through January 6, 2021 (Three Kings Day). END_OF_DOCUMENT_TOKEN_TO_BE_REPLACED

Jessen has now followed up with her second solo CD, Winter Chapel. Recorded on January 17, 2020 in Oberlin College’s Fairchild Chapel and available on Carrier Records, the album is a continuum in Jessen’s journey to push the musical boundaries of her instrument and herself as an improviser. END_OF_DOCUMENT_TOKEN_TO_BE_REPLACED