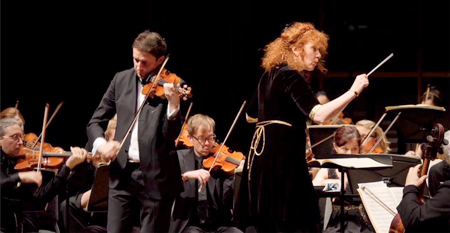 To cap off its 25th anniversary season, Jeannette Sorrell and Cleveland’s Baroque Orchestra, Apollo’s Fire, made a big leap across historical and stylistic boundaries into the early Romantic music of Beethoven. In the second of four performances on Friday evening, April 28 at the Cleveland Museum of Art, Sorrell fielded an orchestra of 49 players (huge by AF standards) and joined forces with violinist Noah Bendix-Balgley (making his period instrument debut) to lead a spirited foray into music premiered in the first decade of the 19th century.

The stage of Gartner Auditorium was as packed with instrumentalists as the house was with admiring fans. Some of those who heard the 8:00 pm performance had attended a 6:00 open rehearsal, and many more a 7:00 talk by Harvard professor and former AF board president Thomas Forrest Kelly, who engagingly sketched out the world of early 19th-century Vienna and introduced the evening’s music in a style both colloquial and erudite.

The opening bars of the Egmont Overture instantly suggested the sound world of 1810 Vienna. Gut-strung violins, violas, cellos, and basses created a warm sound overcast with an agreeable buzz. Flutes, oboes, clarinets, and bassoons, not as assertive as their modern counterparts, achieved a different kind of woody blend. Horns were brassier and trumpets milder than what 21st-century ears are used to, but still capable of adding bursts of color to climaxes.

Throughout, Sorrell called for drama, and the Orchestra responded with a kind of transparent precision that made big moments out of small changes in dynamics and articulation. Having built its business model on transportability, Apollo’s Fire has to adjust quickly to different halls, and brisk tempos and highly-calculated nuances will work better in some venues than others. On Friday, some details in the Egmont got trapped below the surface of the ensemble sound, and lines like the cellos’ descending theme begged for more prominence. 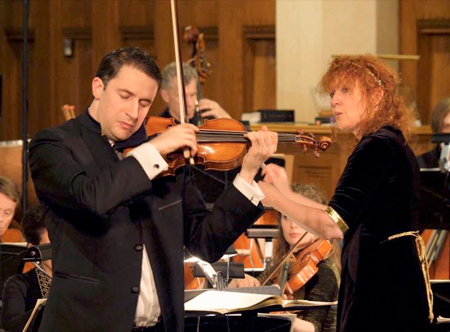 Berlin Philharmonic first concertmaster Noah Bendix-Balgley restrung his 1732 fiddle and recalibrated his pitch center to A=430 hz. for the Violin Concerto. In an interview with this publication, he said that his performance would more closely resemble chamber music than a duel between soloist and orchestra, and he delivered handsomely on that promise. Playing with exquisite lyricism and attention to detail, he engaged in an eloquent, contemplative dialogue with Sorrell and the Orchestra. His original cadenzas were tasteful, well-constructed, and replete with references to Beethoven’s themes and motifs.

Not the least of the virtues of this performance was the great dynamic range that conductor, soloist, and orchestra achieved within the limitations of period instruments. At the lower end of the spectrum, Bendix-Balgley and the strings achieved an ethereal pianissimo to open the second movement, and the sprightly energy of the closing rondo provided a welcome foil to the gentleness of the earlier movements. The audience responded with a spontaneous standing ovation.

Intending, as she said in her program notes, both to respect Beethoven’s metronome markings and achieve the interpretational flexibility that characterized the period, Sorrell whipped the orchestra into a dramatic frenzy at the beginning of the Fifth Symphony, relieved only by an oboe solo soulfully played by Debra Nagy. 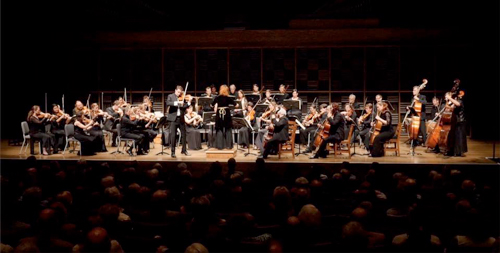 Violas and cellos produced a glorious sound at the beginning of the slow movement, answered by fine ensemble and solo playing from the winds. As Thomas Kelly had noted before the concert, almost everything in the symphony derives from the short-short-short-long motif at the beginning. That includes the main theme of the Scherzo, which in this performance led on to a lightning-fast trio which nearly but not quite spun out of control. Kelly also pointed out that the symphony is a virtual tug of war between C minor and C Major, and when the latter finally takes hold in the finale, Beethoven rushes in fresh troops — trombones and piccolo — to add an extra measure of triumph.

Having dipped its collective toe into the 19th century this weekend, Apollo’s Fire will return to playing music of the Baroque era next season. “Beethoven the Revolutionary” may have represented a one-off detour for the Orchestra, but this impressive performance makes one wish that Apollo’s Fire will wade deeper into the 19th century in the future.

Published on ClevelandClassical.com May 1, 2017.