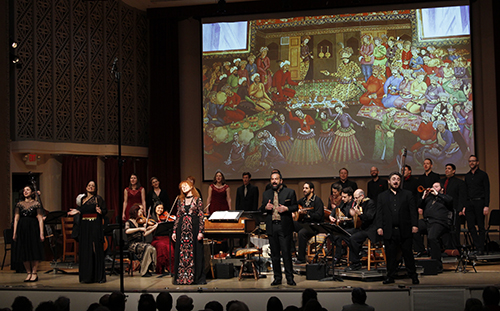 Over the course of two weekends from November 10 to 18, Apollo’s Fire celebrated the multicultural heritage of the Holy Land with “O Jerusalem!: Crossroads of Three Faiths.” This exploration of music of Jews, Christians, and Muslims was conceived and directed by artistic director Jeannette Sorrell as a sequel to their successful “Sephardic Journey” program first done in 2014. I attended the second concert on November 12 at St. Paul’s Episcopal Church in Cleveland Heights.

Organized around the geography of the Old City along with sections based outside the city walls and comparing forms of worship, this pageant ranged across secular and religious music with Ladino, Arabic, Persian, Armenian, Hebrew, Spanish, and Latin texts, included a few poetry readings, and featured a multifarious ensemble including the familiar — the usual strings, harpsichord, recorder, flute, guitar, accordion, hammered dulcimer — and the unfamiliar — oud, baglama saz, ney, tanbur, and doumbek. 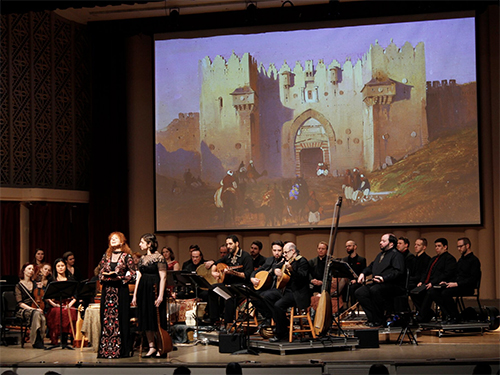 The captivating result was an often drone-based, ravishing musical landscape presented through the straightforward storytelling mode of song. Surprisingly, maybe the most interesting portions of the evening were when the music stopped for stories told by Daphna Mor (of Jewish heritage)and Ronnie Malley (of Palestinian heritage) about their own experiences of the city.

The many soloists brought a high level of artistry and passionate music-making to the proceedings. Soprano Amanda Powell once again showed off her amazing versatility, switching styles with ease. Her beautiful singing was especially powerful during the Sephardic lullaby Nani, Nani. Tenor Sorab Wadia was a captivating presence whenever he took center stage, most notably in the flirty Sephardic song A la Una yo nací, while tenor Jacob Perry stopped the show with his gorgeous and stylish rendition of the “Nigra sum sed formosa” from Monteverdi’s Vespers. 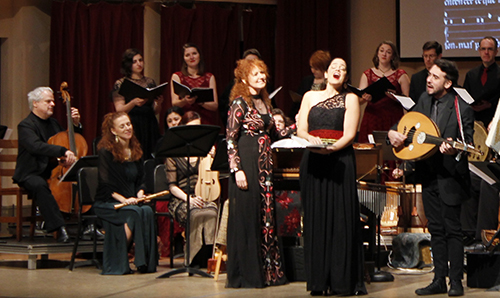 Soprano Raha Mirzadegan elegantly spun two Persian love songs, accompanying herself on the tanbur, while Dapha Mor made captivating music whether playing joyful recorder, sorrowful ney or even leading the singing of a Hebrew hymn. Ronnie Malley’s masterful oud playing and moody accordion were a highlight of the evening, and Brian Kay held his skillful own whether on lute, oud, or baglama saz. 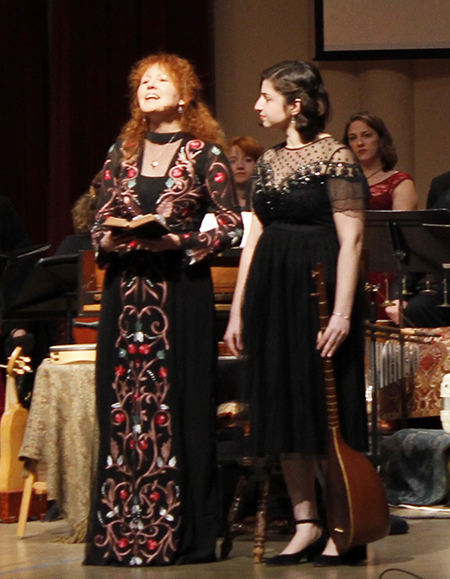 Sorrell should be proud of this enjoyable and unity-striving evening in a time when human divisions are regularly stoked to achieve dangerous ends. All the music was beautifully made, and the concert flowed wonderfully from one musical universe to another. The only thing that sounded somewhat out of place was the European Baroque music that represented some of the Christian music, but since this is the wheelhouse of Apollo’s Fire, it sparkled with the passion Cleveland’s Baroque Orchestra always brings to its music making.

For its latest In Focus episode, “Visions and Impressions,” The Cleveland Orchestra makes a gesture in the direction of welcoming winds back into the action, although principal flute Joshua Smith’s contribution to the event comes in the form of two unaccompanied pieces that leave him looking very lonely on the Severance Hall stage. END_OF_DOCUMENT_TOKEN_TO_BE_REPLACED

LD’s artistic director Debra Nagy introduces the hour-long program with a discourse on the importance of the garden and its centerpiece, the fountain, for artists and musicians of the 14th century. Later in the program, Blue Heron artistic director Scott Metcalfe expands on the subject by exploring the Trinitarian metaphor behind that bubbling source of water in the Medieval mind. END_OF_DOCUMENT_TOKEN_TO_BE_REPLACED

END_OF_DOCUMENT_TOKEN_TO_BE_REPLACED

The latest program, which visits the ghetto and palace at Mantua and the ghetto and church at Venice, uses expressive instrumental music by Salamone Rossi, Giuseppe Sammartini, Antonio Vivaldi, and Alessandro Marcello, two of Benedetto Marcello’s 50 psalm settings, and Hebrew prayers and songs associated with Passover and Purim to evoke the rich cultural life of those towns. END_OF_DOCUMENT_TOKEN_TO_BE_REPLACED