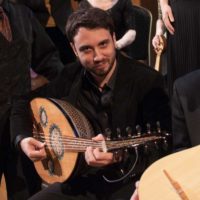 “Last year’s ‘Mediterranean Roots’ was so successful that Jeannette, Amanda, and I discussed how to rearrange it with a few additions of musicians and repertory to make it fresh,” Kay said in a telephone conversation. He added that it’s much easier to collaborate now that he and his wife have moved to Cleveland from Baltimore. “Now I can bring my guitar to Amanda’s house, where she’ll sit at the piano and we’ll play everything from Stevie Wonder to The Beatles to Medieval and Appalachian music and come up with ideas. Now Jeannette can also come by and participate.”

Sorrell was not so closely involved with the previous Mediterranean show, but Kay and Powell were keen on including her as a performer this time around. Her acquisition of a new instrument made that more of an artistic possibility. “She’ll be playing her Lautenwerk, a gut-strung harpsichord that sounds more like a harp or lute, which is nice because Jeannette says she’s always wanted to play harp. We needed to find a piece to feature the instrument, so I suggested the late 14th-century, early 15th-century Lamento di Tristano, which closely resembles Middle Eastern music and shows the interplay of cultures around the Mediterranean.”

Demonstrating the similar and complementary nature of music from different cultures is at the center of the program. “We hope it will shine a light on the shared traditions and communalities between different kinds of people,” Kay said. “Music is truly the universal language.”

The program itself is named for the frenetic 18th-century dance associated with the folk tradition in which a person who is bitten by a tarantula could dance off the spider’s venom. Two tarantellas are included on the program. “One of them, Pizzica di San Vinto, was suggested by a friend who plays in the group Hesperus,” Kay said, “and I’m excited to have it on the program.” He promises that audience members who enjoyed “Mediterranean Roots” will find other surprises around the corner in “Tarantella!”

Kay will be bringing his oud to the party — the Middle Eastern instrument played by Christians, Muslims, and Jews alike before it evolved into the Western lute during the European middle ages — as well as his lute and possibly his Baroque guitar. The latter instrument, which Kay helped build, has opened up a new chapter in his career.

“I’ve been apprenticing with the luthier Thomas Hardy, and the experience has been inspiring,” he said. “It took about three months to build the guitar, and I was impressed that the same kind of detail that goes into my work as a musician went into the construction of that instrument. The inside that no one sees looks just as beautiful as the outside.”

Kay had another insight into the meticulousness of instrument-making when his lute needed repair. “Most frets on the instrument are tied on so you can move them to create different temperaments, but those near the neck are glued in place. Last year, when it was hot and humid and I was playing very vigorously, one of the frets fell off and disappeared. I took the lute to Tom, who identified the frets as pear wood. He had a little block of that material, and we spent four hours creating and glueing on a new fret the size of a toothpick. I never would have thought that it could take that much effort.”

Woodworking has now become something of an obsession for Kay, who is busy dreaming up projects that range from building instruments to creating and customizing furniture — including fashioning a kind of crib for his and his wife’s dog, who likes to share their bed but ends up sleeping on their feet. “I would never have thought of doing that before working with Tom!”