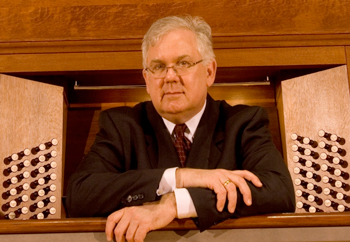 For his contribution to the Ars Organi Festival at St. Paul’s Episcopal Church in Cleveland Heights on September 19, Oberlin professor James David Christie was charged with demonstrating the eloquent musical possibilities of the North Italian-style Baroque organ built by Gerhard Hradetzky in 1986 for the rear gallery of the nave. Not only did he place the instrument in its historical-liturgical context — with the help of Steven Plank and a group of women’s voices from the Oberlin Collegium Musicum — but he went far beyond a history lesson to show how delightful music by nine composers of the period can be when matched up with the right instrument.

Hradetzky’s organ, like its sister instruments that survive in Italy, is an amalgam of Austrian, South German, and Italian influences. Unlike North German and Dutch instruments, whose façades reveal at a glance how their inner workings are organized, the Italian instrument’s pipes sit in a simple, square case. All Baroque organs reinforce the naturally recurring harmonics of an open metal pipe with higher-pitched stops speaking in octaves and fifths. But while northern instruments combine high-pitched pipes into compound stops called mixtures, Italian organs separate out each voice, allowing the player to create a variety of different ensemble combinations.

Christie began his program by showing off the instrument’s plenum (full chorus) in a Praeambulum in d by Heinrich Scheidemann, using the kind of open articulation that lets the pipes speak with the clarity of singers who are paying attention to their consonants.

A Magnificat setting in the ninth tone by Samuel Scheidt was presented in the alternatim style a Lutheran congregation would have experienced at a Vespers service, Plank’s singers intoning plainchant between Christie’s organ verses. Here we heard lovely, simpler stop combinations ranging from the 8-foot principal alone to flutes, the Nasard against the buzzy tromboncini, and a final plenum. 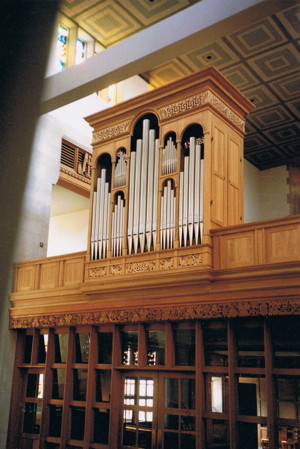 A little set of variations by Antonio de Cabezón on the Milanese Galliard favoring octave stops allowed the Collegium singers to redeploy in the aisle, surrounding the little Slajch positif organ for a rapid-fire antiphonal duel: Francisco Correa de Arauxo’s lilting Prosa del Santissimo Sacramento (aka the hymn Lauda Sion, Salvatorem). Its 24 short verses alternated between Christie in the gallery and Plank and his singers down front, concluding with a satisfying tutti that surrounded the audience.

There was one piece left in the evening’s history lesson. Moving to the gallery, the Collegium singers demonstrated how well the organ blends with voices in Girolamo Frescobaldi’s Recercar con obligo di cantare, an organ fantasy that embeds the phrase “Sancta Maria, ora pro nobis” as in Monteverdi’s Sonata sopra Sancta Maria.

Just when you thought there might be a quiz lurking around the corner, Christie changed up his programming, moving from well-behaved liturgical music to some flamboyant examples of Baroque and Rococo experimentation. 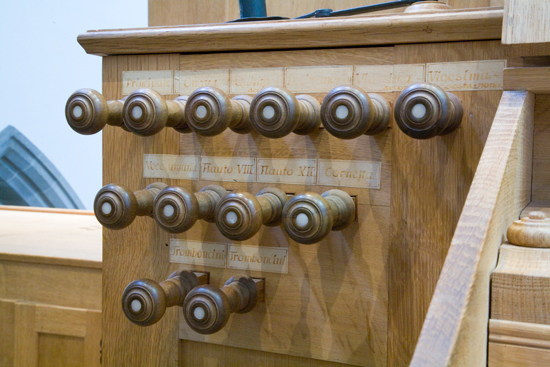 Bernardo Storace’s energetic Ciaconna in C gave the recitalist plenty of opportunity to show off his digital prowess with dizzying runs and arresting roulades. The Siciliana from Gaetano Valeri’s Sonata VI begins coyly but teases the ear with false cadences and leads to an extravagant cadenza. And for Giuseppe Cherardeschi’s Rondó in G from a 1787 Suonate, Christie brought out the Hradetzky’s toy chest, including its campanelli (25 tuned bells), timpani (four bass pipes that sound together to simulate a drum), and usignoli (nightingale, a device that imitates bird-song through pipes partially immersed in water).

James David Christie capped off his delightful program with his own arrangement of a Vivaldi D-Major lute concerto, full of fire in its outer movements, characteristically expressive in its inner Largo.

After acknowledging an enthusiastic ovation, Christie made good on his pre-concert lecture promise to show off every stop on the organ with an encore featuring more of its bell-like sonorities. If you’re looking for a performer who can explore every corner of a Baroque instrument, Christie is definitely your man.

END_OF_DOCUMENT_TOKEN_TO_BE_REPLACED

Supported by engagingly, yet simple staging by Cara Consilvio, a well-prepared cast of singers told the archetypal story of Cinderella with charm and flair. Framing the production was  a sparse but colorful set and wonderful lighting by Dave Brooks. END_OF_DOCUMENT_TOKEN_TO_BE_REPLACED