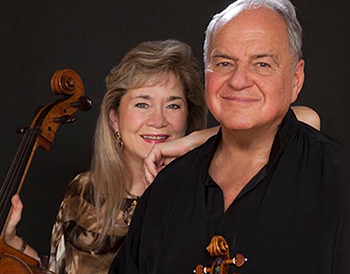 Variety, virtuosity, and vitality: by inviting the Laredo-Robinson Duo to play the penultimate concert of its 27th season, Arts Renaissance Tremont virtually guaranteed that listeners would experience all of the above. In a concert in Pilgrim Church on Sunday, April 15, the distinguished spouses Jaime Laredo, violin, and Sharon Robinson, cello, championed 20th-century and new pieces alongside familiar favorites.

Johan Halvorsen’s well-known Passacaglia for violin and cello, an 1894 adaptation of music from Handel’s Suite No. 7 for harpsichord, made for an intense opener. Handel may have supplied the notes, but the duo’s interpretation took more cues from the performance practices of Halvorsen’s day. Lyricism suffused each loop of repeated chords, and the slow section that comes near the climax of the piece was thrilling in its sudden disruption of the cycle. The players allowed the upward-charging passage just before the final cadence to become wonderfully noisy. Robinson’s tone was contained and captivating throughout.

The title of Richard Danielpour’s Inventions on a Marriage, commissioned by Laredo and Robinson, gestures toward their relationship, but it also points to a specific genre: the invention, a brief piece in two-part counterpoint often associated with Bach. However, the first movement, “Mirror Image,” recalls the music of Bartók in both its twilit mood and combination of a melodic line with its inversion. More than any other, this movement demonstrated Laredo and Robinson’s ability to align musically while remaining distinct in tone. The subsequent “Heroics,” “Reconciliation,” and “Celebration” demonstrated Danielpour’s investments in the strengths of each player.

Erwin Schulhoff dedicated his Duo of 1925 to his Czech compatriot Leoš Janáček. That influence becomes apparent within the first several notes of the “Moderato,” but by the movement’s end, the music recalls the haunting, late symphonies of Mahler. Laredo’s impressive bow work helped earn the “Zingaresca” a round of mid-performance applause, and the “Andantino,” with its lovely, expectation-flouting melody, carried both mystery and sadness. The first half of the finale threatened to kill the energy of the previous movements, but thanks in large part to Robinson’s revving and rumbling, the transition to the faster second half felt natural. Though the high-wire harmonics in the violin part sometimes got lost in the fray, the Duo made a strong case for the piece.

Laredo phrased the rising chromatic phrases in the first movement of Mozart’s Duo in G with elegance, and both players achieved a dry, dark tone in the “Adagio.” Their tight coordination in the final “Rondo” helped sustain interest through a movement that remains in emotional flux for an unusual span of time.

The final piece on the program, Kodály’s 1914 Duo, stakes out characteristic territory for the composer: several paces removed from Bartók, still folk-evoking and forward-looking, but less sonically dense. At the point in the “Allegro serioso” where Laredo took up the melody over Robinson’s arpeggios, the sparse movement sprang to life. The “Adagio,” the most sophisticated of the three movements, showed off Robinson’s mastery of double stops, and took Laredo into an extreme high register that he inhabited with ease. The episodic finale brought the piece, but not the concert, to a rousing end. The Duo played Andy Stein’s Tango as an encore, handling this deconstruction of the dance with style.

END_OF_DOCUMENT_TOKEN_TO_BE_REPLACED

Rodgers & Hammerstein’s Cinderella was originally produced for television in 1957 — seven years after the animated Disney film was released — and starred Julie Andrews. According to the Rodgers & Hammerstein website, it was viewed by over 100 million people. END_OF_DOCUMENT_TOKEN_TO_BE_REPLACED

The story line has its origin in an 1855 play and an 1842 farce that Thornton Wilder mined for his 1938 play The Merchant of Yonkers. When that turned out to be a flop, in 1954 Wilder made the crucial decision to re-center the show around the character of the legendary marriage broker Dolly Gallagher Levi and renamed it The Matchmaker. END_OF_DOCUMENT_TOKEN_TO_BE_REPLACED

The Dodero Center for the Performing Arts at the Gilmore Academy in Gates Mills is one feature of an impressive campus. The auditorium is shallow, the stage is deep, and the ensemble played without a shell. Throughout the program, the sound, especially in instruments’ lower registers, tended to disappear. END_OF_DOCUMENT_TOKEN_TO_BE_REPLACED