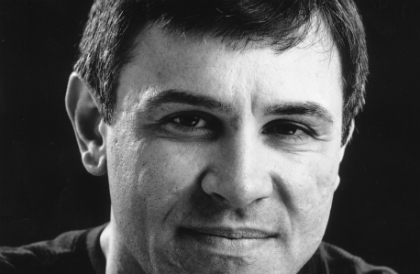 On Sunday, October 25 at 3:00 pm, Arts Renaissance Tremont will continue its 25th anniversary season at Pilgrim Congregational Church in Tremont. The concert will feature clarinetist Franklin Cohen, violist Kirsten Docter, cellist Bronwyn Banerdt, and pianists Sergei Babayan and Rafael Skorka, in performances of Ludwig van Beethoven’s Trio in B-flat, Op. 11, “Gassenhauer,” Wolfgang Amadè Mozart’s Trio in E-flat, K. 498, ”Kegelstatt,” and Franz Schubert’s Sonata in a, D. 821, “Arpeggione.” The program will also include the premiere of a new work by Lakewood-born composer David Conte written for Cohen and commissioned by Arts Renaissance Tremont for their anniversary celebration.

Conte describes his Sonata for Clarinet and Piano as a work in progress, and Sunday’s concert will feature the first movement, Allegro moderato, appassionato. Having grown up in Cleveland, Conte has long admired Cohen’s playing. “The clarinet is one of my favorite instruments and I’ve been a big fan of Frank’s since I was student at Lakewood High School,” the composer said during a recent telephone conversation from his home in San Francisco. “The commission came up very quickly, so I’m happy to have finished the seven-minute first movement. I can’t wait to hear him play it.”

Although Conte, who is chair of the composition department at the San Francisco Conservatory, has made his home on the West Coast for thirty years, he quickly said that his heart is still very much in Cleveland. He recalled studying choral music with B. Neil Davis, and piano with Berdi d’Alberti. “My mother sang with Robert Shaw and the Cleveland Orchestra Chorus, and would often take me to rehearsals. I remember that James Levine was the accompanist. My mother also had a large classical record collection, and in it was the Antal Dorati recording of Copland’s Symphony No. 3 with the Minneapolis Symphony, which I loved.”

Conte also credits the music program at Lakewood High School with nurturing his interest in music. In a recent article in The Journal of the Association of Anglican Musicians, he recalled, “I sang in the choir, accompanied their rehearsals, played piano for the jazz band, played cello in the orchestra, and played drums in the marching band. I also took music theory and music history, and did arranging for the marching band and chorus. I even played in a folk band group for which I did most of the arranging, so I had a lot of opportunities between the ages of fourteen and seventeen to make many different kinds of music.”

After graduating from high school, David Conte went on to earn his Bachelor’s degree from Bowling Green State University and study as a Fulbright Scholar in Paris, where he was one of the last students of Nadia Boulanger. Returning to the States in 1978, he earned his Master’s and Doctoral degrees from Cornell University, where he studied with noted composers and teachers Karel Husa and Steven Stucky.

In 1982, Conte, who had written his M.F.A. thesis on Aaron Copland’s Piano Quartet, had the chance of a lifetime. “My thesis advisor at Cornell was William Austin. He wrote the Grove Dictionary article on Copland and knew him well. He sent him my thesis and Copland wrote back saying how much he admired it, and invited me to come visit him, so I did.”

During the summer of 1982, Conte and Copland’s secretary David Walker took the train from New York City to Copland’s house every Tuesday morning. “I would spend two or three days a week with him listening to and playing through his music. His memory for the past was still fantastic.”

Conte’s relationship with both Nadia Boulanger and Aaron Copland is one of the things that makes him unique among composers of our time. “I’m going to be 60 years old, and I don’t know anyone my age who has had this deep and extended a contact with both of them. I feel that they both still have lessons to teach us, particularly in the present culture where there are so many different kinds of music being produced. Nadia had a 19th-century sensibility in terms of work ethic and the mastering of technique, but she was also up on the latest music.”

One way that Conte is helping to preserve Boulanger’s and Copland’s legacies as teachers is through his own teaching, both in San Francisco and at the European American Musical Alliance in Paris. “In Paris we teach in a style that I consider to be what Copland would have experienced in 1921 and what I did in 1975 under Boulanger — by studying counterpoint, keyboard harmony and analysis, singing in a choral ensemble, and writing pieces based on models.”

On Sunday, November 22 the music of David Conte will return to the Arts Renaissance Tremont stage during a concert featuring Igor Stravinsky’s L’histoire du Soldat. “A number of years ago I composed a ballet score for orchestra based on Edgar Allen Poe’s “Mask of the Red Death.” I’ve rearranged the last movement of that suite for the same seven instruments that Stravinsky uses in his work. Mine is called Fanfare: Exit to the Castle. I think it will make a great companion piece for L’Histoire. It not only uses the same instrumentation, but there is a similar allegorical aspect to the stories. L’Histoire is a morality tale, and so is Poe’s.”

Jackson began the program with a recitation of Langston Hughes’ poem “Helen Keller” — the first of five poems by Hughes that served as interludes between each piece on the first half. END_OF_DOCUMENT_TOKEN_TO_BE_REPLACED

Pianos with pins and tape on strings, a bass drum and tam tam, crotales, Almglocken, and vibes. Microphones were hooked up all around the instruments. The feed was sent to speakers around the room. Lighting designer Nicholas Houfek hung incandescent globes over the arrangement of instruments from thin black wires stretching across the beams. END_OF_DOCUMENT_TOKEN_TO_BE_REPLACED

From the podium, Elim Chan set an ambitious tone for the evening. The rising star conductor, here in her Cleveland Orchestra debut, has a commanding style, and every twist and turn in Saturday’s performance tracked closely with her baton. END_OF_DOCUMENT_TOKEN_TO_BE_REPLACED