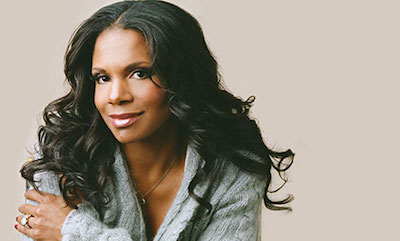 A glorious evening of music titled “Audra McDonald Sings Broadway” featured that justly famous soprano performing with The Cleveland Orchestra and conductor Andy Einhorn. The July 29 program at Blossom Music Center included a variety of songs from musicals famous and rare, from the works of Rodgers & Hammerstein to living composers.

McDonald’s full and strikingly powerful tone, combined with an intelligent understanding of her characters’ situations, gave her performances a meaningful depth. She was also funny and charming as she introduced songs and told stories. Einhorn ably led the pristine Cleveland Orchestra and took to the piano for a few songs. Augmenting the orchestra was an excellent jazz trio of McDonald’s regular collaborators: bassist Mark Vanderpoel, drummer Gene Lewin, and pianist Brian Hertz.

Jerry Herman’s forceful identity anthem “I Am What I Am” from La Cage aux Folles set the stage perfectly, showing off McDonald’s flawless vibrato and TCO’s signature precision. Twice, two songs were strung together. First was an ode: Rodgers & Hammerstein’s It Might As Well Be Spring and Lerner & Lane’s Hurry! It’s Lovely Up Here. Later in the show, McDonald prefaced an important song pairing with the recent news of white supremacist posters being put up in Croton-on-Hudson, NY, where she lives. Then she launched into a searing version of Sondheim’s Children Will Listen and Rodgers & Hammerstein’s You’ve Got to Be Carefully Taught.

A self-described nurturer of new work, McDonald sprinkled in wonderful contemporary songs throughout the program. Jason Robert Brown’s Stars and the Moon tells of someone who dreams of meeting a man with money, only to find that’s not everything. In “Simple Little Things” from 110 in the Shade, McDonald moved herself to tears as her character Lizzie, singing about the woman’s hopes for the future. As another Lizzie — this one from the unfinished musical The Other Franklin — McDonald told a baby of its origin in the heartbreaking lullaby “I Won’t Mind.” Kate Miller-Heidke’s hysterically funny The Facebook Song, about a digital friend request, brought down the house, while Adam Gwon’s I’ll Be Here was a fantastically poignant song about a woman who lost her husband on September 11, 2001.

Another theme was songs from lesser-known shows. Each was excellent in its own way: the spine-tingling “Chain of Love” from Rodgers & Hammerstein’s Grass Harp, the joyful “Sing Happy” from Flora the Red Menace, and the buoyant “Vanilla Ice Cream” from She Loves Me.

Glorious renditions of classic songs also came up along the way. Jules Styne’s Cornet Man was a bluesy romp, while the soprano’s take on Irving Berlin’s Moonshine Lullaby was just right. McDonald gave Gershwin’s Summertime a gorgeously robust flavor, while Lerner & Loewe’s I Could Have Danced All Night was a light and joyful sing-a-long. Sondheim’s Being Alive was incandescent, while Styne’s Make Someone Happy was delicious. In the last selection, Rodgers & Hammerstein’s Climb Ev’ry Mountain, McDonald was powerfully ascendant.

After a call to “remember to hold onto our humanity,” the beautiful encore was, of course, Over the Rainbow — including the lesser-known introductory verse — with only Einhorn at the piano alongside McDonald. The thrilling and memorable evening came to a close with the whole audience singing along to the last line: “Why, oh why, can’t I?”

Jackson began the program with a recitation of Langston Hughes’ poem “Helen Keller” — the first of five poems by Hughes that served as interludes between each piece on the first half. END_OF_DOCUMENT_TOKEN_TO_BE_REPLACED

Pianos with pins and tape on strings, a bass drum and tam tam, crotales, Almglocken, and vibes. Microphones were hooked up all around the instruments. The feed was sent to speakers around the room. Lighting designer Nicholas Houfek hung incandescent globes over the arrangement of instruments from thin black wires stretching across the beams. END_OF_DOCUMENT_TOKEN_TO_BE_REPLACED

From the podium, Elim Chan set an ambitious tone for the evening. The rising star conductor, here in her Cleveland Orchestra debut, has a commanding style, and every twist and turn in Saturday’s performance tracked closely with her baton. END_OF_DOCUMENT_TOKEN_TO_BE_REPLACED