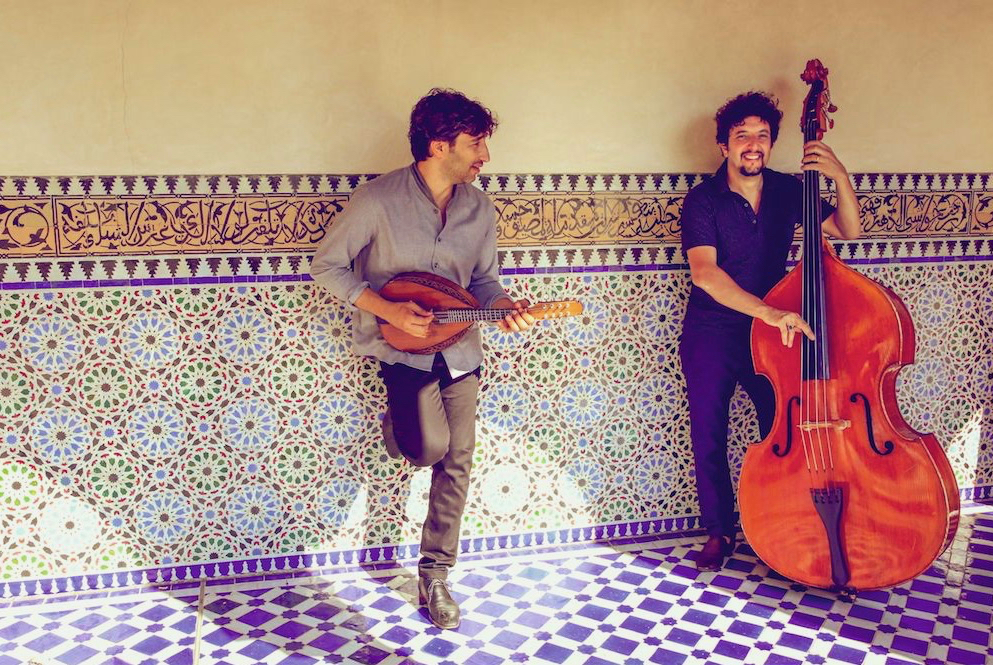 Avi Avital remembers meeting Omer Avital — no relation — in the cafeteria at the Jerusalem Music Academy.

“We both had this look on our faces like, ‘What’s in that strange instrument case?’” Avi told me during a recent phone call. “He was with his oud, and I was with my mandolin.”

They started talking and discovered how much they had in common. “There’s the family name, for one thing,” Avi said. “We’re not blood-related, but it’s the DNA of our heritage — Avital is a name that is typical to Jewish Moroccan families.” Both Avi and Omer were born and raised in Israel, their parents having immigrated there from Morocco. “We connected very fast.”

The occasion to collaborate came in the form of an open-ended invitation from a music festival in Germany, Avi said. “They just asked me to come up with something I had never done before — they gave me carte blanche — and it was very quick in my mind that I should do something with Omer.”

That partnership continues on Wednesday, April 10 at 7:30 pm in Gartner Auditorium at the Cleveland Museum of Art, when the Museum’s Performing Arts Series presents “Avital Meets Avital.” Avi and Omer, who plays double bass in addition to oud, will be joined by pianist Yonathan Avishai and percussionist Itamar Doari in this mix of Moroccan, North African, Israeli, Mediterranean, folkloric, jazz, and classical music. Tickets are available here.

Omer is more of the jazz Avital, while Avi is more the classical — he’s the first mandolin soloist to be nominated for a classical Grammy. He’s also recorded CDs containing his own transcriptions of Bach and Vivaldi, in addition to the album version of Avital Meets Avital.

Blending different musical backgrounds can lead to rich and surprising results, but it can also feel uncomfortable at first. Avi remembers from early rehearsals that when it came time to improvise, “I would kind of freeze, and not be at my 100%.” And when they read classical music, the jazz musicians in the group “played like 70% of what I knew they could do.”

During a break, they talked it over. “They asked, why are you so hesitant when you improvise?” Avi said. “And I remember saying that when I have the score, I feel safe — I just have to play the right notes at the right time. With improvisation, I’m afraid to make mistakes because I don’t know what to play.”

It was exactly the opposite for Omer. “He said that with the score on his music stand, every note that’s printed there is an opportunity to make a mistake, but when he improvises, he simply cannot make a mistake,” Avi remembers. “So that was a big ‘aha’ moment for both of us. It kind of set me free to be more experimental and really to develop my language. And now I’m not afraid of improvising when I play concerts.”

That moment also gave Omer and the other jazz musicians in the group more of an understanding of how Avi thought about music — including his focus on finesse, and his desire to play something the best way each time. “As a classical musician, when something sounds really nice, I want to do that in all the future concerts,” Avi said. “And for jazz musicians, creating a different experience every time is almost a religion. Sometimes our project has a certain architecture — it’s a bit more planned than the usual jazz concert.”

I was also curious to know how Avi built a career as a solo mandolin player. Was there any sort of template for him, or did he feel like he had to chart his own path?

“Definitely the second,” he said. “If I were a pianist or violinist, I would have probably followed in the footsteps of the giants before me — the same competitions, the same repertoire, with some variations. I simply did not have a model, so I wasn’t even sure that I could have a career playing the mandolin.

“That could have been scary, but I always saw it as a great advantage, and also a great adventure. It quote-unquote ‘forced’ me to be really creative in how I built my artistic path. Plus, I’ve always been curious about different genres of music, so the desire to experiment with them came very organically.”

Avi sees a similar curiosity and versatility in The Knights, the New York-based chamber orchestra with whom he recently toured Europe. “They’re exactly reflective of the kind of artistic approach that I like, that I believe in, and that is kind of my compass. They’re part of the generation of musicians who can play Baroque like a Baroque orchestra, Classical like a Classical orchestra, and contemporary music with a deep understanding of its rich layers of references. And their energy!”

The tour lasted for fifteen concerts. “That’s unusual, and it was very fun. I played the same concerto fifteen times — the Bach d minor, originally for keyboard, which I arranged some years ago. But that meant that I could go deeper and deeper into the music, and every evening understand something new.”

The cimbalom was the feature of the show, an instrument capable of taking on many personas. Its performer, Chester Englander, has shaped his career around the instrument, and has inspired composers to write more repertoire for it, some of which was presented on the program. END_OF_DOCUMENT_TOKEN_TO_BE_REPLACED

You wouldn’t expect that acoustic from a glance at the nave, which is wide and long, but not especially lofty. But when I guest conducted a local amateur choir and professional orchestra in Beethoven’s Mass in C there a few years back, during the first rehearsal we released the final chord of the “Gloria” and listened in astonishment for the next several seconds. The sound continued to roll down the space like the big wave that surfers dream about. END_OF_DOCUMENT_TOKEN_TO_BE_REPLACED