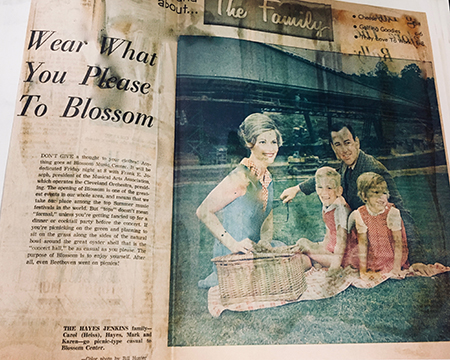 lawn), the relaxed dress code (an Akron Beacon Journal headline read “Wear what you please”), and the planned broadcast of the program in color on Channel 3 and on WCLV-FM, all added to the excitement. 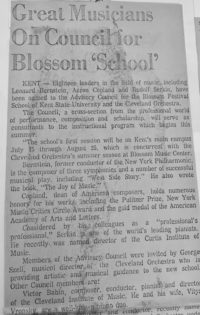 Meanwhile, the Kent/Blossom Music School was gathering a list of esteemed supporters in preparation for its own opening –– Leonard Bernstein, Aaron Copland, and Rudolf Serkin were all named to the School’s Advisory Council. The first session was to take place on Kent’s main campus from July 15-August 25, in conjunction with The Cleveland Orchestra’s summer season. Associate conductor Louis Lane, who worked with music director George Szell to create the School, was to be the associate director of the school along with Dr. John A. Flower, the dean of Kent’s College of Fine and Professional Arts. Other Council members, all invited by Szell, included Victor Babin, Pierre Boulez, Alberto Ginastera, Josef Gingold, Howard Hanson, Raymond Kendall, Leon Kirchner, Paul Henry Lang, Peter Mennin, Leonard Rose, Gunther Schuller, William Schumann, Robert Shaw, Joseph Szigeti, and Robert Ward.

An interview with Szell in the Beacon Journal, calling him a “Musical Pilot, not a Myth,”
ran on July 18, giving the conductor’s perspective on the opening of the Center. A huge proponent for the existence of this summer venue (see our previous article), Szell was deeply involved in planning the construction of Blossom and the philosophy that guided it. “Blossom will be different from the indoor concerts –– less formal and, of course, many more people,” Szell told the Beacon Journal’s Theodore Price, citing the lack of ticket availability for Thursday and Saturday performances during the Orchestra’s Severance season. “The whole idea of the Blossom Festival is to give the greatest possible number of people the opportunity to hear the orchestra.” 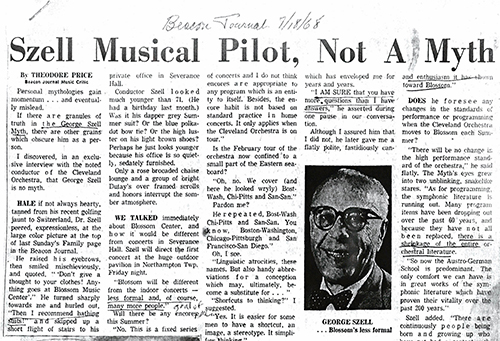 Szell also mentioned the interest and enthusiasm shown by the city of Akron in its unofficial adoption of The Cleveland Orchestra as a result of Blossom’s location, and the two concerts exclusively designed for young people included during the season. This emphasis on accessibility of music, and getting more people to hear the orchestra, was clear in every step taken by the Musical Arts Association. The openness of the Blossom pavilion and its location between Cleveland and Akron further added to this aspect, resulting in the label “Midwest Music Center” from the Chicago Sun Times.

Not all of Northeast Ohio was cheerful, however. Race riots in Akron led the city to impose a curfew from 9:00 pm to 6:00 am, which many worried would affect the attendance at Blossom’s opening. One of the Orchestra’s rehearsals was cancelled because of the curfew. Akron’s mayor agreed to give citizens a special pass on the night of the opening, but then reversed his decision after more protests, even though many people had already left for the concert. By the time the concert ended, he had called off the curfew altogether. This unrest was blamed for the size of the crowd on the lawn July 19, which was smaller than hoped. Still, the total audience numbered almost 6,000. The 4,643-seat pavilion was packed. 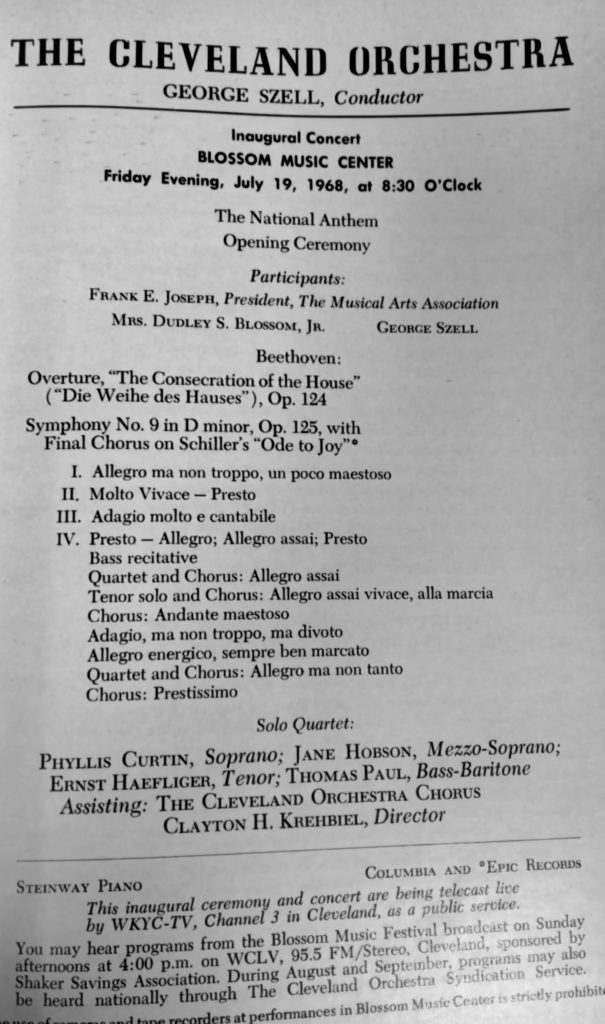 Beethoven, the reviews came rolling in. The Plain Dealer’s Robert Finn called Blossom “a visual, musical, acoustical, and artistic triumph.” Massillon’s Evening Independent called the music and acoustics “electric, ecstatic, and thrilling.” Many critics praised the pavilion’s design, with Thomas Willis from the Chicago Tribune calling it “brilliantly designed… Like the interior of a giant organ case, it is first of all designed for music.”

However, concerns about sound remained. The amplification of the orchestra, necessary for those listening on the lawn, proved controversial. The New York Times’ Harold Schonberg praised the acoustics designed by Christopher Jaffe and Heinrich Keilholz, but felt that that interior amplification system was abused: “But no engineer sitting before a control board can resist tinkering with the sound, and sure enough the time came when the strings were boosted by electronic means. In a hall of this quality it was completely unnecessary, and perhaps a lock should be put on the controls.” 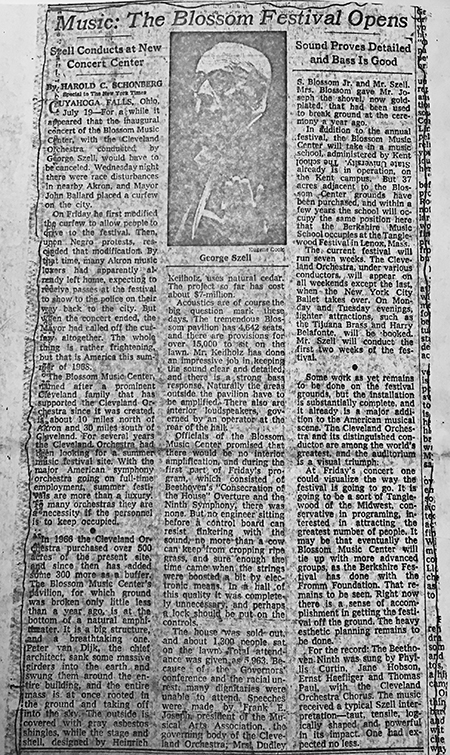 Even Thomas Willis, who felt that the chorus in “Ode to Joy” was “unimpeded by any dry, high-fi adjustment and tampering,” said that the four solo voices were not as distinct when amplified as they might have been in a closed hall. Robert Finn noticed that the sound reverberated less when the pavilion was full of people, which he thought gave it some dryness. Despite all the sound concerns and nitpicking, reviewers widely agreed that the chorus was memorable and the concert was a happy and successful event.

The rest of Blossom’s first season consisted of classical and popular performances. The Orchestra concerts featured more Beethoven, Haydn’s Symphony No. 93 in D, Strauss’s Songs with Orchestra and Mahler 4 featuring soprano Elisabeth Schwarzkopf, and an all-Brahms program featuring violinist Edith Peinemann. A well-advertised folk concert starred Arlo Guthrie and Judy Collins, while Ravi Shankar was also a draw. The Orchestra season concluded with a performance of Carmina Burana featuring the newly-formed Blossom Festival Chorus, which will be performed again this year on August 25, 50 years to the day. After the final Cleveland Orchestra concert, the New York City Ballet came to Blossom’s stage for a series of shows, and Louis Armstrong and his band capped off that inaugural season.

The opening Blossom season also saw the formation of The Junior Committee, created by the Women’s Committee to help the Orchestra. The Juniors consisted of 50 women ages 21-35 who planned to open a permanent shop at Blossom the next year to sell camp stools, sun- and rainwear, and gift items. The shop was staffed by Committee volunteers and partnered with the North Summit Women’s Committee to sell coupon books to raise money for the Orchestra. A luncheon at the end of the season resulted in plans to increase the Committee’s scope for 1969, and to continue the “spirit of Blossom.” 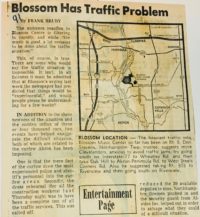 This spirit had left a strong impact on concert-goers, but even with a successful first season, obstacles lay ahead. Blossom’s traffic problem became apparent almost immediately, with multiple newspapers running articles that advised readers to remember what lot they left their car in, and gave tips on roundabout exits that would avoid the main stream of traffic. Plans for more exit roads were discussed as a result. 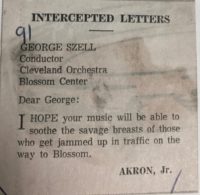 The “Blossom Boom” was another cause for concern,
although many papers called it the “Varoom.” Seemingly occurring only during quiet parts in the music (of course), many theories were offered as to its cause, all including temperature shifts in the pavilion. The “Boom” wasn’t fixed until 1971, and then came back again in 2014, but was fixed with a teflon coating in 2016.

Finally, Robert Finn summed up the other concerns in his Plain Dealer article on September 1, 1968, titled “Blossom’s first year was good, but there are growing pains ahead.” Finn interviewed Marshall Turkin, Blossom’s manager, who thought traffic problems and crowd size to be natural results of a shiny new venue –– once the “mystique” wore off, crowds might shrink. The Pops shows raised a good amount of revenue, and the symphony nights attracted many, but looking ahead, he hoped to book more kinds of concerts on many different nights of the week. And with the racial unrest continuing, “we’ll have to be creative,” Turkin said. And Szell had his own demands (see below). 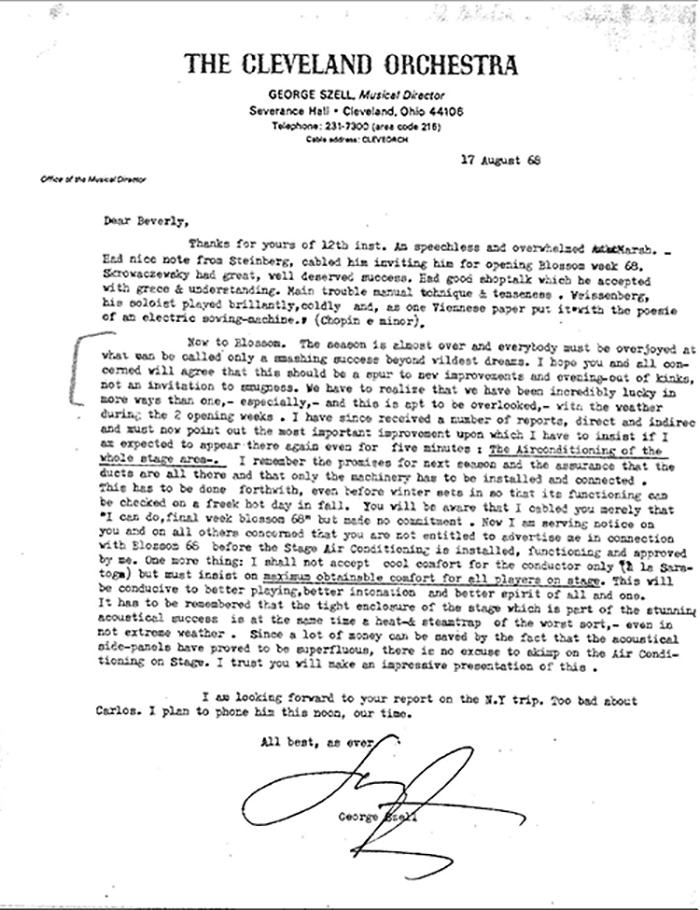 Though Blossom has now reached the age of 50, its retains its novelty. People don’t often get to go to concerts in the middle of a National Park, especially not orchestra concerts, and Blossom has boasted an impressive list of events that keep people coming. Look out for our final article in this series, which highlights 50 years of music from Itzhak Perlman to Pink Floyd.

END_OF_DOCUMENT_TOKEN_TO_BE_REPLACED

Supported by engagingly, yet simple staging by Cara Consilvio, a well-prepared cast of singers told the archetypal story of Cinderella with charm and flair. Framing the production was  a sparse but colorful set and wonderful lighting by Dave Brooks. END_OF_DOCUMENT_TOKEN_TO_BE_REPLACED