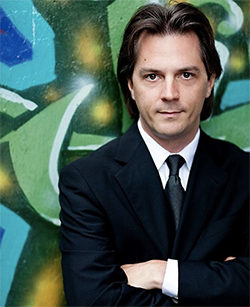 I reached conductor Daniel Meyer on the road between his home in Pittsburgh and one of his regular podium positions in Erie, where he was rehearsing for a concert last weekend with the Erie Philharmonic. I started by congratulating him on his recent appointment as conductor of the Lakeside Symphony.

Daniel Meyer: I’ve been looking for a summer home for a while. My family loves Lakeside, and I’m very excited to have the opportunity to work there. One promising thing is its collaborative possibilities. We’re looking to expand what we do.

DH: Besides Erie, what other conducting positions do you hold down at the moment?

DM: I also conduct the Westmoreland Symphony just outside of Pittsburgh. I just got back from a guest appearance in Silicon Valley with the former San José Symphony.

DH: Your concerts this weekend with BlueWater Chamber Orchestra are titled “Resonate Re-invention,” and I understand they’ll feature pieces that have been reworked in some fashion — either from music by other composers or from compositions of their own.

DM: Sometimes I like to start with a theme and see what kind of program I can create around it, and sometimes a theme presents itself after I’ve selected the work. Sometimes themes emerge that I didn’t even consider when I was putting the music together. I definitely wanted to perform Golijov’s Sidereus and the Adagio from Bruckner’s String Quintet, and I started to think that both of those composers were very well known for their sacred music. Of course Schubert had very strong ties with church music, and Vivaldi was an ordained priest. That’s an interesting tie between the composers, but it’s not a compelling reason to come and hear the music. Always first and foremost for me is to choose a good combination of musical experiences.

DH: There’s been a bit of a stir about how much of Michael Ward-Bergeman’s Barbeich Golijov used in composing Sidereus. Did you know the original work?

DM: Not until I read about the controversy. It’s obvious that he’s using a substantial amount of Ward-Bergeman’s material. I think his mistake was not to admit that up front, because he’s certainly used other music and borrowed other influences before. We’re really hung up on originality, and I can imagine the 36 orchestras that commissioned Sidereus were thinking they were getting something completely brand-new. When the reality reared its head, it was kind of a shock to everybody.

But at the end of the day, I think it’s a fascinating piece of music. I’m really intrigued by the way the strings can emulate the kind of vibrations that are made by the bandoneon, and I love the warm, chorale-like chords he can get out of the winds and the brass. I love the idea of trying to create the effect of a starry night using the musical palette hat he does. It’s a shame that controversy has developed around the piece, but I think Golijov’s a bit to blame for that.

DH: The Bruckner Quintet movement has been arranged by Lucas Drew. What form does it take?

DM: Essentially he took the quintet version and judiciously added a couple of double bass parts. The upper strings are just as Bruckner wrote them. There are still two viola parts, which I love.

DH: Who chose the Vivaldi double cello concerto? Yourself, or Linda Atherton and Derek Snyder, the soloists?

DM: I did and they loved the idea. One of the thrusts of the Orchestra is to be of Cleveland and for Cleveland, and it’s nice to feature artists who make their homes and their livelihood in the city. An exciting aspect of the Orchestra is that virtually anyone on that stage could stand up and play a solo in a very compelling fashion.

DH: The final item on the program — not a re-worked piece — is Schubert’s fifth symphony, a compact, little gem.

DM: Schubert is one of my desert island composers. How did these amazing symphonies spring out of nowhere with virtually no opportunity to have them performed — or maybe just a single performance at a friend’s house on a Thursday night? And yet we have this treasure trove of pieces that are certainly influenced by and show a love for Mozart and Haydn, and maybe even Beethoven, but in which Schubert really developed his own symphonic voice. There is not a wasted note in the fifth symphony. it just has this sparkling quality to it.

DH: Are you continuing the late Carlton Wood’s practice of having no intermission?

DM: Yes, this will be a one-act concert. I’ll speak briefly between the pieces — sort of live program notes.

DH: How do you feel about intermissions in general?

DM: It depends on the repertoire. I actually took a break in the middle of the Verdi Requiem because I thought it warranted one, yet I wouldn’t do that with the Brahms Requiem — it’s just so beautifully laced together, and I think that the key relationships are so strong. With the Verdi, I think if you take a break after the Credo you can regroup, refresh, and you’re ready for the rest of the Mass. It’s dependent on the work and how I think the audience might perceive the journey.

DH: You seem to be enjoying your work with BlueWater.

DM: We seem to get along really well. I have an enormous respect for these musicians and we accomplish a lot in short order. It’s amazing what this orchestra can do in the number of rehearsals it has. It’s really gratifying to work with people who are so serious about what they do and come to the table so well-prepared.

END_OF_DOCUMENT_TOKEN_TO_BE_REPLACED

Rodgers & Hammerstein’s Cinderella was originally produced for television in 1957 — seven years after the animated Disney film was released — and starred Julie Andrews. According to the Rodgers & Hammerstein website, it was viewed by over 100 million people. END_OF_DOCUMENT_TOKEN_TO_BE_REPLACED

The story line has its origin in an 1855 play and an 1842 farce that Thornton Wilder mined for his 1938 play The Merchant of Yonkers. When that turned out to be a flop, in 1954 Wilder made the crucial decision to re-center the show around the character of the legendary marriage broker Dolly Gallagher Levi and renamed it The Matchmaker. END_OF_DOCUMENT_TOKEN_TO_BE_REPLACED

The Dodero Center for the Performing Arts at the Gilmore Academy in Gates Mills is one feature of an impressive campus. The auditorium is shallow, the stage is deep, and the ensemble played without a shell. Throughout the program, the sound, especially in instruments’ lower registers, tended to disappear. END_OF_DOCUMENT_TOKEN_TO_BE_REPLACED