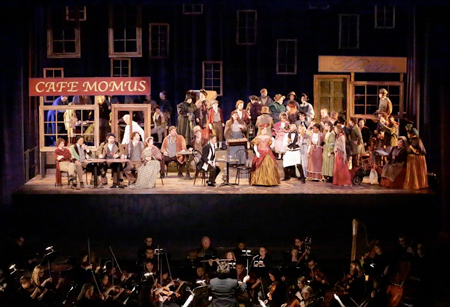 Puccini’s La bohème, probably one of the world’s most performed operas, packs a wallop pretty much every time you hear it. This weekend at Cleveland Opera Theater, that was again the case for me. But the emotional ending isn’t the whole of the opera. In its first three acts (and even in the opening of the fourth), La bohème often seems more comic than tragic, more boisterous than tender. Perhaps its mix of contraries, not just its sentiment, is what makes it so powerful.

The comedic quality begins with the four young “bohemians” in a Paris garret. Add a fetching young seamstress who lives just down the hall and conveniently loses her key, and a knowing tease of a girlfriend who openly mocks both her lover and her sugar daddy, and you have all the elements of a sitcom (is it Friends or Sex in the City?). A good production has to reconcile these antics with the tragedy of love and death.

Cleveland Opera Theater’s ambitious and appealing production of La bohème nicely captured the mixed tones of this rightly popular work, making the most of the opera’s complex interweaving of the silly and the weepy.

As Mimì, soprano Andrea Anelli played up the tender and innocent side of the heroine, longing for romance while dying of consumption. Her self-introduction to her future lover, “Mi chiamano Mimì,” was rendered beautifully and with touching sincerity, but it downplayed the edgier side of this knowing “bohemian” girl. As we learn later, Mimì’s friend Musetta is not the only character who plays love’s game and knows its devious strategies.

Tenor Tim Culver performed the poet Rodolfo with a warm, romantic affect and a moving vocal earnestness. As his roommate, the painter Marcello, Brian Keith Johnson was convincingly disconsolate (and occasionally indignant) at his lover Musetta’s shenanigans. Benjamin Czarnota was an engaging Schaunard — the musician of the group, who seems to be the only one who makes any money.

The fourth roommate is Colline, a philosopher. Jason Budd’s rendition of “Vecchia zimarra,” Colline’s stoic farewell to the old overcoat that he is pawning to buy medicine for Mimì, was chillingly intense. The double roles of Benoit, the landlord, and of Alcindoro, Musetta’s patron, were performed with comic zest by Jason Fuh.

Domenico Boyagian conducted the singers and the fine chamber orchestra with clarity and grace. However, the unfortunate decision to put the singers well behind the proscenium surrounded them with sound-sucking side-curtains. As a result, the voices were often muffled, while the orchestra, seated on the floor of the auditorium in front of the curtain, came through with vivid clarity. Intimate arias and duets too often lacked vocal presence, and complicated multi-vocal scenes — of which La bohème has many — were muddy. (And if you can’t hear the singers clearly, you also can’t pick out who is singing what in a crowd scene.)

Making the most of the wide stage at Cleveland Masonic Auditorium, director Scott Skiba and set designer Zachary Svoboda made the Parisian garret into a flexible space that supported love scenes as well as the roommates’ antics. Mood changes — essential for Puccini — were supported by effective changes in lighting (designed by Rob Wachala), especially in a moving evocation of sunset at the end of the opera.

The staging worked less well for the big crowd scene in Act Two, when the “bohemians” leave their garret for a café on the Left Bank. A chorus of shoppers, children, and a military band packed the stage with fun things to look at, but left little room for the action among the main characters. Another staging glitch unfortunately left Mimì hidden from half the audience in Act Three, when she should be visibly overhearing Rodolfo’s fears about her fatal illness.

Overall, however, this was a splendid production, musically and dramatically. A decent-sized audience with a considerable proportion of young people (bravo!) gave Friday evening’s performance a rousing and well-deserved ovation.

Published on ClevelandClassical.com May 2, 2016.

The music isn’t easy to play, either. Over the course of two hours, all of the musicians brought fantastic focus to the unrelenting tricky rhythms and countless layers of parts, all of which require a high level of individual responsibility. Even in the moments of calm, the accompaniment remains perpetually unsettled. Adams — who made a sprightly presence on the podium — combines minimalist, repeating motives in gradual layers, which eventually become so dense they overwhelm the senses. Lisa Wong deserves special mention for her thorough preparation of the Cleveland Orchestra Chorus, as does Jennifer Rozsa for the Children’s Chorus, which made a brief but memorable appearance in the last few minutes. END_OF_DOCUMENT_TOKEN_TO_BE_REPLACED

Warner was a fitting choice not just symbolically, but also sonically. The combination of Baroque strings, theorbo, harpsichord, and organ created a nice blend and balance, allowing the opportunity for softer instruments to stand out. In Johann Rosenmüller’s Sonata à 5 in g, Doug Balliett’s violone pizzicatos resonated beautifully, and in Johann Heinrich Schmelzer’s Sonata in d, harpsichordist Elliot Figg became an equal player in the texture with his clever improvisations. The slight exception was Joshua Stauffer on theorbo — despite the instrument’s big physical presence on stage, he received little time in the spotlight. END_OF_DOCUMENT_TOKEN_TO_BE_REPLACED