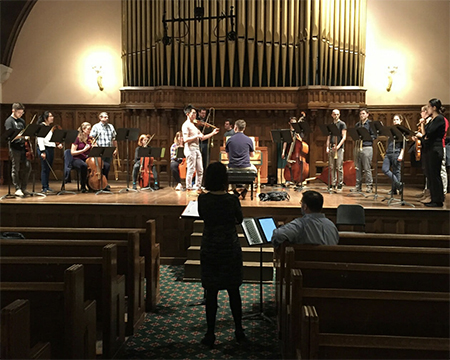 If you grew up before the late 20th-century early music enlightenment took hold, you might have thought from the available recordings that Venetian congregations visiting the Basilica of San Marco regularly heard music by the Gabrielis and their colleagues played by big, loud brass ensembles. Not so.

That impression was beautifully quashed on Saturday afternoon, February 17 in Harkness Chapel, when Julie Andrijeski’s CWRU Baroque Chamber Orchestra and Chamber Ensembles teamed up with multiple trombone students of Greg Ingles from Boston University in an hour-long survey of 17th-century Italian music for trombones and strings.

How does that even work? Primarily because these trombones are sackbuts, looking for all the world like normal trombones, but with smaller bells and tone qualities that allow them to blend wonderfully with voices, as well as support treble instruments like recorders, violins, and cornetti.

No cornetti on Saturday, but in eleven canzonas, sonatas, and motets — by Francesco Cavalli, Giovanni Picchi, Giovanni Battista Grillo, Christoph Strauß, Giovanni Priuli, Thomas Selle, Giaches de Wert, and Antonio Bertali — the Case and B.U. students achieved beautiful tapestries of tone in varying combinations of instruments. They ended with Giovanni Gabrieli’s spectacular 22-part Sonata venti, a surround-sound piece that deployed five choirs of instruments around the Harkness Chapel stage and into the audience. 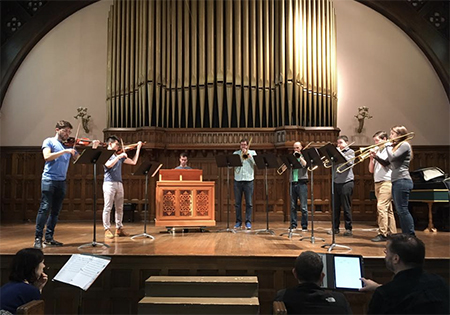 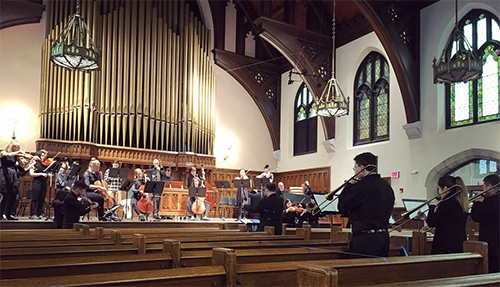 Gabrieli’s grand finale brought 24 musicians into play in an amazing variety of combinations and timbres (rehearsal photo above). It was a stunning conclusion to an ambitious musical collaboration of which Andrijeski, Ingles, and their students should be quite proud.