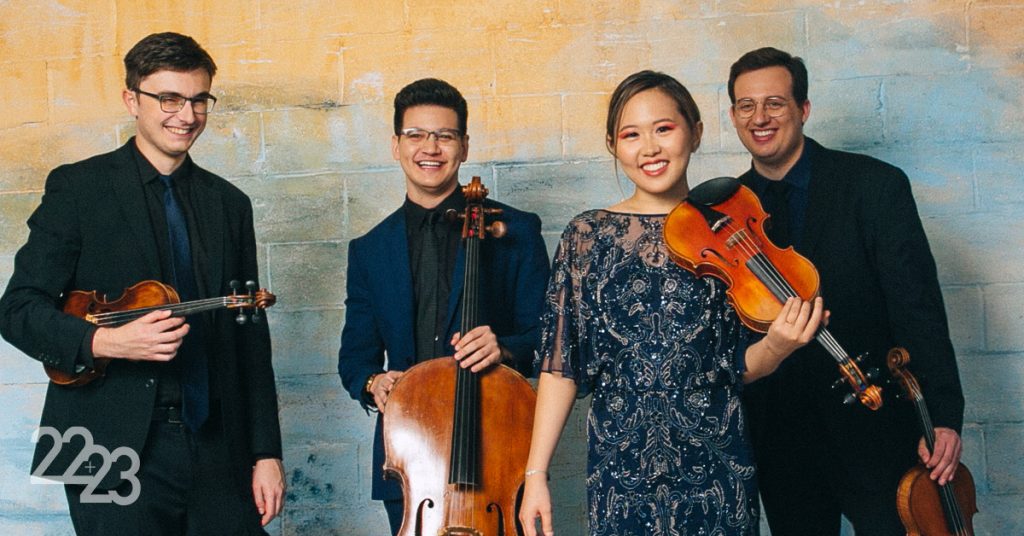 The Rocky River Chamber Music Society opened its 64th season on Monday, September 26 at West Shore Unitarian Universalist Church with a performance that symbolized part of what the organization is all about.

RRCMS regularly ferrets out ensembles that have only recently arrived on the world stage and presents them free of charge. The Balourdet String Quartet, which hangs its shingle in Boston at the New England Conservatory, is such a group, having been formed at Rice University in 2018 and quickly built a following and an impressive list of engagements.

Well-earned, because they’re terrific. Named after Antoine Balourdet, the celebrated head chef at the Hotel St. Bernard in Taos, New Mexico near the Taos School of Music, the Balourdet offer up well-curated, delectable musical menus that are apparently analogous to the chef’s wizardry in the kitchen.

On September 26, violinists Angela Bae and Justin DeFilippis, violist Benjamin Zannoni, and cellist Russell Houston played works by Debussy, Nina C. Young, and Brahms on a program you could attend in person or watch on a YouTube stream. I chose to do the latter to see what improvements a small organization had been able to make in broadcast quality since the last webcast. Happily, those were many and welcome. The sound was warm, clear, and perfectly synchronized with the video.

The Balourdet put all of its cards on the table at the beginning of the evening with the Debussy Quartet, playing with warm precision, making dramatic dynamic contrasts, and reinforcing crescendos with subtle increases in tempo. Ensemble members got out of the way of the multiple mini-solos that were beautifully integrated into the fabric of the first movement, and generally played with a single mind.

With its rapid shifts between pizzicato and bowed passages, the second movement was clean and transparent, and all musical decisions were unanimous and sensible. The expressive third movement sang out lovely modal phrases, and the finale sounded appropriately valedictory.

For something completely different and perhaps not plausibly relatable to cuisine, the Balourdet programmed Nina C. Young’s Memento Mori (2013), “a meditation on life and the perception of time” with a theme drawn from Bach’s Contrapunctus 1 of The Art of Fugue subjected to various compositional manipulations.

The seven-and-a-half minute piece, with its exasperatingly persistent alternations of two pitches, is difficult to listen to. That’s as it should be: the Latin title, often painted on sundials, means “remember that you will die.” Take a look at the score here.

As an emotional antidote, the Balourdet finished with engagingly-played Brahms — the second quartet, with its curious but thrilling Hungarian finale. The perfect Nachspeise.

The concert video is still available here (skip the 16 minutes before the Debussy!)