There were just two pieces on the program, both for solo instruments, but you could say there were three performances. That’s because, as has become a welcome tradition in No Exit’s virtual outings, director Tim Beyer turned his introductory remarks into a comic monologue. “I’ve got some exciting news for you,” he said, utterly straight-faced. “Everything in the world is just great. There’s nothing to worry about. Things are going according to plan.”

The music began with Bartók’s 1926 Piano Sonata, and the spirit of each movement was captured convincingly in the hands of No Exit’s own Nicholas Underhill. The opening “Allegro moderato,” with its strange cast of characters engaged in a hectic and dissonant dance, was vivid, and it ended with a thrill thanks to the pianist’s dramatic speed and emphatic punctuation mark.

The “Sostenuto e pesante” not only showcased a gentler range of his articulation, but also the atmospheric cinematography of Jane Underhill, who pulled back to the corner of the room with her shot, matching the cold, poignantly disengaged mood of the music. And though a few speed bumps arrived during thorny technical passages, the “Allegro molto” was fittingly wild and manic. It’s too bad the audio quality was a bit on the brittle side for this first half of the concert. 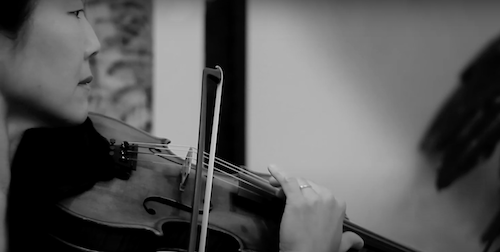 The program concluded with Adam Roberts’ 2008 Sinews. Navigating the intriguing musical language — a combination of sighing glissandos, intense crunches, and ghostly wafts of sound — guest violinist Mari Sato was a visceral and engaging storyteller. Her wide range of expression extended to the ending, where her light articulations were like drops of rain when you’re not yet sure it’s raining.

Stylized cinematography, this time the work of No Exit associate director James Praznik, again enhanced the experience. With Bartók it was through pulling back, with Roberts through coming close — in one instance, the camera followed along as Sato reached for her mute from a nearby table. It felt symbolic: even in that moment when she wasn’t playing, she practically held the audience in the palm of her hand.

END_OF_DOCUMENT_TOKEN_TO_BE_REPLACED

The strings-only work by Berg has made relatively frequent appearances on the Orchestra’s programs. In 2021, the musicians recorded it for the In Focus series, and it appeared again on last year’s European tour. Friday’s rendition maintained the group’s characteristic light and effortless playing, each section blending as much as possible to echo the work’s original form as a string quartet. At fifteen minutes total, the piece is quite short, but the dense encoded musical meanings require some extra-attentive listening. Splitting up the three movements ensured that each one could be appreciated on its own. END_OF_DOCUMENT_TOKEN_TO_BE_REPLACED