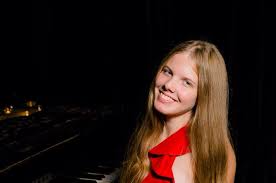 With music director Gerhardt Zimmermann in the pulpit, as it were, the Canton Symphony Orchestra took us to church with the first of the three works on its season-opening October 12 program. Written by the acclaimed contemporary American composer Jennifer Higdon in 1999, blue cathedral is a tone poem inspired by the searing loss of her younger brother, Andrew “Blue” Higdon, to cancer.

Higdon has explained that she thought of cathedrals as symbolic portals, leading from our world into spiritual realms beyond. Resonant throughout the work is the suggestion of a contemplative walk down cathedral aisles, a slow rising past pillars and glittering stained glass windows, through an immense ceiling to a vast blue sky, only momentarily clouded with sorrow tinged with anger, and finally to a peaceful state of transcendent celebration.

Special attention is given in the music to the flute, which Higdon learned to play when she was 15, and the clarinet, her brother’s instrument. Here, both soloists — flutist Jenny Robinson and clarinetist Ethan Usoskin — delivered achingly poignant dialogues amidst soft, shimmering chords from the strings, with the flute eventually fading out as the clarinet progressed alone into ecstatic quietness. Additionally, elegant percussive effects brought a haunting dimensionality. A variety of crystalline chimes and ringing bells augmented the sensation of being in a sacred place, including a passage wherein members of the string section gently rotated the small Chinese meditation balls they held in their hands, making a sound like distant wind. All told, the orchestra rose to this wholly mesmerizing work with a reverence so palpable, so moving, that I felt physically uplifted.

While blue cathedral is certainly an empyreal journey, the second selection on the program, Grieg’s Piano Concerto — with its unforgettable opening of a three-octave plunge down the keyboard — is a more earthbound experience, though no less compelling in its fervent soulfulness. Strangely, I’ve encountered some critical assessments of this work over the years which too quickly labeled it a tired warhorse. I’m sure that the guest soloist, Eva Gevorgyan, would heartily disagree.

There was nothing hackneyed about how this 16-year-old rising star performed the concerto — not only with impeccable technical prowess and clarity, but electrifying emotional intelligence as well. An especially arresting element was how Gevorgyan’s entire performance was infused with a quirky yet somehow endearing theatricality, adopting the animated mien of an entranced ballet dancer. In those passages when she wasn’t playing, she often gazed dreamily upward, listening intently to the ensemble, arms slowly swaying, hands poised in midair, seeming to gently grasp and sculpt the music itself.

Gevorgyan’s cadenza was a breathtaking display of youthful, sinewy vigor, beautifully complemented by the delicate, nuanced wistfulness of her playing in the elegiac Adagio movement. Her powerful rendering of the majestic finale brought the audience immediately to their feet amidst giddy howls of approval. The encore, Alexander Scriabin’s Poem, Op. 32, No. 1, was an all-too-brief moment of elegant, introspective lyricism.

After intermission, the orchestra’s performance of Brahms’ Symphony No. 2 in D was in every sense a brilliant exposition of the work’s almost dizzying array of moods, textures, colors, and rhythms. Still, even after the sonorous magnificence of the jubilant finale, what remains most bright in my appreciation of this extraordinary evening is Gevorgyan’s riveting ride on Grieg’s “warhorse.”

END_OF_DOCUMENT_TOKEN_TO_BE_REPLACED

Rodgers & Hammerstein’s Cinderella was originally produced for television in 1957 — seven years after the animated Disney film was released — and starred Julie Andrews. According to the Rodgers & Hammerstein website, it was viewed by over 100 million people. END_OF_DOCUMENT_TOKEN_TO_BE_REPLACED

The story line has its origin in an 1855 play and an 1842 farce that Thornton Wilder mined for his 1938 play The Merchant of Yonkers. When that turned out to be a flop, in 1954 Wilder made the crucial decision to re-center the show around the character of the legendary marriage broker Dolly Gallagher Levi and renamed it The Matchmaker. END_OF_DOCUMENT_TOKEN_TO_BE_REPLACED

The Dodero Center for the Performing Arts at the Gilmore Academy in Gates Mills is one feature of an impressive campus. The auditorium is shallow, the stage is deep, and the ensemble played without a shell. Throughout the program, the sound, especially in instruments’ lower registers, tended to disappear. END_OF_DOCUMENT_TOKEN_TO_BE_REPLACED