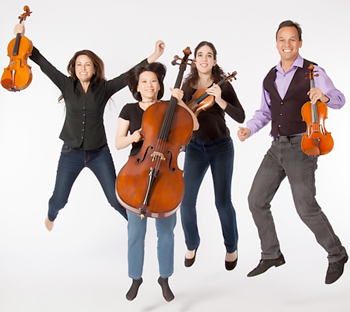 Founded in 2005 in Columbus, Ohio, the Carpe Diem String Quartet is a shining example of a 21st-century chamber ensemble. Known for its eclectic programming, diverse outreach activities, and forward-thinking definition of “classical” music, Carpe Diem is true to its name, seizing every opportunity no matter what obstacles stand in the way.

On Monday, March 20 at 7:30 pm at West Shore Unitarian Universalist Church, Carpe Diem String Quartet will return to Cleveland for a performance on the Rocky River Chamber Music Society series. The program will include music by Schubert, Taneyev, and the quartet’s own Korine Fujiwara.

Although Columbus is the Quartet’s home, its members reside in various locations across the United States. During a recent conference call, violinist Charles (Chas) Wetherbee phoned in from Boulder, Colorado, violist Korine Fujiwara called from Takoma, Washington, and violinist Amy Galluzzo and cellist Carol Ou joined the conversation from Boston. “We’re already on both coasts, so if I could just move to Miami then we’d have everything covered,” Galluzzo joked. “But it would be easier to rehearse if we were all in the same geographic location.”

Monday’s program will open with Schubert’s Quartettsatz, which Wetherbee described as a lovely piece that continues to leave people wondering why Schubert never finished it. “It also balances so well with the Taneyev because it mixes Romanticism with Classical contrapuntal styles.”

Carpe Diem has recorded all nine string quartets of Sergei Taneyev, and Fujiwara said she particularly loves No. 9. “I’m happy we’re playing it in Cleveland. It pays homage to his teacher Tchaikovsky, and we jokingly call it ‘the Nutcracker quartet’ because there are so many parts that remind us of the ballet.”

The evening will conclude with Fujiwara’s own Fiddle Suite “Montana.” The violist/composer said the work is a tonal story about her home state. “It’s a snapshot of different places and times. It’s written in an approachable Americana fiddling style, with jigs and reels. There’s also a bit of a bluesy jazz flavor, but for the most part it has a fiddle feel.”

Fujiwara, who is a founding member of Carpe Diem, explained that when the Quartet was formed, they set up a 501(c)(3) organization in Columbus. “The city is still very important to us. The corporation is located there, as is our Board,” she said. “We have a concert series and we do a lot of community engagement activities. It’s just a strange fact that the four players don’t have an address with a Columbus zip code, but our activities there remain quite busy.”

Wetherbee said that when the group was founded, he and Fujiwara were both members of the Columbus Symphony. “At that point everyone was from Columbus, and we were playing a lot of chamber music together,” he said. “So we thought that instead of just playing in a few festivals each year, we should consider playing more quartet music. As the Quartet got busier, it no longer fit into the two former members’ lives.”

Cellist Carol Ou said her audition for the group was a trial-by-fire experience. “I’ve auditioned for other ensembles, and it’s pretty standard to read some repertoire and see if it’s a friendly meeting,” Ou said. “But these guys called and said, ‘Hey, come play a Persian festival with us. We’ve been awarded a grant — we’re putting on a weekend musical feast with Persian musicians and rug makers, and we’re going to play microtonal music by Reza Vali.’ So I went, and over the weekend we read some Haydn and Beethoven, but the festival schedule was pretty rigorous. So there I was in Columbus, meeting a lot of very nice people and playing music I had never played, along with presenting microtonal music to school children. It was a lot of fun, and I got to meet a santoor player.”

Amy Galluzzo said that one year later, when auditions were held for a second violinist, her experience was similar to that of Ou’s. “I will never forget the phone conversation I had with Carol. I was walking into a subway station when she called and asked if I would come to Carnegie-Mellon University for one week to play works by the composition students,” Galluzzo recalled. “Then she told me we would also play a concert of works by Reza Vali. I said, ‘Sure,’ then she said, ‘Are you really sure?’ I said yes, and I guess you could say that the rest is history. But the funny thing is that we both met playing music by Reza Vali, and we have gone on to play a lot of it over the years. We won a Chamber Music America commissioning grant to have him compose more music for us. And we included that in our Carnegie Hall debut concert back on January 14.”

This May, Carpe Diem will present a new performance work created by Charles Wetherbee and Native American musician and storyteller Leon Littlebird titled Anthem of the Ancestors. The multimedia piece will tell a story about the first people’s history as seen through the lens of Mr. Littlebird.

“Inspiration comes from four directions,” Wetherbee said. “When Carol joined she was talking a lot about Tan Dun, and at another festival we included his Ghost Opera. We all throw different ideas in the pot.”

END_OF_DOCUMENT_TOKEN_TO_BE_REPLACED

Rodgers & Hammerstein’s Cinderella was originally produced for television in 1957 — seven years after the animated Disney film was released — and starred Julie Andrews. According to the Rodgers & Hammerstein website, it was viewed by over 100 million people. END_OF_DOCUMENT_TOKEN_TO_BE_REPLACED

The story line has its origin in an 1855 play and an 1842 farce that Thornton Wilder mined for his 1938 play The Merchant of Yonkers. When that turned out to be a flop, in 1954 Wilder made the crucial decision to re-center the show around the character of the legendary marriage broker Dolly Gallagher Levi and renamed it The Matchmaker. END_OF_DOCUMENT_TOKEN_TO_BE_REPLACED

The Dodero Center for the Performing Arts at the Gilmore Academy in Gates Mills is one feature of an impressive campus. The auditorium is shallow, the stage is deep, and the ensemble played without a shell. Throughout the program, the sound, especially in instruments’ lower registers, tended to disappear. END_OF_DOCUMENT_TOKEN_TO_BE_REPLACED