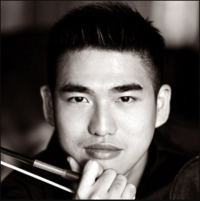 The second change in two years has transformed one of Cleveland’s most prominent chamber music ensembles. Si-Yan Darren Li will be the new cellist for the Cavani Quartet, joining Annie Fullard and Mari Soto, violins, and Eric Wong, viola. Li will replace Merry Peckham, one of the group’s founding members.

The addition of Li marks a new era for the Cavani. Formed in 1984, the ensemble was one of the first all-female string quartets. Until last year, when Eric Wong replaced longtime violist Kirsten Docter, the group had undergone only two personnel changes in its history.

The Cleveland Institute of Music’s Quartet-in-Residence since 1988, the Cavani are committed to sharing their passion for chamber music with all ages and walks of life.

Li hopes to add to that commitment. In a press release, the musician said that “teaching and playing chamber music are my passions” and he is excited to join the Cavani and CIM.

Li began his career at age nine as a student at the Beijing Conservatory. When he was a teenager, he moved to the United States to continue his studies with Orlando Cole in Philadelphia. A graduate of Juilliard and Peabody, he was previously a member of the Euclid Quartet, in residence at Indiana University, South Bend.

“With Si-Yan, it sounds like they’ve been playing together for years,” said Peter Salaff, director of chamber music at the Cleveland Institute of Music and former second violinist of the Cleveland Quartet. “I am deeply moved by their beautiful playing and remarkable artistry.”

The piece embellishes an Irish folk tale from County Mayo as told by Samuel Lover and collected by William Butler Yeats. Predictably fantastical, the story centers around a beautiful woman whose fiancé, a king’s son, is murdered and thrown into a lake. The grieving bride eventually disappears (the work of fairies?) about the time villagers notice a strange white trout in the water. END_OF_DOCUMENT_TOKEN_TO_BE_REPLACED

Not such a bad thing, as it turns out. “Building Bridges Together,” which debuted as a video production on November 21, combined the strengths of two fine Cleveland performing arts organizations in a beautifully edited virtual event — bringing them into the same performing space for the first time through digital means. END_OF_DOCUMENT_TOKEN_TO_BE_REPLACED