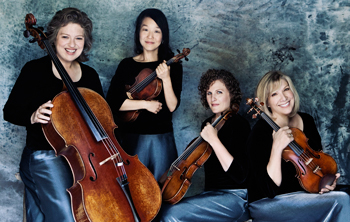 Celebrating your thirtieth anniversary is a big moment — especially if you’re a string quartet. Formed three decades ago in Columbus, Ohio, the Cavani Quartet is also celebrating its twenty-sixth year as Quartet-in-Residence at the Cleveland Institute of Music. What began in 1988 as a one-year residency with the support of a grant from Chamber Music America has turned into a long-term relationship. During that quarter-century, the Cavani have established themselves as one of the most successful community residencies in the country.

On Wednesday, March 4 at 8:00 pm in CIM’s Kulas Recital Hall, the Cavani Quartet, Annie Fullard and Mari Sato, violins, Kirsten Docter, viola and Merry Peckham, cello, will celebrate thirty years as a quartet in a free concert, when they will be joined by guest artists Donald Weilerstein, viola and Vivian Hornik Weilerstein, piano. The program includes Shostakovich’s Quartet No. 9 in E-flat, op. 117 and Piano Quintet in g, op. 57 as well as Mendelssohn’s String Quintet No. 2 in B-flat, op. 87.

What is the reason for the Quartet’s longevity? “I think it’s the mission that we started with,” said cellist Merry Peckham. “We can all understand its importance. There are many ways that we can make a difference as teachers of great music, and as diplomats who carry the torch for the tradition. Maybe it’s also the feeling that we are connecting with the world in a unique and powerful way. Also, I really love these guys. Our husbands and kids all hang out together when we’re away, and when we’re in town we all hang out together. I’m pretty sure this is not true for a lot of quartets who have been together more than 20 years. We enjoy laughing together, eating together, and the music is amazing.”

The Quartet’s formative process happened quickly. After meeting at Indiana University, founding members violist Annie Fullard and cellist Merry Peckham relocated to Columbus, where they came together with violinist Susan Waterbury and violist Erika Eckert at The Ohio State University in January of 1984.

After rehearsing for one week, they played for Andrew Jennings, then Concord Quartet violinist, who encouraged them to apply to the Center for Advanced Quartet Studies at Aspen. They got in. 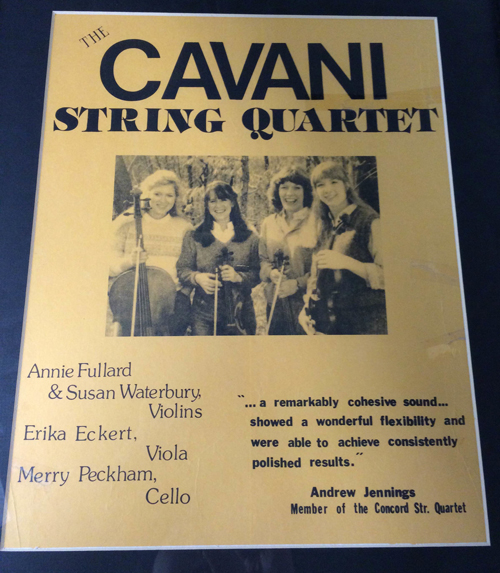 While at Aspen they met the Cleveland Quartet, (Donald Weilerstein, Peter Salaff, Atar Arad and Paul Katz) and through a series of events were offered full scholarships plus a stipend to continue their studies with the Cleveland Quartet at the Eastman School of Music. Fullard described the Eastman experience as an “absolute immersion.” The four young musicians received four to five hours of coaching each day.

They were also sent on their first residency. As Fullard recalled it, “One day we were called into to see Dr. Freeman, the director of the Eastman School. He told us that we needed to learn how to do residencies and that he was sending us to Hilton Head.” Although the group had performed many school concerts, this would be a totally new experience for them — going into a community and engaging it for an extended period of time. “We did have a lot of help and received some very good advice,” Fullard said. “Although it certainly was a sink-or-swim situation, that was when we first thought, we’re kind of good at this.”

Based on this experience the Cavani applied for and received a Residency Partnership Grant from Chamber Music America. Through the encouragement of mentors they approached David Cerone at the Cleveland Institute of Music, asking him if CIM would be willing to be the partnering organization. The activities would include an intensive quartet seminar and an amateur chamber music workshop, as well as concerts throughout the community and in the schools. Cerone agreed, and the residency took place in 1988. During that year the Cavani also sealed their professional credentials by winning the 1989 Naumburg Chamber Music Competition. 26 years later the Cavani Quartet remain CIM’s Quartet-in-Residence. 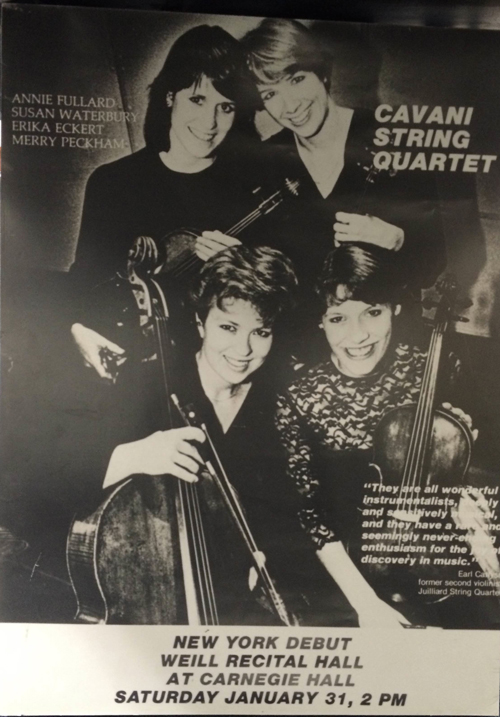 In addition to their touring and teaching, during those 26 years the Cavani have performed for an estimated 100,000 k-12 students in Northeast Ohio; performed for and worked with students at every school in the Cleveland Heights/University Heights Public School district; performed concerts for community arts organizations throughout greater Cleveland, including ongoing programs at the Cleveland Clinic and University Hospitals; and organized and directed amateur chamber music workshops which were attended by more than 320 adults.

Through the Intensive Quartet Seminar and Apprentice Quartet program, they collaborate with the Cleveland Chamber Music Society by taking CIM student ensembles into local elementary schools throughout the city of Cleveland, East Cleveland and Lakewood.

Continuing their commitment to making live music accessible to audiences of all ages, they recently began a series of public lecture demonstrations hosted by Rabbi Roger Klein at Temple-Tifereth Israel, where they address the topics of compositional techniques, career development and social and historical context.

During their Beethoven & Brotherhood project, the Cavani performed the complete Beethoven Quartet cycle in public libraries throughout the city of Cleveland. They also collaborated with a local biomedical technology firm during IngenuityFest.

They have also participated in COLLAGE, an interdisciplinary and multicultural arts event in collaboration with Kent State University Professor of Pan-African Studies and poet Mwatabu Okantah. The program has been performed at high schools and universities around the area.

Even over a 30-year span, that’s a lot of activity. “We are constantly stimulated by the possibilities of new projects,” said Annie Fullard. “There are always new students and we get ideas from them. Being an artist means that you are constantly in the creative process. It’s never boring, and there’s a constant resupplying of energy. So it’s not like, oh, 30 years, because every year can be more exciting than the last.”

The current Cavani personnel have been together for 20 years (violist Kirsten Docter joined in 1993 and violinist Mari Sato in 1995.) That, too, is something to celebrate. In the next article we visit the four musicians in their CIM studio.

END_OF_DOCUMENT_TOKEN_TO_BE_REPLACED

Supported by engagingly, yet simple staging by Cara Consilvio, a well-prepared cast of singers told the archetypal story of Cinderella with charm and flair. Framing the production was  a sparse but colorful set and wonderful lighting by Dave Brooks. END_OF_DOCUMENT_TOKEN_TO_BE_REPLACED