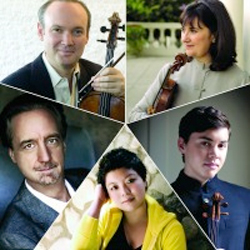 The last Cleveland performance by the Chamber Music Society of Lincoln Center in 2010 brought two pianists and two percussionists to town for music by Shostakovich, Crumb and Bartók and shifted the Cleveland Chamber Music Society’s center of gravity westward to Waetjen Auditorium at CSU. On Tuesday evening, the Societies colluded once again, but this time the agenda was all strings and the venue was Plymouth Church in Shaker Heights.

That dramatic contrast in “orchestration” reflects the breadth of what CMS is able to program at Alice Tully Hall and other Lincoln Center venues in New York. A collective that dates from the original concept for that performing arts center, CMS is always to some extent a pick-up group of fine musicians who form ensembles for specific projects — like this tour of a program entitled “Folk Inspirations,” which launched last week with a performance in New York.

Thus one’s ears go into a concert like Tuesday’s with a different set of expectations than for an established ensemble that lives, breathes and plays together regularly and has established communal ideas of tone, timbre and phrasing down to the smallest details — like the use of vibrato. Violinists Benjamin Beilman and Ana Kavafian, violists Paul Neubauer and Yura Lee and cellist David Finckel — making his second appearance on the Cleveland series this season — are mighty fine players who perform with style and flair, but a highly polished ensemble sense is necessarily just a bit out of their reach.

Beilman, Kavafian and Neubauer opened the program on a thrilling level with a visceral reading of Zoltan Kodály’s Serenade, op. 12, a folk-inspired piece redolent with humor and drama. Neubauer’s was the predominant and resonant voice in this three-way conversation, in which two instruments seemed to be ganging up on the third in a series of shifting allegiances. When playing together, Beilman and Kavafian contributed highly articulate, rhythmically-charged comments to the discussion while connecting with expressive glances. The trio stood to play, adding visual interest to the performance.

More standard fare filled out the program. Johannes Brahms’s Quintet in G, op. 111 and Antonin Dvořák’s Quintet in E-flat, op. 97 featured different violinists in the driver’s seat — Beilman for the Brahms, Kavafian for the Dvořák.

Beilman, a current member of CMS Two (the junior division of CMS, of which Yura Lee was a former member), led expertly in the Brahms, playing with abundant vibrato and occasional lapses in intonation. Balances were odd: you’d expect a bit more heft in the tenor register from a two-viola quintet. Laying down an unfailingly steady bass line, David Finckel’s attention was concentrated everywhere at once — he’s undoubtedly the Paterfamilias of the Lincoln Center program.

The Dvořák proved to be more engaging, musically. A product of the composer’s sojourn in Spillville, Iowa during the summer of 1893, opus 97 is awash in interesting harmonic features (the major-minor gestures toward the end of the first movement), energetic forms (the second movement Czech “hoedown”) and varied textures (the third movement begins with a cello line above the two viola parts). The fourth movement found Dvořák up to his usual expert tricks in crafting a finale that would bring the audience to its feet.

It worked, and the CMS quintet gave the nice-sized audience a little Polka by Johann Strauss, Sr. as a parting gift.

Jackson began the program with a recitation of Langston Hughes’ poem “Helen Keller” — the first of five poems by Hughes that served as interludes between each piece on the first half. END_OF_DOCUMENT_TOKEN_TO_BE_REPLACED

Pianos with pins and tape on strings, a bass drum and tam tam, crotales, Almglocken, and vibes. Microphones were hooked up all around the instruments. The feed was sent to speakers around the room. Lighting designer Nicholas Houfek hung incandescent globes over the arrangement of instruments from thin black wires stretching across the beams. END_OF_DOCUMENT_TOKEN_TO_BE_REPLACED

From the podium, Elim Chan set an ambitious tone for the evening. The rising star conductor, here in her Cleveland Orchestra debut, has a commanding style, and every twist and turn in Saturday’s performance tracked closely with her baton. END_OF_DOCUMENT_TOKEN_TO_BE_REPLACED