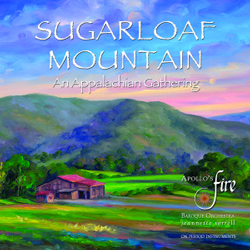 The new CD preserves last summer’s countryside concerts (“Glory on the Mountain”) under a new title. Once again, Jeannette Sorrell has gathered a splendid crew of singers and instrumentalists, including vocalists Amanda Powell and Ross Hauck, violinist (a.k.a. fiddler) Susanna Perry Gilmore, wooden-flute player Kathie Stewart, lutenist, guitarist, long-neck dulcimer player and vocalist Brian Kay, cellist René Schiffer, and hammered dulcimer player Tina Bergmann. While nobody would mistake this sophisticated, super-educated ensemble for a folk group, they wear their erudition lightly and take up their folksy material with infectious enthusiasm.

There’s a narrative that runs through the playlist — a prologue about the mountains of the old country, then crossing to the new world, settling in the dark mountains, partying at corn shucking time, loving and losing, faith and religion, and a grand finale, “Sugarloaf Mountain,” a retexting by Sorrell of the Scottish song, “The Mountains of Rhúm,” that opens the disc.

Highlights are numerous, but Powell’s version of the Child Ballad “The Cruel Sister” is winningly sinister (and will remind you of Tom Lehrer’s “An Irish Ballad”). The nonsense song “Nottamun Town” is fun and rhythmic with its toe and foot tapping. Powell’s “The fox went out on a chilly night” makes effective use of Appalachian diction and low humor (bone-sucking at the end), and Hauck’s unaccompanied singing of “Just before the battle, Mother” is haunting.

Stylistically, the harpsichord doesn’t quite fit the tone of the rest of the album in a medley beginning with “I wonder as I wander,” and things turn jazzy-gospely in “O Mary, don’t you weep,” but Sugarloaf Mountain is a keeper both for fans of Apollo’s Fire and of Celtic and folk music in general. The CD, produced by Jeannette Sorrell and Erica Brenner and recorded by Thomas Knab, has a lively, intimate sound. It’s almost as good as being there.

END_OF_DOCUMENT_TOKEN_TO_BE_REPLACED

Then, you heard all the qualities that make for a stunning soloist. Winner of the 2013 Cleveland International Piano Competition, Khristenko was back in town this month for a recital in Piano Cleveland’s summer series, Piano Days @CLE. And he couldn’t help but revel in the spotlight a little, even as he settled into a more collaborative role at the keyboard for his program, “Stanislav and Friends.” END_OF_DOCUMENT_TOKEN_TO_BE_REPLACED