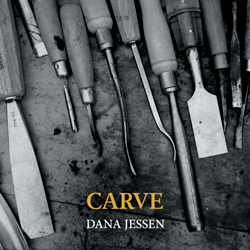 On her debut album Carve, bassoonist Dana Jessen challenges listeners to discard any preconceived notions they may have about the instrument, and allow themselves to be swept away into a magical world of colorful acoustic and electronic soundscapes. Released on Innova Recordings, Carve features four alluring commissioned works by American composers — Paula Matthusen, Sam Pluta, Peter V. Swendsen, and Kyle Bruckmann — interwoven with playful improvisations by Jessen.

Inspired by improvisations created during a collaborative residency with Jessen at the Centro Mexicano para la Música y las Artes Sonaras (CMMAS), Matthusen’s haunting of an implacable subtraction (2015) makes the perfect opener to the album. Jessen’s rich, dark sound blends beautifully with the mystical quality of the electronics.

Points Against Fields, tombeau de Bernard Parmegiani (2014), a work co-composed by Pluta and Jessen, is an imaginative work — and given that no narrative is stated, just let your mind run wild. Beginning with low thumping in the bassoon surrounded by a flurry of electronic insects, the work’s inventive use of multiphonics and extended techniques make it an album highlight.

For his intoxicating Fireflies in Winter (2015), Swendsen incorporates field recordings representing a range of seasons in Seattle, Oberlin, Prague, and Bodø, Norway, creating a rich tapestry of sounds. Jessen plays beautiful semi-improvised melodic cells throughout. The sounds of a train, perhaps traveling through a Norwegian snowfall, are particularly engaging, as are the concluding multiphonics in the bassoon’s high register that slowly fade into the distance, leaving only the sounds of rain or snow tapping on a window.

Bruckmann’s Cadenza and Degradations (2015) sounds apocalyptic — in a good way. Scored for bassoon and fixed electronic tracks along with Bruckmann’s own recorded improvisations on the oboe and bass oboe, the piece is defined by an angry buzzing of reeds, while a booming bass drum adds extra bang.

Dana Jessen’s short improvisations add a nice combination of spices to the recording. Carve (without reed) features rhythmic breathing and a little bit of beat boxing, while Carve (with teeth) is full of artsy buzzing. Carve (only reed) imitates the chirping of baby chicks perfectly, and Carve (postlude), beginning in the high register, melodically brings the album to a fine conclusion.

Produced by Dana Jessen, the album was recorded at Oberlin Conservatory’s Clonick Hall. The audio engineers were Paul Eachus and Andrew Tripp. The project was supported with funds from New Music U.S.A.

Co-founder of the Bay Area reed quintet, Splinter Reeds, Dana Jessen has performed with prominent ensembles including the San Francisco Contemporary Music Players, Ensemble Dal Niente, Calefax Reed Quintet, Callithumpian Consort, Anthony Braxton’s Tri-Centric Orchestra and the Amsterdam Contemporary Ensemble, among others. As the founder of the Rushes Ensemble, Dana spearheaded the consortium commission of Rushes, an hour-long composition for seven bassoons by composer and Bang on a Can co-founder, Michael Gordon.

Franz Welser-Möst led the final bows on Saturday night at Severance, like the star of any show should. The Cleveland Orchestra’s music director is in his element presiding over the ensemble’s annual opera production, which this season packs the drama. Verdi’s Otello — in a concert staging that opened May 21 and runs for two more performances (May 26 and 29) — demands big voices, instrumental forces to match, and a conductor who can give it all shape and direction. END_OF_DOCUMENT_TOKEN_TO_BE_REPLACED

The cimbalom was the feature of the show, an instrument capable of taking on many personas. Its performer, Chester Englander, has shaped his career around the instrument, and has inspired composers to write more repertoire for it, some of which was presented on the program. END_OF_DOCUMENT_TOKEN_TO_BE_REPLACED

You wouldn’t expect that acoustic from a glance at the nave, which is wide and long, but not especially lofty. But when I guest conducted a local amateur choir and professional orchestra in Beethoven’s Mass in C there a few years back, during the first rehearsal we released the final chord of the “Gloria” and listened in astonishment for the next several seconds. The sound continued to roll down the space like the big wave that surfers dream about. END_OF_DOCUMENT_TOKEN_TO_BE_REPLACED