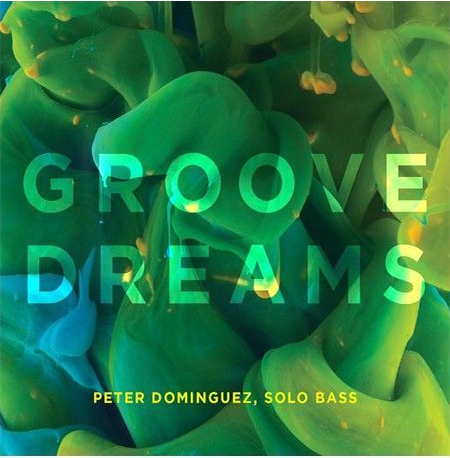 Nearing the end of this summer, which included the third edition of the Milt Hinton Bass Institute at Oberlin, we look back a year earlier to a solo album with important connections both to the Conservatory and to the legendary Hinton himself. Groove Dreams, released on the Oberlin Music label in May of 2017, spotlights a special performer and a special instrument: Oberlin professor Peter Dominguez and the 18th-century Italian bass which Hinton played throughout his career. That bass, among several other Hinton treasures, came to the Conservatory thanks in part to personal ties between Dominguez and the late “Dean of Jazz Bassists,” who died in 2000 at the age of 90.

Honoring a leader who has “walked on,” the album opens with the Tsimshian traditional Mourning Song for a Chief — concise and powerful. As Dominguez writes in the liner notes, “The drum is represented by the E-string stomp.” And what a stomp it is, an insistent beating of the string that looms over the melody. The bassist seems to test his strength midway through, making the stomp practically threatening with its force.

Listening to Chick Corea’s Crystal Silence over headphones makes you wish you were sharing it with others, hearing it played live. The performance from Dominguez, genuine and devoted, is the kind that seems to strike a chord within those who hear it, creating some unspoken bond. A different kind of intimacy comes across in Nat Adderley’s Bossa Nova Nemo (The Jive Samba), which Dominguez plays so naturally that you feel you’re just hanging out on a patio, hearing him jam.

Two other highlights come by way of the bassist’s own pen. The title track combines tunes by Sonny & Cher (The Beat Goes On), Thelonious Monk (Monk’s Dream), and John Sebastian (I Had a Dream), all making a smooth transition to the bass. But the best part here is the stop-start hesitation of the lick that links all the borrowed material. With Spanglin’, Dominguez taps you on the shoulder and says, listen. Playing with extra pop in his step, he makes the work stick out from its neighbors — Tadd Dameron’s You’re a Joy and Stevie Wonder’s Lately, which wander thoughtfully if a little too long.

Bill Evans’s Orbit (Unless It’s You) closes like a big, intriguing question mark that sets up the nuance of the final track, Tom McIntosh’s With Malice Toward None. The title is from the closing words of Abraham Lincoln’s Second Inaugural Address, delivered in March of 1865, when the unimaginable violence of the Civil War was nearing an end.

Mixed emotions come through in Dominguez’s subtle glissandos, moments of murky resonance, and jaw-dropping expression. But the bassist seems to save a special touch for two notes you otherwise might not notice. He gives the string a loud buzz: perhaps a hint of malice.