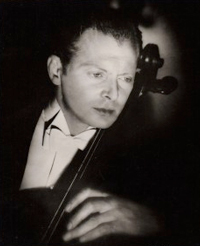 Bruch and Bloch form the musical bookends of this attractive album. The Bruch is a familiar item to which Thornton brings a warm, intense tone, beautifully supported by Spencer Myer’s lyrical piano lines. The two go on to condense a whole Dvořák opera into fifteen and a half colorful minutes in the Rusalka fantasie that follows and set a lovely, brisk but supple tempo for the Rachmaninoff that makes an old warhorse sound fresh. The four Aronson arrangements are charmingly varied, ranging from a Klezmer-infused dance to a song from the Jewish play, Dybbuk, Jewish ritual music, and a song about the Sea of Galilee reduced down from Marc Lavry’s original setting for soprano and orchestra. The CD ends with Bloch’s soulful Prayer, played with deep intensity by Thornton and Myer. 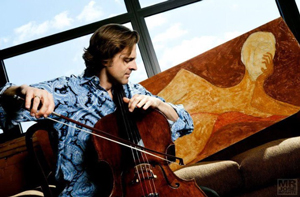 But just before Prayer comes perhaps the most fascinating piece on the album: Zimmerli’s Sonata. The New York-based composer notes that he “writes a sophisticated yet approachable hybrid of jazz and classical music,” and here the subject is the Hebrew prayer Kol Nidrei, which Zimmerli took pains to analyze both as a confessional prayer and in its various settings in classical music. During the course of the sonata, the tune is never far from the surface, even when deconstructed and tossed about over pizzicatos in the third movement. Immediately attractive, Zimmerli’s Sonata is not only the central piece on this album but also a major contribution to the literature for unaccompanied cello. Thornton puts it across masterfully.

In addition to the splendid performers out in front, the album has a winning team behind it: Five/Four Productions’ Thomas Moore and Michael Bishop were recording producer and editor and recording and mastering engineer for the sessions, which were held in Reinberger Chamber Music Hall at Severance Hall. You feel like you’re sitting in the third row. The beautiful insert, designed by Jose Infante, features original art by Giancarlo Calicchia. On May 29, the disc will be available for download from CD Baby and iTunes.

Published on ClevelandClassical.com May 29, 2013

For its latest In Focus episode, “Visions and Impressions,” The Cleveland Orchestra makes a gesture in the direction of welcoming winds back into the action, although principal flute Joshua Smith’s contribution to the event comes in the form of two unaccompanied pieces that leave him looking very lonely on the Severance Hall stage. END_OF_DOCUMENT_TOKEN_TO_BE_REPLACED

LD’s artistic director Debra Nagy introduces the hour-long program with a discourse on the importance of the garden and its centerpiece, the fountain, for artists and musicians of the 14th century. Later in the program, Blue Heron artistic director Scott Metcalfe expands on the subject by exploring the Trinitarian metaphor behind that bubbling source of water in the Medieval mind. END_OF_DOCUMENT_TOKEN_TO_BE_REPLACED

END_OF_DOCUMENT_TOKEN_TO_BE_REPLACED

The latest program, which visits the ghetto and palace at Mantua and the ghetto and church at Venice, uses expressive instrumental music by Salamone Rossi, Giuseppe Sammartini, Antonio Vivaldi, and Alessandro Marcello, two of Benedetto Marcello’s 50 psalm settings, and Hebrew prayers and songs associated with Passover and Purim to evoke the rich cultural life of those towns. END_OF_DOCUMENT_TOKEN_TO_BE_REPLACED