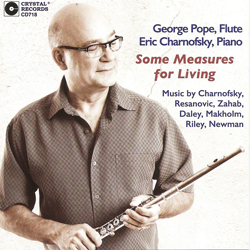 Flutist George Pope, who played principal with the Akron Symphony from 1978-2002 while teaching at the University of Akron, has released a CD on the Crystal Records label featuring seven works he either commissioned, or were written for or first performed by him. In the liner notes, he reveals the musical preferences that informed his choice of repertoire: “beautiful melodies and colors, intricate passagework, energetic rhythms, and a strong current of jazz and popular music.”

That perfectly describes this engaging album and its collection of relatively short works by Nikola Resanovic (faculty at the University of Akron), Carl Riley (an artistic polymath trained in Paris, the U.S., and Brazil), Ron Newman (faculty at Michigan State University), Nancy Daley (an Akron organist), Eric Charnofsky (faculty at Case Western Reserve University and Pope’s collaborative pianist on the disk), Roger Zahab (violinist, and conductor at the University of Pittsburgh), and Joseph Makholm (jazz pianist and trombonist based in Paris).

The pieces take their inspiration from various sources: jazz (Newman’s Improvisation, Somewhat Reasonable, and Makholm’s Sonata for Flute and Piano); Greek mythology (Riley’s Moerae, The Fates); and nature (Nancy Daley’s In Cynthia’s Garden — where you’ll find hostas, strawberries, and a willow tree). Two works — Resanovic’s Sonata for Flute and Piano and Charnofsky’s Four Characters — deal with more intellectual musical matters. And one — the album’s title piece, Zahab’s …some measures for living — was written for an emotionally ambiguous memorial event.

The jazz-inspired works are well-suited for the flute, and Pope and Charnofsky glide through them with an easy, swinging virtuosity. Riley’s three “Fates” are symbolic portraits suggested by the composer’s reflections on life, love, and loss — which, as he writes, “provided me a channel for celebration, remembrance, and grieving.” The performers penetrate to the core of those feelings. Daley’s little triptych resembles Edward MacDowell’s Woodland Sketches in its directness and simplicity, and receives appropriately understated treatment.

The Resanovic and Charnofsky works are the most substantial works on the album, exploring such musical issues as the contrast between lyrical and atonal themes, polymetric rhythms over blues progressions, extended flute techniques, pitches derived from Messiaen’s modes of transposition, and the use of canon and octatonic scales.

Zahab took up Pope’s challenge to write a work for an AIDS memorial that would be both “lively” and “appropriate to the occasion.” True to its commission, …some measures for living begins solemnly but ends with a life-affirming rondo.

Throughout this interesting selection of pieces, George Pope plays his Altus flute with a lively tone that sounds wonderful in all registers. Eric Charnofsky is a superb partner at the piano, undaunted by the most complicated keyboard writing — including his own.

This is a disc that will be inspiring for flutists both for its concept and execution, though its 73 minutes of sophisticated but accessible music should prove enjoyable for everyone. Its textures and styles are so varied that the ears never grow weary.

Northeast Ohio’s Les Délices has long been that rarest of beasts: a world-class organization so proud of its region (ours) and repertoire (distinct niches in pre-1800 music) that it never tries to be everything to everyone, paradoxically making a strong case for a broad, curious international following. In the December episode of its SalonEra series, the ensemble embraces its strengths and community to marvelous effect. END_OF_DOCUMENT_TOKEN_TO_BE_REPLACED

END_OF_DOCUMENT_TOKEN_TO_BE_REPLACED

Another I remember fondly is Gian Carlo Menotti’s Amahl and the Night Visitors.  Commissioned by NBC, the one act, made-for-television opera, premiered on December 24, 1951, at the network’s studios in New York’s Rockefeller Center. And now, through the wonders of technology, Cleveland Opera Theater has created a magical new production of the work which is available on demand through January 6, 2021 (Three Kings Day). END_OF_DOCUMENT_TOKEN_TO_BE_REPLACED

Jessen has now followed up with her second solo CD, Winter Chapel. Recorded on January 17, 2020 in Oberlin College’s Fairchild Chapel and available on Carrier Records, the album is a continuum in Jessen’s journey to push the musical boundaries of her instrument and herself as an improviser. END_OF_DOCUMENT_TOKEN_TO_BE_REPLACED