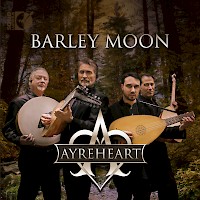 Far from being an outdated or even obsolete instrument, the lute makes a stirring pitch for its continued relevance in the hands of the ensemble Ayreheart, which released Barley Moon in June 2016 on the Sono Luminus label. In this album, four modern day troubadours with lutes and drum and sweet, sweet voices harken for an hour to a simpler musical era.

Comprising songs by John Dowland, William Byrd, and anonymous Renaissance composers, Barley Moon is also a testament to the expertise and knowledge of lutenists Ronn McFarlane, Willard Morris, and Brian Kay (who is equally expert on the komuz, a Central-Asian cousin to the European lute); percussionist Mattias Rucht; and Ray Nurse, not a member of Ayreheart but a world-renowned lutenist himself, who arranged these tunes of yore.

From the stolid opening strains of “John Barleycorn” to the ever so slightly exotic jangling of “Nottamun Town,” Ayreheart drives the music at a light, dancing pace, constantly stepping just ahead of expectations to delight and entertain. Kay, also a regular performer with the Cleveland-based Baroque ensemble Apollo’s Fire, handles the vocal duties with intoxicating relish. Just a hint of an accent infuses his lyrics with a nostalgia that elevates Barley Moon above your typical album of Renaissance songs. There’s a sincerity to his storytelling that draws the ear and holds it willingly captive. “John Barleycorn,” “Henry Martyn,” and “Twa Corbies” are particularly compelling.

Perhaps the only flaw in Barley Moon is its flawlessness. The care that went into recording this music is apparent, and while the result is a sincere interpretation of 16th-century troubadour-style music, some of Ayreheart’s live performances (viewable on YouTube) are more enjoyable simply for their raucous, not-quite-perfectly-polished charm.

Barley Moon is a wonderful feat of research, skill, and taste, a wonderful addition to any music lover’s collection. In the near future, I’ll be looking into Ronn McFarlane’s other albums, the Grammy-nominated Indigo Road (2009) and One Morning (2010), which also feature Willard Morris and Mattias Rucht. Barley Moon is available for purchase on iTunes, Amazon, and from other retailers.

END_OF_DOCUMENT_TOKEN_TO_BE_REPLACED

Franz Welser-Möst led the final bows on Saturday night at Severance, like the star of any show should. The Cleveland Orchestra’s music director is in his element presiding over the ensemble’s annual opera production, which this season packs the drama. Verdi’s Otello — in a concert staging that opened May 21 and runs for two more performances (May 26 and 29) — demands big voices, instrumental forces to match, and a conductor who can give it all shape and direction. END_OF_DOCUMENT_TOKEN_TO_BE_REPLACED

The cimbalom was the feature of the show, an instrument capable of taking on many personas. Its performer, Chester Englander, has shaped his career around the instrument, and has inspired composers to write more repertoire for it, some of which was presented on the program. END_OF_DOCUMENT_TOKEN_TO_BE_REPLACED