He has written, “I strived to create music to counterpoint the terrible pandemic and honor the dead — to try to give some measure of solace to families by sharing a personal expression of grief.”

Impressed by the emotional directness and honesty of the piece, harpist Yolanda Kondonassis easily persuaded Kernis to arrange the piece for harp and trumpet so she could perform and record it with her husband, Cleveland Orchestra principal trumpet Michael Sachs. The two musicians, who rarely perform together, recorded it on the Severance Hall stage earlier this year for The Cleveland Orchestra’s In Focus Episode 12, “Celestial Serenades,” where it can still be viewed on the Adella platform.

On September 17, Azica Records released a single of Kondonassis and Sachs performing the seven-minute piece in Sauder Concert Hall at Goshen College, superbly recorded and mastered last May by Alan Bise. 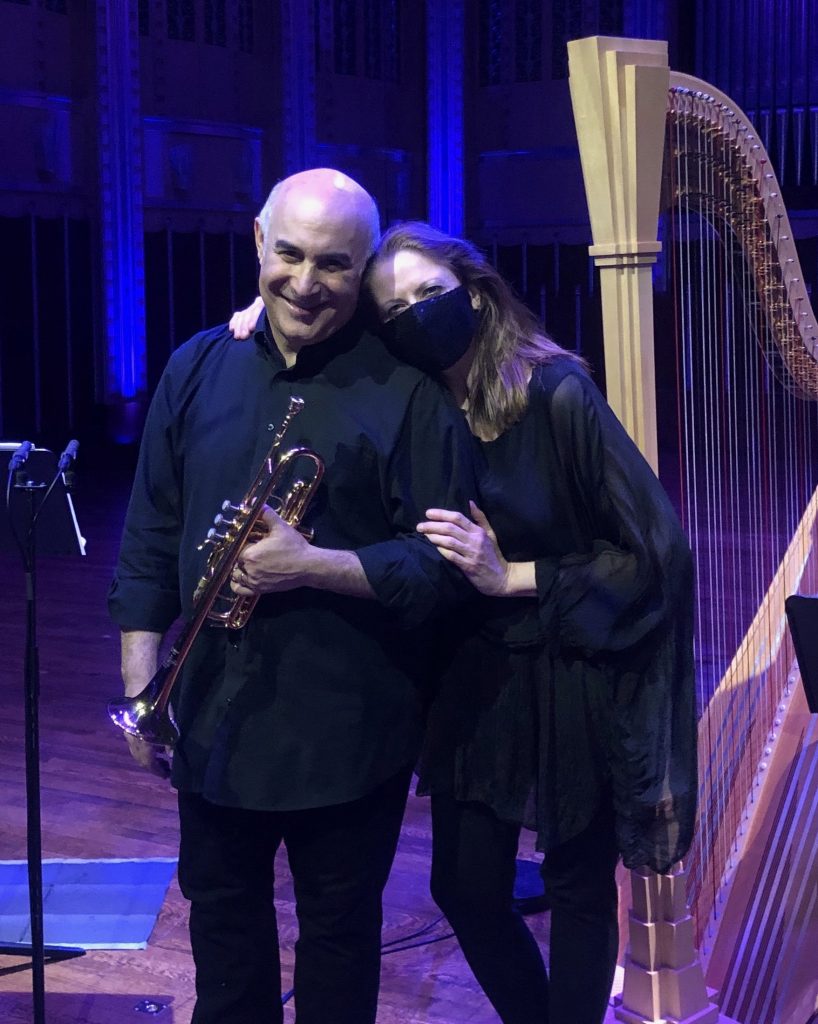 The Elegy is a moving testament to those who have not survived to hear it. In the shape of its melody and its spiritual content, the piece subconsciously bears a resemblance to Elgar’s Nimrod, but if that’s in fact intentional, it’s only by way of tribute.

Moving from the meditative to the quasi-triumphant on a stream of conflicting emotions, the piece ends as quietly as it began. Although their instruments are radically different in character, the two musicians combine their individual sounds beautifully, Sachs achieving a lyrical blend of gold and silver hues and Kondonassis producing strong, weighted tones that stand up bravely to the trumpet.

Kondonassis noted in a Q&A that the work has a “wonderful architecture of emotional states. Aaron achieves that rare but perfect musical arc that takes the listener on a journey through the stages of grief — deep sadness, resignation, despair, and rage, ultimately leading towards hope, sublimation, resolve, acceptance, and finally peace. That’s quite a feat in a seven-minute work, but Aaron manages it with seamless grace.”

That feat is reproduced just as seamlessly by Yolanda Kondonassis and Michael Sachs in their performance of the Kernis Elegy on this digital single.

END_OF_DOCUMENT_TOKEN_TO_BE_REPLACED

Rodgers & Hammerstein’s Cinderella was originally produced for television in 1957 — seven years after the animated Disney film was released — and starred Julie Andrews. According to the Rodgers & Hammerstein website, it was viewed by over 100 million people. END_OF_DOCUMENT_TOKEN_TO_BE_REPLACED

The story line has its origin in an 1855 play and an 1842 farce that Thornton Wilder mined for his 1938 play The Merchant of Yonkers. When that turned out to be a flop, in 1954 Wilder made the crucial decision to re-center the show around the character of the legendary marriage broker Dolly Gallagher Levi and renamed it The Matchmaker. END_OF_DOCUMENT_TOKEN_TO_BE_REPLACED

The Dodero Center for the Performing Arts at the Gilmore Academy in Gates Mills is one feature of an impressive campus. The auditorium is shallow, the stage is deep, and the ensemble played without a shell. Throughout the program, the sound, especially in instruments’ lower registers, tended to disappear. END_OF_DOCUMENT_TOKEN_TO_BE_REPLACED