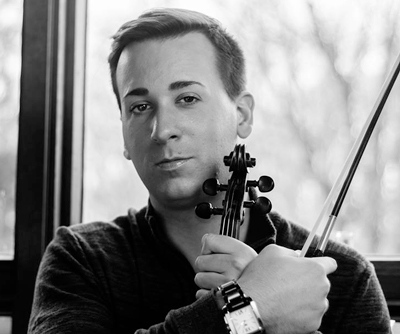 When we telephoned violinist Andrew Sords to chat about his recital on the Chagrin Concert Series next Sunday, he had just returned to Cleveland for thirty-six hours. “When I was nineteen,” he said, “I thought it would be great if I could play ten or so concerts a year.” A decade later, Sords sometimes finds himself playing that many performances in a month.

Since the first of October, his itinerary has taken him to four towns in Ontario, to Buffalo in New York, to Johnstown in Pennsylvania, to Woodbridge in Virginia, and finally to Ohio for concerts in Norwalk and Chagrin Falls. He loves his busy musical life. “I feel so fortunate that I get to go out and say something with a box of wood with four aluminum strings stretched over it.”

“Saying something” to his audiences is important to Sords. He likes to immerse himself so long and deep in the language of a certain composer or musical culture that he completely understands what needs to be put across. “There’s no worse feeling than being twenty years old and on the road, and not feeling that you’re fluent in a composer’s language. It’s like adjusting to a different climate. I don’t want to say that once you’ve played the Tchaikovsky concerto 50 times you have the last word to say about it, but you’re certainly more adept at communicating a composer’s language when you’ve lived with it for a long time.”

Most recently, Sords has dipped deeply into Mendelssohn. “I perform in Canada two or three weeks out of the year, and this time the presenter gave me carte blanche to do whatever I wanted to do. I invited my cellist pal Sawyer Thomson from Cleveland, and Cheryl Duvall, my pianist in Toronto, to do the little-known Mendelssohn F Major Sonata in the Menuhin version, and the two d minor Piano Trios.” Sords also recently performed the Sonata in Virginia and in Ashtabula, and played the composer’s violin concerto with the Johnstown Symphony in Pennsylvania.

“What I learned from the Mendelssohn immersion was how simple, how elegant, and how understated the music could be while still delivering a knockout punch,” he said. “Maybe it’s the fact that Mendelssohn has so much internal combustive energy that is just seething under the surface. That made me think of the first page of the concerto entirely differently than I had before. Not that it’s a lackadaisical beginning — it’s not — but as the string section comes in with those eighth notes it feels like a Ferrari gunning to go. At a quiet dynamic, of course.”

For his Ohio concerts, Andrew Sords has decided to take a plunge into French music. On Sunday, November 1 at 3:00 pm in Valley Lutheran Church in Chagrin Falls, he’ll join pianist Eriko Izumida in sonatas by César Franck, Gabriel Fauré, and Maurice Ravel’s Tzigane. The concert is part of the Chagrin Concert Series.

“The Franck sonata has paid my bills for the last decade,” Sords said. “As soon as I first performed it in a run of concerts a decade ago with Anita Pontremoli I felt I could say so much with that piece in thirty minutes. It was a selfish — or maybe self-gratifying — decision to perform it for a number of years because it has everything. It’s opening is full of religious serenity, and its humongous climaxes make me feel four pounds lighter after every performance.

“Since Fauré’s output for the violin is much smaller than other composers, his language is still a little different for me. I know that his teacher, Saint-Saëns, was very enthusiastic about him. Fauré formed a bridge from the 1870s to the 20th century, and he was still writing music 50 years later.”

Sords says that Ravel’s Tzigane almost needs no introduction, but he mused about what the pianist must be thinking during the long solo violin cadenza that begins the piece. “I need to be as clever and as well-paced as I can because I need to hold the attention of my closest audience, the pianist. If I can keep my collaborator focused, then I’m doing something right.”

Sords went on to say that the Tzigane was a very important piece in his musical education. “When I was a student at the Cleveland Institute of Music, I was working with Linda Cerone. I always wanted to be playing this enormous repertoire — Olympian concertos like the Sibelius and the Brahms. In her infinite wisdom, Mrs. C. would give me a certain piece right before I would tackle one of those big concertos. When I said I really wanted to do the Sibelius, she said I really had to do the Stravinsky concerto and the Ravel Tzigane first. Of course, she was right. Many performers think that the Ravel is an encore piece, but I think it’s a tremendous piece of concert music.”

After his local French programs, Sords will fly to San Miguel, Mexico for an early November recital, return to Cleveland to play the Beethoven concerto with the LCCC Civic Orchestra in Elyria on November 14, and perform the Brahms double concerto with the Parma Symphony on December 6. He’ll spend January and February concertizing in Florida and California. “I’ve gotten smarter and try to get out of town during the winter months”, he said. He’ll return to Cleveland in early March to play the relatively obscure Bruch second concerto with Victor Liva and the Cleveland Philharmonic. “Linda Cerone said she had played the piece back in the Nixon administration. I proposed it to Victor and he agreed. I love it when conductors have some faith in their soloists. It’s a really effective work.”

Andrew Sords copes with his busy travel schedule by partitioning his life. “You have to find a balance. When I’m home, I’m completely immersed at home. Once I’m on the road, it’s all business.” But coming home to Cleveland proves to be just as satisfying as the thrills of the concert circuit. “Cleveland is so blessed with people like Elizabeth DeMio — who has played 200 concerts with me — and Anita Pontremoli, and The Cleveland Orchestra, and the graduates of CIM. We’re living in a musical oasis here. You could choose ten different events to go to in a week but you can’t make it to all of them.”

Northeast Ohio’s Les Délices has long been that rarest of beasts: a world-class organization so proud of its region (ours) and repertoire (distinct niches in pre-1800 music) that it never tries to be everything to everyone, paradoxically making a strong case for a broad, curious international following. In the December episode of its SalonEra series, the ensemble embraces its strengths and community to marvelous effect. END_OF_DOCUMENT_TOKEN_TO_BE_REPLACED

END_OF_DOCUMENT_TOKEN_TO_BE_REPLACED

Another I remember fondly is Gian Carlo Menotti’s Amahl and the Night Visitors.  Commissioned by NBC, the one act, made-for-television opera, premiered on December 24, 1951, at the network’s studios in New York’s Rockefeller Center. And now, through the wonders of technology, Cleveland Opera Theater has created a magical new production of the work which is available on demand through January 6, 2021 (Three Kings Day). END_OF_DOCUMENT_TOKEN_TO_BE_REPLACED

Jessen has now followed up with her second solo CD, Winter Chapel. Recorded on January 17, 2020 in Oberlin College’s Fairchild Chapel and available on Carrier Records, the album is a continuum in Jessen’s journey to push the musical boundaries of her instrument and herself as an improviser. END_OF_DOCUMENT_TOKEN_TO_BE_REPLACED