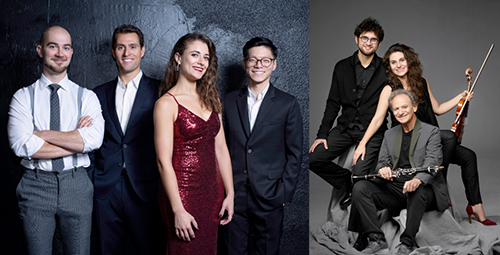 After some discussion, the two organizations decided to compare their respective mailing lists, and they were met with a surprising discovery — there was very little duplication. “It became apparent that having a collaborative event would be a great way for Cleveland-area chamber music lovers to be introduced to both organizations,” Somach said.

Somach and Franklin Cohen agreed that the logical artistic link between the two organizations was the Dover Quartet, whom the Chamber Music Society has presented on three occasions. And whose violist, Milena Pajaro-van de Stadt, was part of ChamberFest in 2019.

“I’m absolutely thrilled to be sharing the concert with the Dover Quartet,” Cohen said. “I’ve been a great admirer of them for some time.”

The clarinetist also looks forward to reuniting with Pajaro-van de Stadt. “I first met Milena at a music festival near Philadelphia,” he said. “Diana knew her and invited her to play some chamber music. We read through the Mozart and the Weber quintets and probably the Brahms too,” he recalled. “I thought she was the best thing since sliced bread.”

For Cohen, this concert is also about making music with his personal and musical family — something that is important to him. “My late wife Lynette was a musician, and both of our children became musicians. Then Diana married Roman, who is a musician. Milena is part of the ChamberFest family and now we have this concert with the Dover — I’m just a lucky guy.”

Cohen said he looks forward to hearing the Dover’s performance of the Ravel. “And to hear Diana and Roman play the Chausson with them is going to be a thrill,” he added. “And I’m playing the Mozart with one of my favorite violists on the planet.”

Cohen said that the piece holds a special place in his heart. He recalled that the first time he played the trio was with Rudolph Serkin and former Cleveland Orchestra principal viola Robert Vernon. “It was my first assignment during my first year at Marlboro. I was really nervous because I was still sort of a kid and so was Bob, but he was the famous director of the Festival. But when Serkin started to play, Bob and I looked at each other and thought, so that’s what it’s supposed to sound like.”

The German word Kegelstatt means ‘a place where skittles are played,’ and while there is evidence that Mozart played the game, there is nothing to suggest that the composer gave that nickname to the K. 498 trio. Still, it’s entertaining to contemplate what the connection might have meant.

“I remember being in the locker room at Severance practicing a couple passages from the piece,” Cohen said, “when a former member of the viola section came up to me and said, ‘Frank, do you know why they call it the Kegelstatt?’ I said sure, the story goes that Mozart was observing a game of skittles while he was sketching the piece. He said, ‘You know, there’s a much deeper history behind this.’”

The piece begins with a forte chord followed by a quick ornament and a slower descending motive. Cohen recalled what the violist told him: “If you think about it, Mozart was watching bowling, which at the time had nine pins,” the clarinetist said. “So there’s the crash of the ball — the forte chord — then the pins falling over, the first ones falling quickly and the last ones more slowly.”

Cohen found the story to be completely astounding. “Now it makes sense,” he said. “Mozart is watching the game and decides to make a little motif out of it and build on that. So now I feel like Mozart is watching us play the game.”

With this work, premiered in 1907, Sibelius offered a bold departure from the explosive emotionalism so prevalent in late-Romantic era music. This symphony was a renewed embrace of Classicism’s purity of form and melody, and one that, oddly enough, left many initial audiences of the day somewhat bewildered. END_OF_DOCUMENT_TOKEN_TO_BE_REPLACED

After eating a Po’boy from The Dawg Bowl Cajun food truck, I caught the first half of Brian Culbertson’s show in The Connor Palace Theatre. END_OF_DOCUMENT_TOKEN_TO_BE_REPLACED