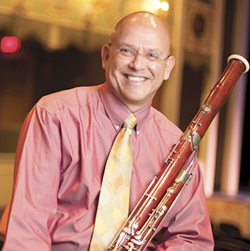 What attracted Traba to the work? “Each one of its twelve movements is quite different. They beautifully showcase the different instruments in the quintet. The piece has everything — there’s a wonderful, happy waltz for piano and clarinet that depicts Paris at the time that Rorem was living there and studying with Nadia Boulanger. He also based each movement on a different poem. For example the second movement is a huge cadenza for the bassoon, inspired by John Greenleaf Whittier’s Snow-Bound. The wonderful penultimate movement is for solo cello. During the finale, Rorem brings back thematic material from every movement and ties them together, bringing the piece to a very peaceful end.”

Composed in 1981 at the request of pianist Charles Wadsworth, Winter Pages was premiered on February 14, 1982 by the Chamber Music Society of Lincoln Center. “The piece was tailor-made for that ensemble,” Traba said. “At the time, Wadsworth was its artistic director, and he was a good friend of Rorem’s, so he asked him to write it. And interestingly, Rorem knew who would be playing the premiere.

In the liner notes of a New World recording of the piece, Rorem writes, “In October of 1980, my old friend Charles Wadsworth and I had lunch at O’Neill’s (Eggs Benedict, chocolate truffles, espresso) to discuss the length, choice of instruments, degree of difficulty, fee, and deadline for the piece I had long been wishing he’d invite me to write, tailor-made for his Chamber Music Society of Lincoln Center. Here, too, the color combination was unprecedented in catalogs of chamber music — and I knew the instrumentalists before I set pen to paper: Gervase de Peyer, clarinet; Loren Glickman, bassoon; James Buswell, violin; Leslie Parnas, cello; and Charles himself on piano.”

“I’m looking forward to playing it in that wonderful house,” said Traba. “It’s going to be a lot of fun.”

END_OF_DOCUMENT_TOKEN_TO_BE_REPLACED

Rodgers & Hammerstein’s Cinderella was originally produced for television in 1957 — seven years after the animated Disney film was released — and starred Julie Andrews. According to the Rodgers & Hammerstein website, it was viewed by over 100 million people. END_OF_DOCUMENT_TOKEN_TO_BE_REPLACED

The story line has its origin in an 1855 play and an 1842 farce that Thornton Wilder mined for his 1938 play The Merchant of Yonkers. When that turned out to be a flop, in 1954 Wilder made the crucial decision to re-center the show around the character of the legendary marriage broker Dolly Gallagher Levi and renamed it The Matchmaker. END_OF_DOCUMENT_TOKEN_TO_BE_REPLACED

The Dodero Center for the Performing Arts at the Gilmore Academy in Gates Mills is one feature of an impressive campus. The auditorium is shallow, the stage is deep, and the ensemble played without a shell. Throughout the program, the sound, especially in instruments’ lower registers, tended to disappear. END_OF_DOCUMENT_TOKEN_TO_BE_REPLACED