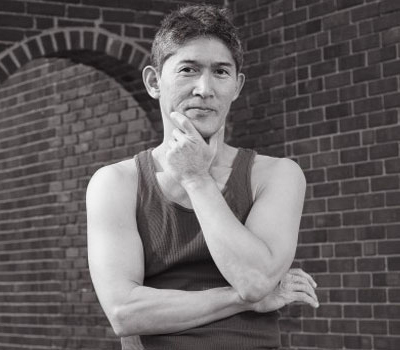 A recent phone conversation with David Shimotakahara, Executive Artistic Director of GroundWorks DanceTheater, was as much about his upcoming collaboration with ChamberFest Cleveland as it was about the process and source of creativity.

GroundWorks is about to kick off its 20th season with its second collaboration with ChamberFest in a June 30 concert at 7:30 pm at the Maltz Performing Arts Center. “Dawn of a Revolution” spans centuries of music from Beethoven to Alberto Ginastera, connected by the common thread of György Ligeti’s Musica Ricercata for solo piano, selections of which are distributed throughout.

“I don’t think I would call the dance itself ‘Dawn of a Revolution,’” Shimotakahara said with a laugh, “but it works from the music side, referring to these breakthroughs of ideas, these moments of musical revolution.” The concept was created by ChamberFest’s own Frank and Diana Cohen, who were interested in finding a way to showcase these different, significant pieces from the chamber music canon.

Shimotakahara is working with five dancers to choreograph this journey of creative breakthroughs, though not every piece will be danced. He didn’t want to create any “sense of predictability.” Dance will weave fluidly in and out, changing the frame of reference so that the next piece is sometimes attached to the previous one, at other times commenting on it.

“I love classical music because it’s an amalgamation of so many different influences, connected through time. That’s what I draw on,” he said. His own background stems from classical ballet: “It’s undeniable, it’s part of who I am and how I create.” GroundWorks prides itself on having many dancers from many different backgrounds, who hybridize and transform concepts of dance.

“It’s always a process of trial and error. We work very collaboratively so we always pass information from one body, one mind to another.” Shimotakahara emphasized how creativity is an “iterative process, where you experiment to find out what sticks — make mistakes, erase and reject, start and stop, reset and rehash and redo. That moment of creativity doesn’t just happen.”

To begin the process for this piece, the choreographer boiled this “nugget of an idea” down to “the moments behind creative invention, and where it comes from.” He was looking for “motivators for movement ideas,” or what the movement could be based in, and how things could be passed down through time or some other form of connection. He described the Ligeti as “the essence behind the beginning of something. The solo pianist represents the artist that is trying to figure out the next note.” This is reflected in Ligeti’s concept behind the piece, where he centered “No. 1” around a single tone, then “No. 2” around two tones, and so on.

“I would have gladly created a whole piece using just the Ligeti. I think it’s really interesting,” Shimotakahara admitted, “but it was a chamber music festival, so…” His favorite is “No. 7,” which has “this beautiful, restless current of energy, the energy of creativity. I loved how it fit the concept — the restlessness of spirit when you’re trying to create and things are in motion.” He also enjoys “No. 11,” which ends the concert. “It felt very timeless in a way, continuous, but sort of brooding and dark, something with its own continuum,” the choreographer said.

“There was only one piece I didn’t want to choreograph, the Shostakovich [the Allegretto from String Quartet No. 8 in c], because to me it is its own drama. There’s so much in it that I just wanted people to be able to live in the music in their own way. It didn’t feel like it needed another layer of visualization, so I left that one alone.” Shimotakahara had similar feelings, though not as strong, about the second movement of Ravel’s String Quartet. “It’s so seductive, but I went with it.” He had just finished choreographing a very beautiful duet to the middle section of that piece.

This concert deals with some pretty abstract concepts, so reactions may be varied. You may be inspired, may feel that spine of creativity in your own body. Or maybe not. “These composers were alone when they were creating, but very connected at the same time. Hopefully through our dance, that idea surfaces in some way,” Shimotakahara said, reminding us of the sometimes thankless life of an artist. GroundWorks pushes its own boundaries, but that effect isn’t necessarily observable. “We all create in different ways, and hope it connects at some level to other people’s experiences. That’s all you can wish for.”

The cimbalom was the feature of the show, an instrument capable of taking on many personas. Its performer, Chester Englander, has shaped his career around the instrument, and has inspired composers to write more repertoire for it, some of which was presented on the program. END_OF_DOCUMENT_TOKEN_TO_BE_REPLACED

You wouldn’t expect that acoustic from a glance at the nave, which is wide and long, but not especially lofty. But when I guest conducted a local amateur choir and professional orchestra in Beethoven’s Mass in C there a few years back, during the first rehearsal we released the final chord of the “Gloria” and listened in astonishment for the next several seconds. The sound continued to roll down the space like the big wave that surfers dream about. END_OF_DOCUMENT_TOKEN_TO_BE_REPLACED