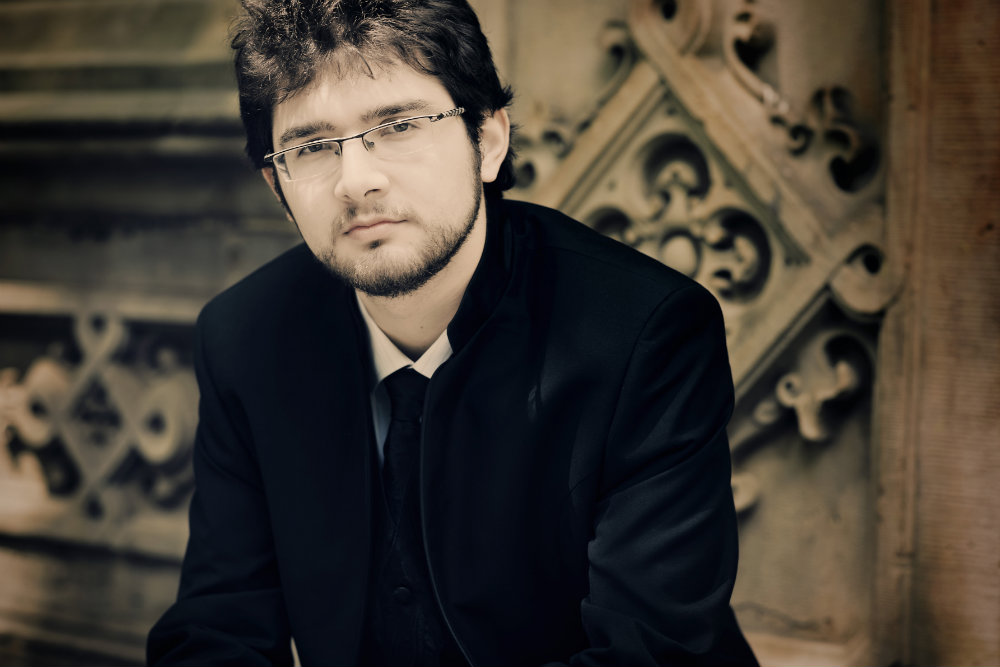 Although ChamberFest Cleveland dubbed its third concert “The Independent Spirit,” it might just as aptly have been titled “The Indefatigable Pianist” in honor of Roman Rabinovich. He spent the entire evening at the keyboard on Saturday, June 16 in Mixon Hall, flawlessly spinning out one elegantly articulated phrase after another.

The evening began with business — the outgoing and incoming board presidents were keen to move some ChamberFest merchandise at intermission, and presented an engaging infomercial hawking historic T-shirts. Then clarinetist Franklin Cohen and violist Yura Lee joined Rabinovich in a playful performance of Mozart’s K. 498 Trio. The piece either has something or nothing to do with the ninepin game of skittles (Kegels in German) that the composer was fond of playing, but the trio put this agreeable little piece of Hausmusik across with charm. Their unanimity in articulating the little four-note roulades in the opening theme was admirable. 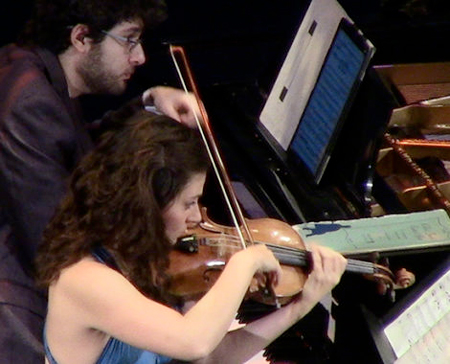 Next, violinist Diana Cohen and Rabinovich took the audience on a wild ride — not in that fast machine of another John Adams piece, but in the composer’s Road Moves. This one begins (“Relaxed Groove”) and ends (“40% swing”) with movements constructed from dizzying chains of repetitive rhythms that vary ever so slightly from time to time. The middle movement (“Meditative”) gives the performers a break at an oasis of long, lyrical lines before taking off again. Cohen quipped before playing the piece that it was going to be more fun for the audience than for the performers, but she and Rabinovich dispatched Adams’ treacherous rhythmic patterns with cool confidence. Sudden explosions of sound and a false ending added to the fun. In the super-energetic last movement, you had to wonder what “100% swing” might have sounded like.

Brahms’ Piano Trio No. 1 made its second appearance at the Festival on Saturday evening. Herbert and Rabinovich had played the work earlier in a ChamberFest cameo at the AHA! Festival at Cleveland State University with violinist David Bowlin, now off to other engagements and replaced by Alexi Kenney.

With two string players in their early 20s and a pianist in his early 30s, you might have expected a reading long on vitality but short on depth, but not so. This was a performance fresh with youthfulness but tempered by uncanny maturity. The trio played with extraordinary ensemble, produced a lean, sonorous sound, and left few details unexamined. The lengthy first movement ended with an exquisite denouement led by Kenney’s expressive playing. The Scherzo began with Mendelssohnian delicacy, then turned muscular. Herbert contributed a poignant cello solo in the Adagio, and the unflagging Rabinovich was still able to summon up his magical touch in the finale. Bravos resounded from the packed house even before the last note died away.

Speaking with the conductor by phone in Cleveland this past Wednesday, I began our conversation by telling him that I had a wonderful conversation with Stefan Jackiw, who was singing his praises (read the article here). Especially how sensitive the conductor’s ear is with regards to color, which Jackiw noted is quite important in the concerto’s passacaglia. END_OF_DOCUMENT_TOKEN_TO_BE_REPLACED

The music isn’t easy to play, either. Over the course of two hours, all of the musicians brought fantastic focus to the unrelenting tricky rhythms and countless layers of parts, all of which require a high level of individual responsibility. Even in the moments of calm, the accompaniment remains perpetually unsettled. Adams — who made a sprightly presence on the podium — combines minimalist, repeating motives in gradual layers, which eventually become so dense they overwhelm the senses. Lisa Wong deserves special mention for her thorough preparation of the Cleveland Orchestra Chorus, as does Jennifer Rozsa for the Children’s Chorus, which made a brief but memorable appearance in the last few minutes. END_OF_DOCUMENT_TOKEN_TO_BE_REPLACED

Warner was a fitting choice not just symbolically, but also sonically. The combination of Baroque strings, theorbo, harpsichord, and organ created a nice blend and balance, allowing the opportunity for softer instruments to stand out. In Johann Rosenmüller’s Sonata à 5 in g, Doug Balliett’s violone pizzicatos resonated beautifully, and in Johann Heinrich Schmelzer’s Sonata in d, harpsichordist Elliot Figg became an equal player in the texture with his clever improvisations. The slight exception was Joshua Stauffer on theorbo — despite the instrument’s big physical presence on stage, he received little time in the spotlight. END_OF_DOCUMENT_TOKEN_TO_BE_REPLACED