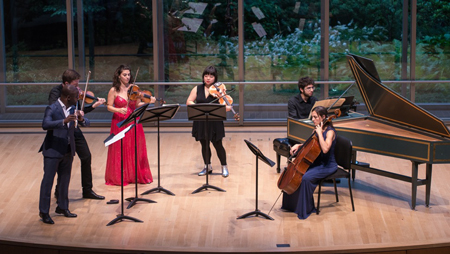 On June 23, as beautiful light poured through Mixon Hall’s many windows, ChamberFest Cleveland presented “Hommage,” a program showcasing composers paying tribute to J.S. Bach. The concert began with the final two movements of Bach’s Suite No. 2 in b, replacing the originally programmed Cantata BWV 209 due to the withdrawal of mezzo-soprano Lauren Eberwein. The Suite showcased flutist Demarre McGill, who played with brilliant technique and joy. Playing beautifully, violinist Alexi Kenney engaged in happy musical conversation with McGill, and cellist Julie Albers and harpsichordist Roman Rabinovich provided robust continuo lines. The ensemble, which included violinist Diana Cohen and violist Yura Lee, performed the repeated sections in a way that made them feel like new material.

After a lengthy stage change, pianists Zoltán Fejérvári and Rabinovich began the four selections from György Kurtág’s Játékok (“Games”). Three were clear hommages — one for J.S. Bach, one for Stravinsky, and one for Jószef Soproni. The duo performed with an array of colors, and their choreography of arm crossings was a feat to behold. 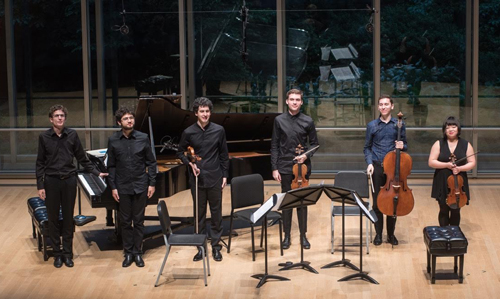 Kenney, Lee, violinist Itamar Zorman, and cellist Oliver Herbert were already onstage for Sofia Gubaidulina’s Reflections on the Theme B-A-C-H for String Quartet, which followed immediately after Játékok. Filled with glissandi, harmonics, and the use of the iconic theme in the most bizarre ways, the piece is mesmerizing. As Reflections ended, the two pianists returned, showcasing the truly special harmonies in Kurtág’s arrangement of Bach’s Sonatina from Actus Tragicus, Cantata No. 106, to end the first half.

The second half of the concert belonged to Tchaikovsky’s Trio in a, Op. 50. Composed in 1881-82, the lengthy, two-movement work is an hommage to the composer’s mentor, Nikolai Rubinstein, who had recently passed away. Cohen, Albers, and Rabinovich showed glimpses of amazing ensemble playing, even if some moments could have been tighter during this is taxing work.

END_OF_DOCUMENT_TOKEN_TO_BE_REPLACED

Supported by engagingly, yet simple staging by Cara Consilvio, a well-prepared cast of singers told the archetypal story of Cinderella with charm and flair. Framing the production was  a sparse but colorful set and wonderful lighting by Dave Brooks. END_OF_DOCUMENT_TOKEN_TO_BE_REPLACED