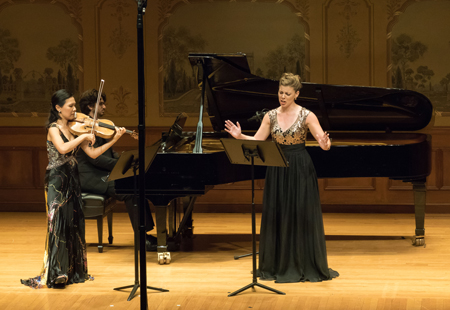 ChamberFest Cleveland’s concerts organize chamber works under imaginative themes. On Friday evening, June 17 in Reinberger Chamber Hall at Severance, the connective tissue that linked works by Bridge, Dvořák, Kurtág, Beethoven, and Brahms in a concert titled “To My Distant Beloved” was the idea of separation anxiety.

Up first was British composer Frank Bridge’s Three Songs for Voice, Viola, and Piano, written in 1906-07, and poignantly sung by mezzo-soprano Marjorie Maltais, with the expressive support of violist Hsin-Yun Huang and pianist Matan Porat. Bridge’s Elgar-era harmonies and textures perfectly matched words that dealt with finding solace in nature after separation (Matthew Arnold), questioning where the soul goes after death (Kate Freiligrath Kroeker, after Heinrich Heine), and discovering the persistence of love after the beloved has perished (Percy Bysshe Shelley).

The elegiac theme continued with movements 1, 12, and 9 of Antonín Dvořák’s Cypresses, gorgeously played by violinists Alexi Kenney and Yehonatan Berick, violist Dimitri Murrath, and cellist Oliver Herbert. Originally composed as eighteen vocal pieces in 1865, Dvořák recast a dozen of them for string quartet in 1887. Here the idea of romantic distance refers to the composer’s unsuccessful attempts to woo Josefina Cermak (he ended up marrying her younger sister, Anna). The third selection (“Oh, dear soul, my only one”) sounded gripping and visceral in the hands of this finely-matched quartet before ebbing into lilting music. 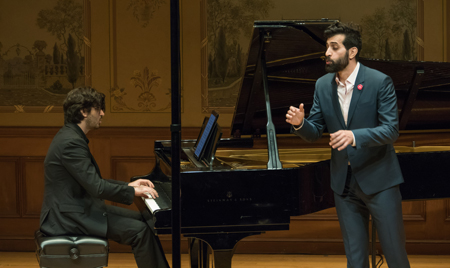 Beethoven broke new ground with his 1816 piece An die ferne Geliebte, joining six songs into a thematically-related, continuous cycle, thus paving the way for such works as Dichterliebe and Lieder eines fahrenden Gesellen. The dependably dramatic tenor Karim Sulayman (pictured above) joined Matan Porat in an uncommonly ardent proclamation of these songs “to a distant beloved.”

György Kurtág’s tiny “One More Voice from Far Away,” some 1/250th of his ongoing collection of musical aphorisms, was displaced from its printed position between Dvořák and Beethoven to form a peculiar little prelude to Johannes Brahms’s Piano Quartet in c after intermission. Distributed among the hands of pianists Matan Porat and Orion Weiss — the former reaching over the hands of the latter to play higher notes on the keyboard  while violist Dimitri Murrath intoned a wiry, muted line in between — the miniature’s amusing plinks and plunks indeed seemed far away from the spirit of the piece that followed. 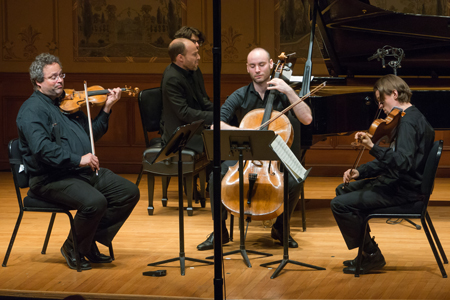 Murrath joined Berick, Weiss, and cellist Jakob Koranyi in an intensely physical reading of the Brahms, written while the composer was coming to terms with his ill-fated longing for Clara Schumann. Palpable hints of tragedy suffused the first movement, while the Scherzo was spine-tinglingly rhythmic. Koranyi infected the whole group in turn with his lyrical solo in the Andante, and the unmistakable “fate” motive — cribbed from Beethoven’s Fifth and beautifully relieved from time to time with chorale-like writing — drove the finale inexorably home.

Chamber music sounds wonderful in Reinberger, especially the quartet that so sonorously played the Brahms on Friday. More’s the pity that the hall is so infrequently used for that purpose.

END_OF_DOCUMENT_TOKEN_TO_BE_REPLACED

Rodgers & Hammerstein’s Cinderella was originally produced for television in 1957 — seven years after the animated Disney film was released — and starred Julie Andrews. According to the Rodgers & Hammerstein website, it was viewed by over 100 million people. END_OF_DOCUMENT_TOKEN_TO_BE_REPLACED

The story line has its origin in an 1855 play and an 1842 farce that Thornton Wilder mined for his 1938 play The Merchant of Yonkers. When that turned out to be a flop, in 1954 Wilder made the crucial decision to re-center the show around the character of the legendary marriage broker Dolly Gallagher Levi and renamed it The Matchmaker. END_OF_DOCUMENT_TOKEN_TO_BE_REPLACED

The Dodero Center for the Performing Arts at the Gilmore Academy in Gates Mills is one feature of an impressive campus. The auditorium is shallow, the stage is deep, and the ensemble played without a shell. Throughout the program, the sound, especially in instruments’ lower registers, tended to disappear. END_OF_DOCUMENT_TOKEN_TO_BE_REPLACED